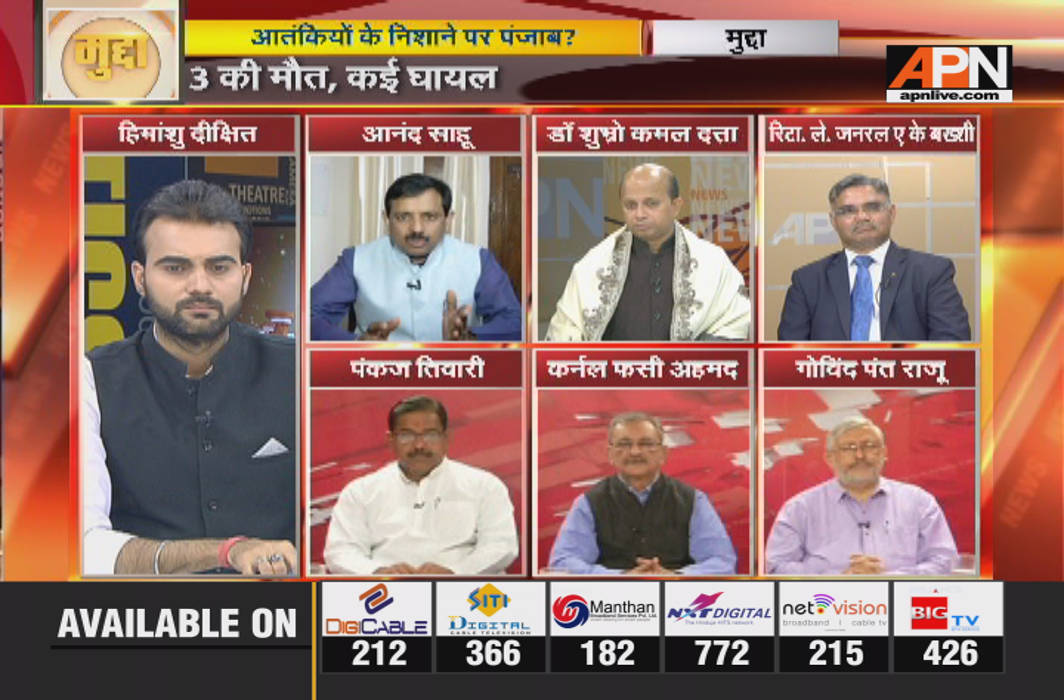 Panelists flay penchant of leaders to stoke secessionist fires, debate on whether there was actionable intelligence

Three people were killed and around 20 hurt in a grenade attack on a prayer hall in Amritsar’s Rajasansi village on Sunday. Eyewitnesses reportedly said that two men on a motorcycle threw a grenade at the Nirankari Bhavan, where a religious ceremony was going on at the time.  Aam Aadmi Party (AAP) leader HS Phoolka has said the Army chief could have “orchestrated the attack”.

Gen Bakshi said: “The problem should be nipped in the bud. Earlier two incidents happened in the state, this is the third. The J&K link cannot be ignored. It is the weakness in our psyche that makes us react only when we are faced with a problem. This is a failing of the police. We should not politicise such issues. The state government is responsible for security. There is usually no prior intelligence information that tells us that an attack is about to happen.”

Dutta said: “Pakistan has been looking for loose ends. The J&K nexus should be probed. Intelligence inputs were there, but the state government and Punjab Police were not alert. Political leaders who are stoking the fires should be thrown out.”

Col Ahmed said: “Actionable intelligence is extremely complex. Security forces were found wanting, but it is premature to lay the blame at the police’s feet. Terrorists look for unguarded moments, and vulnerable points include shopping centres and temple complexes. Pakistan and ISI look for our weak points.”

Sahu said: “It is a sad commentary of the times that political leaders seek to capitalise on incidents of such serious nature that threaten the security of the nation.” Dixit then said that minister Harsimrat Kaur has also reacted. To this, Sahu said his comments are general observations.

Gen Bakshi said: “The aim of terrorism is to show the state as weak. Democracy should be seen as vibrant and united. It’s like throwing a bomb, and fissures appear in political factions. This way we are playing in the hands of the enemy.”

Pankaj Tiwari said: “Ministers should be careful before rushing to comment.”

Raju said: “Investigations are on. So it can’t be said that this is part of an international gameplan. It could be Nirankari vs Akalis; something internal; or something external. It is too early to jump to any conclusions. But there are 2-3 things. People should not look to attack the Punjab administration with such speed. Such things can happen anywhere. Secondly, there were reports that intelligence had given some indications.”

Dixit said that the assailants knew that on Sunday they could cause maximum damage. How come the security was so weak?

Dutta said: “Punjab was on high security alert. The temple is close to the main highway. Still, if police could not act faster in defence, at the local level it shows serious lapses. Internationally, we call attacks of this kind as having a splinter effect or a domino effect. Either way, security should have been beefed up.”

Sahu said: “There should be no politics on incidents of this nature. Pakistan is trying to revive the Khalistan issue.”

Col Ahmed said: “Seems we don’t have the wherewithal to assess intelligence. After 9/11 America was clear that its focus remains on fighting terrorism. But here, we look to attack each other.”

Dutta said: “I agree with Col Ahmed. The centre needs the support of the state governments. A joint operation is called for in these kind of national issues related to terrorism, which should include IB, RAW and other elite forces.”

Raju said: “There is a mission in the US and in Canada to stoke up the Khalistan fires (Referendum 2020) and support is coming from Pakistan. We should work jointly to stop such issues from happening.”

Tiwari said: “It is a national matter, not just a state issue.”