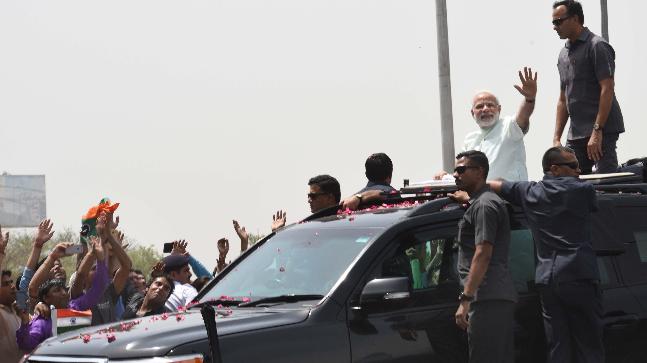 After the alleged threat of Narendra Modi’s assassination in “another Rajiv Gandhi-type incident” by the Maoists, Union Home Minister Rajnath Singh has issued new guidelines for PM’s security ahead of 2019 elections, PTI reported.

The home ministry has said that not even ministers and officers will be allowed to come too close to PM unless cleared by the Special Protection Group (SPG).

Endorsing the claim recently made by Maharashtra Police in Pune, the Union home ministry and the National Security Council (NSC) have said that the threat to Prime Minister Narendra Modi is at an “all-time high”. The home ministry has sent out a warning note to states spelling out security protocol that has to be strictly followed during PM Modi’s visits.

The home ministry has laid down that no one is allowed to come too close to PM Modi physically without due security clearance. Even ministers and officers have to be cleared by Special Protection Group (SPG) staff before they can come close to PM Modi.

The Special Protection Group is believed to have advised Modi to curtail his road shows that invite greater threat as he is the main campaigner for the ruling Bharatiya Janata Party (BJP). In addition, the prime minister has been advised to address public rallies instead, which are easier to manage, an official said.

Earlier, Maharashtra Police had claimed that documents seized from suspected Maoist operatives revealed an assassination plot to target PM Modi. They claimed that a letter talked about a “Rajiv Gandhi-type incident” to assassinate PM Modi during his roadshows.

Now, the home ministry has written to all state police chiefs warning them about an “unknown threat” to Modi.

BJP’s chief campaigner PM Modi is all set for the upcoming Lok Sabha election campaign next year and in Naxal-affected states of Madhya Pradesh and Chhattisgarh before the general elections.

Prime minister’s security apparatus was reviewed in the recent past after the Pune Police told a court on June 7, that they had seized a “letter” from the Delhi residence of one of the five people arrested for having alleged “links” with the banned CPI (Maoist), another official said.

Home Minister Rajnath Singh had directed that all necessary measures be taken in consultation with other agencies to suitably strengthen security arrangements for the prime minister.