Home Gadgets Three scientists get Nobel prize in Physics, one for discoveries about origin... 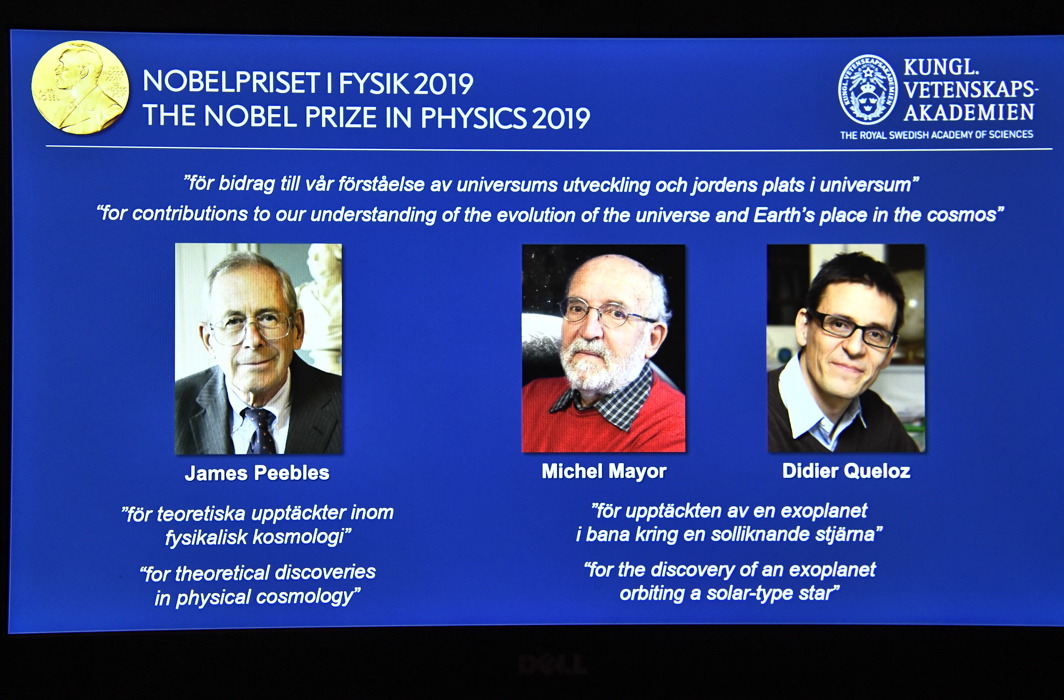 Three scientists were today – Tuesday, Oct 8 – awarded the 2019 Nobel prize in physics for groundbreaking discoveries about the evolution of the Universe and the discovery of the first planet outside our solar system.

Canadian scientist James Peebles has been awarded half of the 9 million Swedish kronor (about $914,000) prize for his theoretical discoveries about the evolution of the universe.

Peebles contribution laid a foundation for modern cosmology, finding out that the faint microwave radiation that filled the cosmos just 400,000 years after the Big Bang contains crucial clues to what the universe looked like at this primitive stage and how it has evolved over the subsequent 13bn years.

The Nobel Prize twitter handle said: 2019 #NobelPrize laureate James Peebles took on the cosmos, with its billions of galaxies and galaxy clusters. His theoretical framework, developed over two decades, is the foundation of our modern understanding of the universe’s history, from the Big Bang to the present day.

2019 #NobelPrize laureate James Peebles took on the cosmos, with its billions of galaxies and galaxy clusters. His theoretical framework, developed over two decades, is the foundation of our modern understanding of the universe’s history, from the Big Bang to the present day. pic.twitter.com/fly4alndv9

A Swiss duo of astronomers, Michel Mayor and Didier Queloz, will share the other half of the prize for their joint discovery in 1995 of the first exoplanet 50 light years away in the constellation of Pegasus. The planet, 51 Pegasi b, is a gaseous ball about 150 times more massive than the Earth and with a scorching surface temperature of 1000C.

This ushered in a new era of astronomy, with astronomers having since found more than 4,000 exoplanets, with an incredible range of sizes, forms and orbits. Learning about these strange and varied world’s beyond our solar system has transformed our understanding of how planets formed. This has also brought into focus the question of whether there could be alien life is out there somewhere.

The discovery by 2019 #NobelPrize laureates Michel Mayor and Didier Queloz started a revolution in astronomy and over 4,000 exoplanets have since been found in the Milky Way. Strange new worlds are still being discovered, with an incredible wealth of sizes, forms and orbits. pic.twitter.com/nqhJcJGJTv

Peebles is also credited with developing the theoretical tools that allowed scientists to perform a cosmic inventory of what the universe is made from, showing that ordinary matter makes up just 5% of its known contents, with the rest being dark matter and dark energy.

On Monday, Americans William Kaelin and Gregg Semenza and Britain’s Peter Ratcliffe won the Nobel prize for physiology or medicine for discovering details of how the body’s cells sense and react to low oxygen levels, providing a foothold for developing new treatments for anaemia, cancer and other diseases.

Finally, the Sveriges Riksbank Prize in Economic Sciences in Memory of Alfred Nobel 2019 will be announced on October 14, wrapping up the Nobel Prize season.