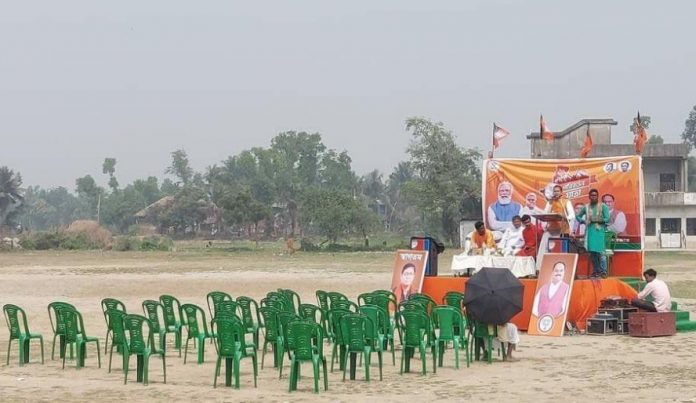 Ahead of Bengal assembly polls, Twitter war is on between Bharatiya Janata Party (BJP) and Trinamool. After the release of Pishi Jao (Aunty, leave) song by the BJP, Trinamool has retorted back with the latest pawri trend. TMC mocked the saffron party by posting image of empty chairs and stage from a party meeting.

Earlier, BJP released the Bengali version of popular protest song Bella Ciao with the caption – A tune from Communist Italy, sung to protest against atrocities, echoes once again in West Bengal as people stand up to the injustices of the ruling dispensation. Our ideologies may differ, but the language of protest always rings true.

In the animated video, all the problems being faced by the state under chief minister Mamata Banerjee’s leadership were highlighted. The song urged Pishi to leave. The song came after TMC launched its slogan for the upcoming polls in the state – Bangla Nijer Meyekei Chaye’ (Bengal wants its own daughter) portraying Banerjee as state’s own daughter.

The two parties are currently locked in a war of words with BJP repeatedly attacking Mamata for nepotism and accusing her of trying to promote her nephew Abhishek Banerjee’s interests. Several BJP leaders, who have quit the Trinamool have also hit out at the Bengal chief minister and Abhishek Banerjee.

Bengal is set to go to polls in April-May this year. Wile, BJP is aiming to come to power in the state and win 300 seats, TMC will be looking at winning a third term.