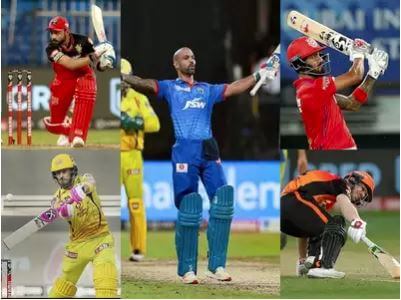 The Indian Premier League 2020 witnessed some outstanding batting performance from Indians and foreigners after six months of inactivity in cricket due Covid-19 pandemic. Let’s take a look at the batsmen who have been the most impressive so far in this season of IPL.

Kings XI Punjab skipper KL Rahul performed consistently in this IPL. He is a top scorer and is holding the orange cap of the IPL 2020. Currently, he is leading the run chart with 595 runs at an average of 59, the highest in the history of the IPL. He scored a not out 132 runs in just 69 balls against Royal Challengers Bangalore which is the highest individual score of this season. With 5 fifties and a century, Rahul is way ahead of his competitors.

Delhi capitals opener Shikhar Dhawan struggled at the beginning of the tournament but he bounced back with some outstanding batting performances. Dhawan is the second in the race of orange cap. With two back to back centuries against Chennai Super Kings and Kings XI Punjab, he scored 471 runs at an average of 52 in 12 matches.

The orange cap holder of the last season David Warner smashed 66 off just 34 balls on Tuesday against Delhi Capitals, guiding Sunrisers Hyderabad to a 88-run win along with keeping their play-offs hopes alive. He has scored 436 runs in 12 matches including three half-centuries. He is on third in race of orange cap.

Royal Challengers Bangalore’s skipper Virat Kohli is sensational in this IPL and proved his class and consistency throughout the tournament. RCB has done pretty well in this season of IPL under the brave captaincy of Virat Kohli. With 415 runs in 11 matches so far, Kohli is fourth on the list of highest-run scorer. Kohli was struggling with the bat in the initial phase of the tournament. He scored three fifties with highest score of 90 runs.

IPL 2020 has proved the worst season for Chennai Super Kings. The most consistent team of the IPL has becoming the first team to be eliminated from the play-offs race in this IPL. However, the performance of their top order batsman Faf du Plessis is the only positive for the team. He is the fifth highest run scorer in the race of purple cap. With four fifties, he has scored 401 runs in 12 matches.