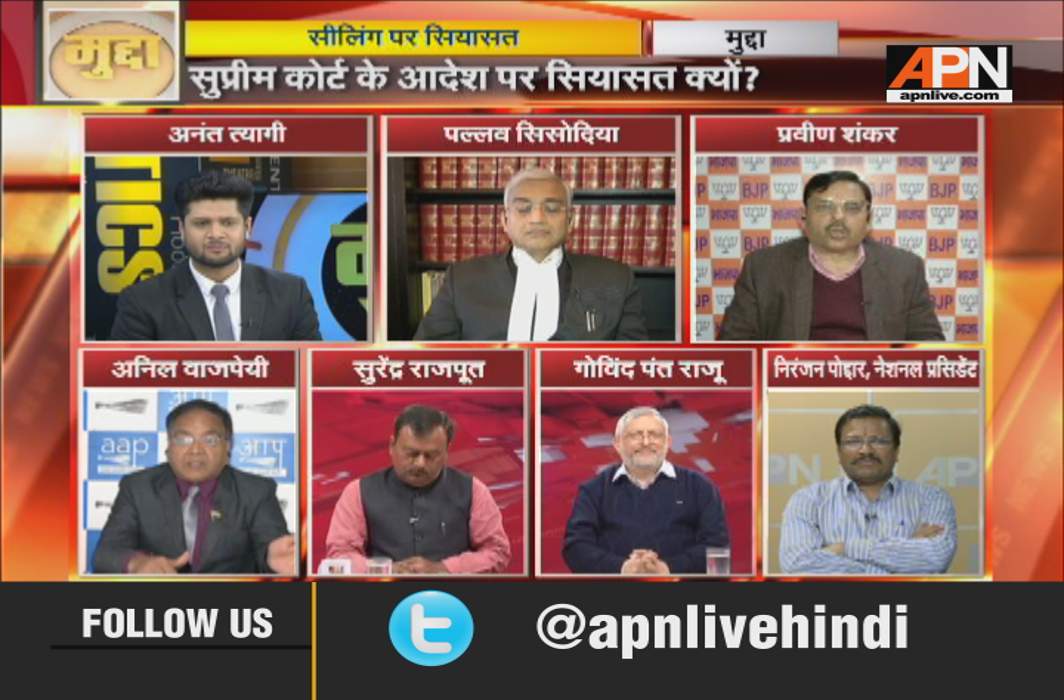 Mudda panellists feel that the sealing drive in Delhi should not lead to blame game amongst parties, AAP government should issue an ordinance to take control of the situation

It’s AAP vs BJP as Chief Minister Arvind Kejriwal plans to move Supreme Court over the sealing drive in Delhi. Kejriwal claimed the BJP refused to discuss the issue with him, thus forcing him to approach the Supreme Court.

The BJP and AAP leaders met at Kejriwal’s residence to find a solution to the ongoing sealing drive. However, the discussion took a chaotic turn as leaders from both the parties exchanged heated words, and the meeting barely lasted ten minutes before BJP Delhi state president Manoj Tiwari and his delegation walked out of the CM’s house.

Shanker claimed the BJP is not doing politics on this issue. “The Delhi government is answerable, as it is not doing anything to regularise unauthorised buildings,” he said.

Bajpayi said the BJP charges are false. “AAP leaders were hurt in scuffle. People are being looted in the name of conversion charges,” he said.

Poddar said neither the BJP nor the AAP is doing anything. “We are being made scapegoats. The first to suffer is the trader community. We are soft targets,” he said.

Rajput said traders’ demands need to be considered. “The BJP and AAP are worried about personal gains. Gandhiji used to go to Jinnah’s house, come back empty-handed, and vowed to do so repeatedly till a solution was found. If Tewari felt insulted, he should have spoken with Kejriwal. It’s nothing but vote politics,” he alleged.

Raju said the main problem is of bribe and corruption. “Traders were going on with unauthorised construction in full knowledge of the MCD. In Lucknow, too, hundreds of buildings are unauthorised, but the authorities take money and give clearances. Decorum should be maintained in these matters right at the start,” he said

Bajpayi said that the DDA should send a proposal.

Poddar said the AAP leaders said they will meet the L-G who is dilly-dallying. “Post sealing, where can the traders go? In Walled City, conversion charge is higher than the value of the property.”

Shanker said he understands trader’s issues and woes regarding conversion charges. “However, it is with the conversion charges that the Delhi government has made available additional parking places at so many busy spots in Delhi.”

Raju said no one is serious in resolving the issue. Both parties need to take the effort.

Rajput said “if all parties want to show support to traders, then why are they being anti-trader? This is nonsense. AAP is not doing anything,” he stated.

Poddar asked why the AAP can’t bring in an ordinance. People can see through their political shenanigans, he said.

Shanker quoted Manoj Tewari as saying that he will do anything to regularise unauthorised Delhi colonies.

Bajpayi said that the BJP is welcome, but should not be indulging in bullying tactics.

Raju said, “Delhi traders want a solution. January 23 was declared a bandh. But political parties are weighing the issue against their own interests. Kejriwal should send a proposal at the earliest. Some people will not get clearances, but a lot of people will get relief,” he stated.