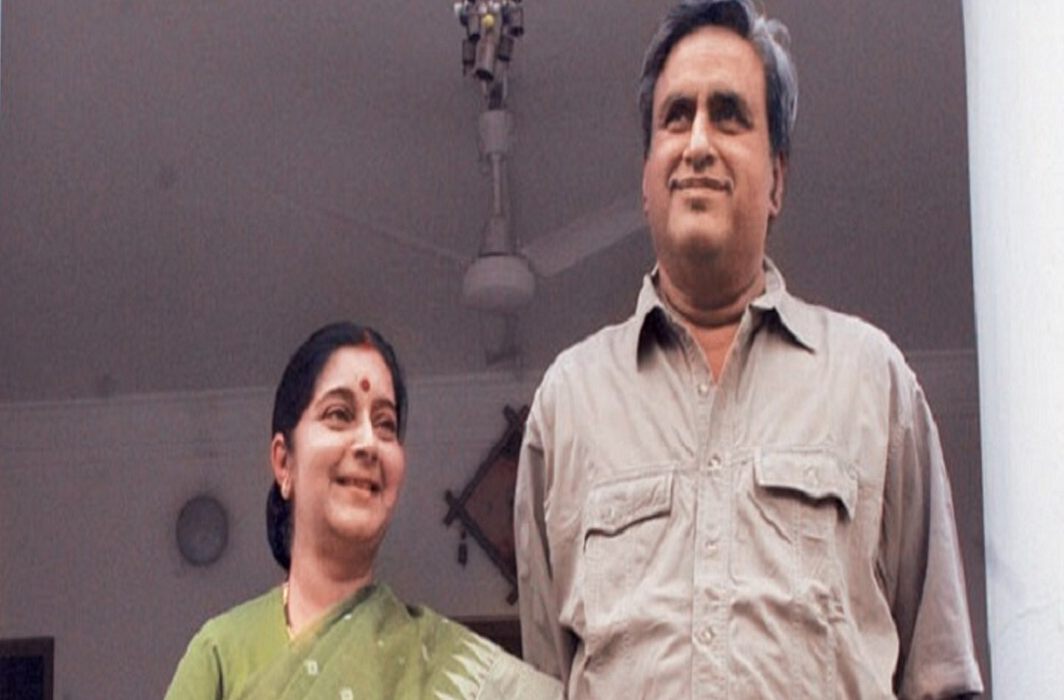 Subjected to vicious trolling by social media users, External Affairs Minister Sushma Swaraj’s husband and former Governor Swaraj Kaushal have responded with dignity, the pain showing through and eliciting sympathy and support from a wide section – except the Modi government and the BJP to which she belongs.

Union Home Minister Rajnath Singh was probably the only one who extended his sympathy to Swaraj, some media reports on tweets trolling the external affairs minister said.

A particularly obnoxious tweet tagged Sushma Swaraj’s husband and said: “When she comes home tonight why don’t U beat her up & teach her not to do Muslim appeasment tell her Muslims will never ever vote for BJP… who else can teach @SushmaSwaraj a lesson or two…”.

The user, identifying himself as Mukesh Gupta, a graduate from the Indian Institute of Technology – Delhi has since deleted his account. According to sources, Twitter had also received several complaints about the tweet, which are being processed, reports have said.

The abusive tweet was one among several targeting the foreign minister over the grant of passport to an inter-faith couple last month. Among the tweets were direct threats of violence to the Minister, communal slurs and memes mocking her with derogatory pictures and language.

“Your words have given us unbearable pain. Just to share with you, my mother died of cancer in 1993. Sushma was an MP and a former Education Minister. She lived in the hospital for a year. She refused to engage a medical attendant and attended on my dying mother personally.”

A second tweet read: “Such was her devotion to the family. As per my father’s wish, she lit my father’s pyre. We adore her. Please do not use such words for her. We are first generation in law and politics. We pray for nothing more than her life. Pls convey my profound regards to your wife.”

Facing online abuse since the passport controversy, the external affairs minister conducted a poll on Twitter asking users whether they “approve” such trolling. In the poll, which was conducted for 24 hours after Sushma initiated on Saturday night, 1,24,305 Twitter users took part, with 57 percent respondents backing her, while 43 percent supporting the trolls. After the poll, Swaraj tweeted: In a democracy difference of opinion is but natural. Pls do criticise but not in foul language. Criticism in decent language is always more effective.

In a democracy difference of opinion is but natural. Pls do criticise but not in foul language. Criticism in decent language is always more effective.

She also tweeted a few lines by Hindi poet Neeraj to emphasise her point. Sushma, who has been retweeting some of the offensive tweets directed at her over the transfer of Passport Seva Kendra official Vikas Mishra in Lucknow for allegedly humiliating the interfaith couple, began the Twitter poll asking people whether such trolling was fine. “Friends : I have liked some tweets. This is happening for the last few days. Do you approve of such tweets? Please RT,” she tweeted.

Through this ordeal, Swaraj has found no support from her Cabinet or party colleagues. The Hindu newspaper said it reached out to BJP leaders, including the IT cell in charge Amit Malviya, for comments, but drew no response.

It said there were reports that many of the accounts that had issued abusive tweets belonged to supporters of the BJP, and were followed by members, and none have tweeted or issued statements in her favour.

Several members of the Opposition and the Congress’s official handle had condemned the tweets after Swaraj highlighted them on her twitter handle.

West Bengal Chief Minister Mamata Banerjee had come out in support of Swaraj. Mamata wrote on Twitter: “Strongly condemn the language used on the social media against @sushmaswaraj Ji . She is a senior politician. We must respect each other and must never indulge in any form of verbal abuse.”

Former Jammu and Kashmir chief minister Mehbooba Mufti also said she was horrified by the “vicious” trolling of Swaraj on social media and described it as outrageous. “Horrified by the vicious trolling @SushmaSwaraj ji has been subjected to,” former Jammu and Kashmir Chief Minister and former BJP ally Mehbooba Mufti tweeted on Sunday, adding that “If our own Minister of External Affairs is not spared, what hope is there for any other woman?”

Meanwhile, when asked if the Ministry of External Affairs (MEA) would take up the case of its Minister officially with either Twitter or other social media platforms where she is being targeted, MEA spokesperson Raveesh Kumar told The Hindu that any action would be taken personally by the Minister.

According to a report on news portal ThePrint, Union home minister Rajnath Singh had reached out to his cabinet colleague Sushma Swaraj, the external affairs minister, last week to express sympathy on the vicious abuse she has been facing from online trolls.

“I called her soon after she first tweeted last week about the abuse she was facing,” Singh told ThePrint, adding, “When we met, I also asked her what this was all about. I expressed my sympathy.”

He, however, refused to say why he did not express support online or comment on the mounting abuse on Twitter.