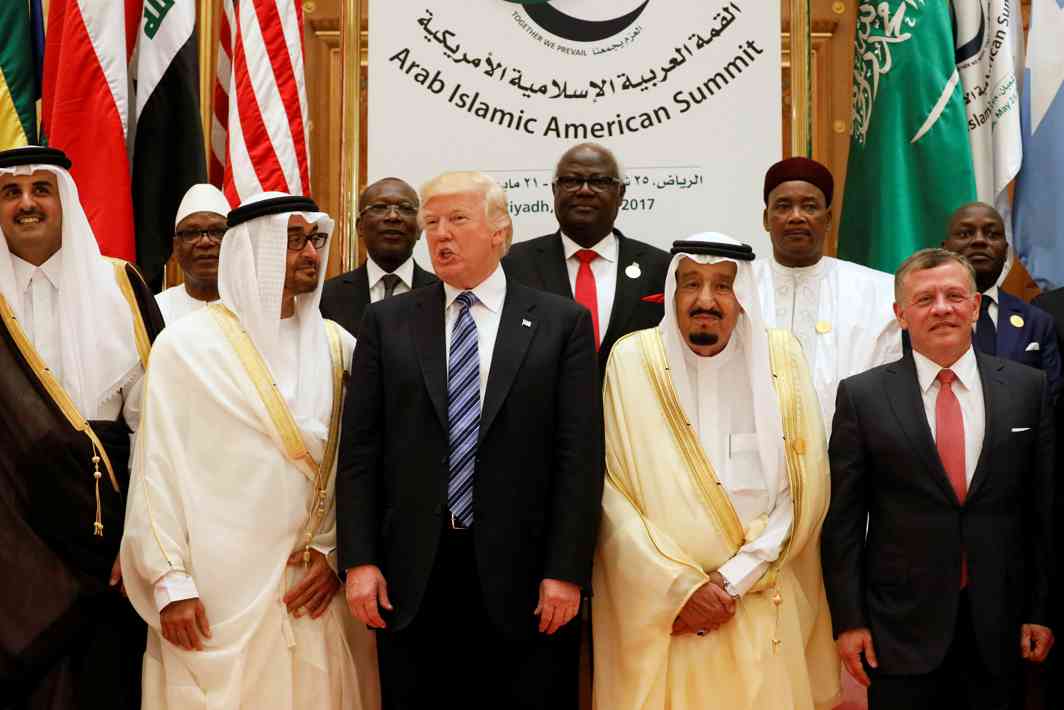 A sense of losing a friend in the troubled gulf was considered to be affecting White House these days. It was virtually felt when President Donald Trump called King Salman bin-Abdulaziz of Saudi Arabia on Wednesday and urged “all the parties in the Qatar dispute” to find a “diplomatic solution” to the ongoing regional standoff.

On June 5, Saudi Arabia, Bahrain, Egypt and UAE had suddenly severed their diplomatic, business and travel ties with Qatar alleging Doha of supporting terrorist groups. The move came after Trump’s visit to Saudi Arabia in the third week of May when over 50 heads of Arab and Muslim states came together in Riyadh.

Later, the quartet put forwarded 13-point charter of demands for starting dialogue with Qatar. They demanded from Doha, among others, severing ties with Iran, closing new Turkish army base in its territory and shutting down Aljazeera news network.

According to white House readout issued on Wednesday, “The President urged that all parties to the Qatar dispute find a diplomatic resolution that follows through on their commitments made at the Riyadh Summit, to maintain unity while fighting terrorism. The two leaders also addressed the threat Iran poses to the region.”

Trump’s call to King Salman for resolving Qatar crisis came at a time when Doha has, on August 24, announced to send its Ambassador to Tehran after a gap of 20 months. Qatar-Iran ties were downgraded in the aftermath of Saudi Arabia severing ties with Tehran following huge protests in front of its missions in Tehran and Mashhad in early 2016.

The violent Iranian protesters set the mission on fire in Tehran. They were angry over the execution of a senior Shia cleric Sheikh Nimr, on January 2, 2016.

Meanwhile analysts believe that Trump administration was concerned about Qatar’s growing ties with Iran especially after the regional standoff was triggered by Saudi led quartet. Iran has been supplying most of the food items to Qatar after the blockade came into effect by the four countries. Tehran had also opened its air space to Qatar Airways.

Aljazeera, the Qatar based TV network,  quoted Giorgio Cafiero, the CEO of Gulf State Analytics (GSA) saying, “We need to see this within the context of Qatar making a decision about one week ago to return its envoy to Tehran afer nearly 21 months of him been pulled back to Doha.”

He further said, “The trump administration is very concerned about something that’s going on in the Gulf – that is the growing relationship between Qatar and Iran as a consequence of the current crisis in the GCC.”

GSA is a Washington based geopolitical risk consulting firm which assesses risks and opportunities among GCC states for lenders, traders, investors, policymakers and other stake holders.

Tehran based Press TV says that experts have touted the Qatar crisis as the fallout of Trump’s visit to Riyadh. It was indicated by Trump’s tweets in the early days of the crisis.

Reacting to June 5 developments, Trump tweeted on June 6 saying, “During my recent trip to the Middle East I stated that there can no longer be funding of Radical Ideology. Leaders pointed to Qatar — look!”

However, US Secretary of State Rex Tillerson said before Trump’s  Riyadh visit that it was aimed at getting Saudi Arabia and other Arab nations in the region to stand in “unity” with Israel and confront Iran.

Qatar houses US Navy’s fifth fleet, which is responsible for its naval forces in Persian Gulf, Red Sea, Arabian Sea and parts of Indian Ocean since 1995. It shares a commander and headquarters with US Naval forces Central Command in Bahrain.