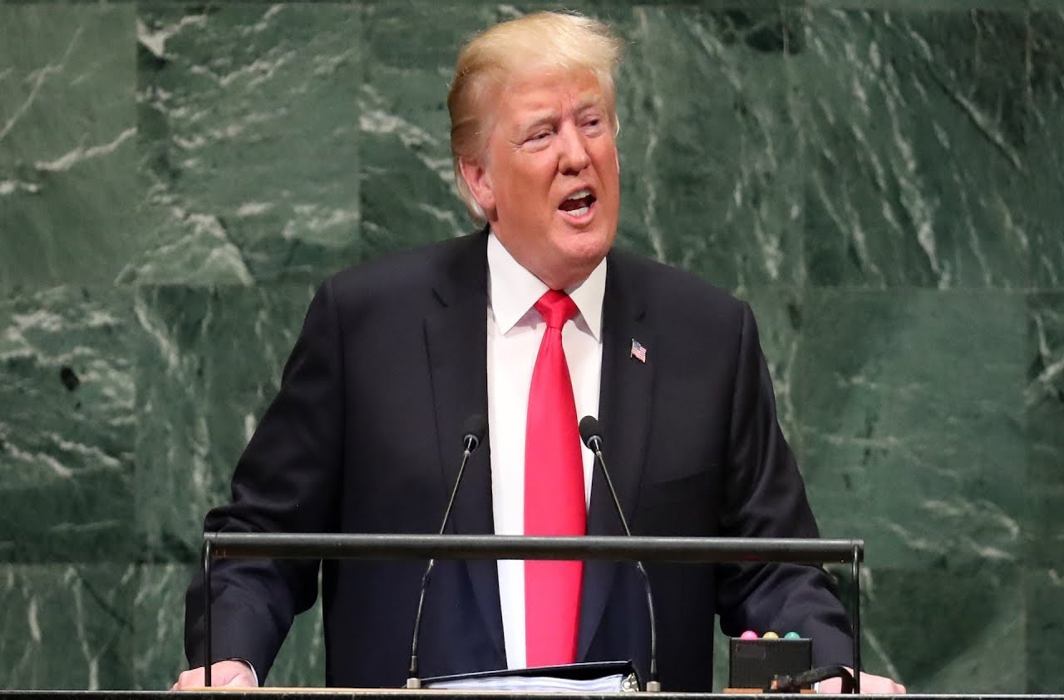 Trump embarrassed as world leaders laughed on his “achievement” claims

According to reports coming in all speculations of a possible bilateral meeting between the two leaders at the world body devolved into a war of words over Trump’s decision to withdraw from the 2015 nuclear deal and to re-impose economic sanctions on Iran.

While addressing the UN General Assembly, US President Donald Trump fired the first volley, repeating his administration’s contention that Iran is the world’s “leading sponsor of terrorism”.

He went on accusing Tehran saying, “Iran’s neighbours have paid a heavy toll for the regime’s agenda of aggression and expansion,”  and having “embezzled billions of dollars” from the country’s treasury to wage proxy wars.

“The dictatorship used the funds to build nuclear-capable missiles, increase internal repression, finance terrorism, and fund havoc and slaughter in Syria and Yemen,” he said.

He said, “We ask all nations to isolate Iran’s regime as long as its aggression continues.” He promised Iran would face more difficulties when the second round of sanctions targeting its energy sector will be re-imposed on November 5.

Iranian President Hassan Rouhani responded back at Trump saying his decision to impose more sanctions is a form of “economic terrorism”. He also accused US administration of trying to topple his government.

Rouhani further said,”It is ironic that the US government does not even conceal its plan for overthrowing the same government it invites to talks.”

Avoiding naming Trump, he said some world leaders are undermining world security by their “recklessness and disregard of international values and institutions.”

He further said, “Confronting multilateralism is not a sign of strength, rather a symptom of the weakness of intellect. The government of the US – at least the current administration – seems determined to render all international institutions ineffectual.”

Rouhani said he was pleased that the international community did not follow the Trump administration’s “unilateral and illegal withdrawal from the JCPOA”.

In May, the US President Donald Trump had pulled out of the multilateral Iran nuclear deal signed in 2015 by five permanent UNSC members and Germany, generally known as P5+1. It was implemented in January 2016 paving the way for relaxing sanctions against Iran.

Earlier there was speculation whether the two leaders would meet during UNGA in New York. Trump said he would be willing to meet without preconditions. But Iranians refused to meet until US rejoins the nuclear deal.

Meanwhile, the five remaining parties to JCPOA – France, Britain, Germany, China and Russia – agreed during a meeting with Iranian foreign minister Javad Zarif in New York late on Monday to set up a payment system to preserve business ties with Iran despite US sanctions.

Meanwhile, in an unprecedented incident, Donald Trump faced embarrassment when world leaders laughed at him while he claimed several achievements of his government during last two years.

The audience almost immediately burst into derisive laughter, in a moment that is set to go down in history as one of the most embarrassing moment for any American leader on the global stage.

Stumped but laughing along with the crowd, Trump tried to move past it by saying, “I didn’t expect that reaction, but that’s OK.”