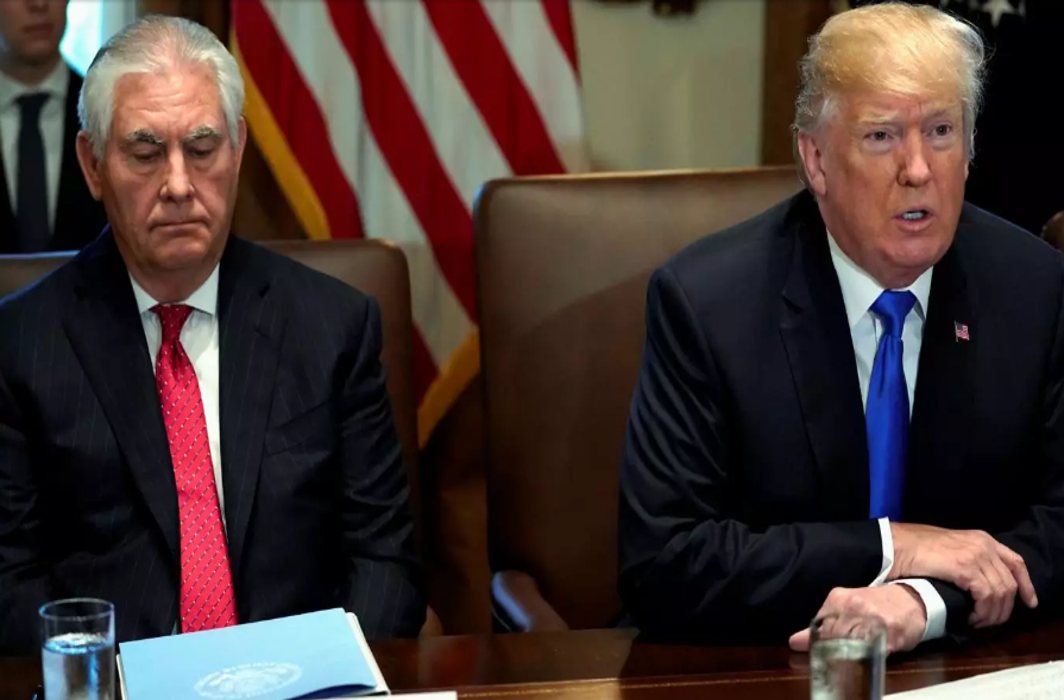 Taking an expected move US President Donald Trump has sacked Secretary of State Rex Tillerson, citing differences, and replaced him with Mike Pompeo,  the CIA director.

According to Washington Post, Trump asked Tillerson to leave the office last Friday forcing him to cut short his Africa visit and return on Monday. Though, decision was not made public but questions were being raised about his future.

There were reports in October last year about Trump looking for his replacement. Tillerson, former top executive of energy giant Exxon, joined as Secretary of State in February last year. Trump’s move is considered to be the biggest shake-up in his cabinet.

Differences between Donald Trump and Rex Tillerson were made public in October last year. Tillerson, while attending Pentagon meeting called Donald Trump a “moron” causing all time high discord between the two leaders.

President Donald Trump announced his decision of the shake-up through his tweet.

This was reiterated by Trump on Tuesday when he said, “We disagreed on things,” adding that they “were not really thinking the same”.

Tillerson had criticised Saudi Arabia, UAE, Bahrain and Egypt for severing diplomatic and trade ties with Qatar in June last year from the very beginning. He was in favor of easing the blockade which was against Trump’s initial support for the move. Saudi led quartet took the tough decision days after Trump’s maiden foreign trip to the Kingdom meeting more than 50 heads of Muslim states in Riyadh.

Tillerson was not supporting Trump’s move on Iran Nuclear deal signed by P5+1 with Tehran during earlier dispensation of Barack Obama. Tillerson had repeatedly dispelled speculation that Trump would completely scrap the agreement.

On the other hand, unlike Tillerson, Mike Pompeo is very close to Trump’s thinking on these issues. Pompeo has been a staunch critic of the 2015 Iran deal, calling it “disastrous”. He had reportedly said in October that Iran was “mounting a ruthless drive to be the hegemonic power in the region”.

Pompeo is also known to be one of the most hawkish voices on North Korea in Trump’s inner circle. He was criticised by the Muslim community and others in 2013, for saying that their silence on violence committed by “extremists” was “deafening”.

He reportedly said, “Instead of responding, silence has made these Islamic leaders across America potentially complicit in these acts, and more importantly still, in those that may well follow.”

Associated France Press (AFP) has quoted an unknown source in Washington saying “The president wanted to make sure to have his new team in place in advance of the upcoming talk with North Korea.”  Recently Trump had accepted an invitation to meet North Korea’s Kim Jong-un, after a long diplomatic standoff.

Lawrence Korb, a former US assistant secretary of defence told Aljazeera that Trump’s decision to dismiss Tillerson is “evidence of poor judgement. It will be very hard for Director Pompeo to be confirmed and be in charge by the time they have this meeting, which will be in less than two months.”

“And it’s not just a question of Pompeo. The question is what other people do you have? For example, we don’t have any ambassador to South Korea yet. The person in the state department in charge of North Korea retired in February.”

Trump said in a statement on Tuesday that Pompeo has a “proven record of working across the aisle. I have gotten to know Mike very well over the past 14 months, and I am confident he is the right person for the job at this critical juncture.”  Trump told reporters outside the White House that he and Pompeo “have a similar thought process”.

Mike Pompeo is a graduate of the US Military Academy at West Point and Harvard Law School. He also served as an army officer.

However, Both Pompeo and Haspel will need to be confirmed by the Senate.

London based Telegraph reports that it was a catchphrase from his days as host of The Apprentice, a reality talent game show, and now in White House, Donald Trump has shown he’s still happy to tell someone: You’re fired.

The list of departures, including dismissals and resignations, from his administration has been rising rapidly. FBI Director James Coomey, while leading investigation into possible collusion between Trump campaign team and Russians was fired in May last year. Sally Yates, US Attorney General was fired in January after she ordered Justice Department lawyers not to enforce Trump’s controversial immigration ban.

Micheal Flynn, National Security Advisor resigned in February after his disclosure that he had discussed US sanctions on Russia with the Russian ambassador to US before Trump took office. Preeet Bharara, former leading prosecutor was sacked after he refused an order from Attorney General to resign.

Rex Tillerson is the 20th important casualty in Trump’s administration who is ousted from his position. Observers believe that the only exception in his case is that he could successfully delay his departure by five months despite his “moron” comments because of his sudden “damage control” measures.