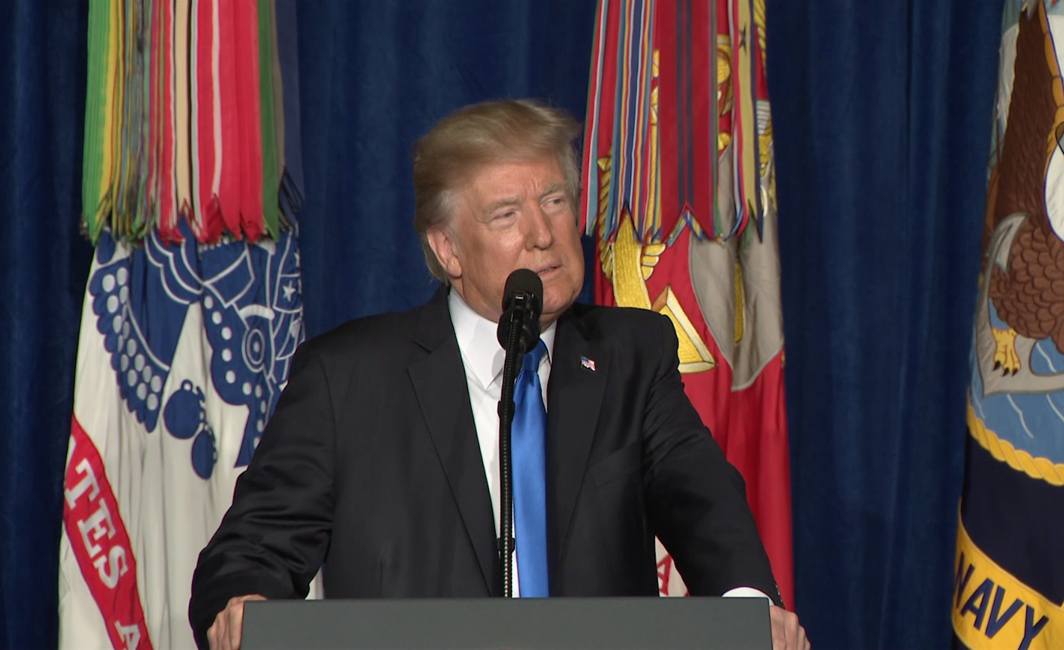 US President Donald Trump has appreciated India’s contribution to stability in Afghanistan and desired that New Delhi should extend more economic assistance for pursuing “shared objectives” for peace and security in South Asia and broader “Indo-Pacific region.”

While addressing the nation on new US strategy on Afghanistan on Monday evening, Trump referred to India saying “Another part of the South Asia strategy for America is to further develop its strategic partnership with India—the world’s largest democracy and a key security and economic partner of the US.”

He further said “We appreciate India’s important contributions to stability in Afghanistan, but India makes billions of dollars in trade with the US, and we want them to help us more with Afghanistan, especially in the area of economic assistance and development.  We are committed to pursuing our shared objectives for peace and security in South Asia and the broader Indo-Pacific region.”

While referring to Washington’s new approach towards Pakistan, President Trump said that our new strategy is to change approach on how to deal with Pakistan. He said, “We can no longer be silent about Pakistan’s safe havens for terrorist organizations, the Taliban, and other groups that pose a threat to the region and beyond.  Pakistan has much to gain from partnering with our effort in Afghanistan.  It has much to lose by continuing to harbor criminals and terrorists.”

Further elaborating his opinion on Pakistan, Trump said, “We have been paying Pakistan billions and billions of dollars at the same time they are housing the very terrorists that we are fighting.  But that will have to change, and that will change immediately.” He further said that, “No partnership can survive a country’s harboring of militants and terrorists who target U.S. service members and officials.  It is time for Pakistan to demonstrate its commitment to civilization, order, and to peace,” he said.

President Trump said that “American people are weary of (Afghanistan) war without victory—the longest war in American history—17 years. I share the American people’s frustration.” After studying “in great detail” and several meetings “over many months” I have arrived at “three fundamental conclusions.”

Describing his administration’s conclusions, President said that our nation must seek an honorable and enduring outcome with an aim of fight to achieve victory, avoid hasty withdrawal by not repeating the mistakes committed in Iraq, and face the immense security threats posed by “20 US designated foreign terrorist organizations which are active in Afghanistan and Pakistan.”

He prescribed the three point solution for Afghanistan crisis. The policy shift suggested by the President Donald Trump included “shift from time based approach to one based on conditions.”  He said that there would be “No talk about numbers of the troops or our plans for further military activities. Conditions on the ground—not arbitrary timetables—will guide our strategy from now on.”

He also suggested “integration of all institutions of American power—diplomatic, economic and military—toward a successful outcome” in Afghanistan.

However, Trump indicated of possible political settlement “that includes elements of the Taliban in Afghanistan, but nobody knows if or when that will ever happen.” He also indicated that US was working on a limited agenda saying, “We are not nation building again. We are killing terrorists.”

Washington had, during Barak Obama administration, suggested peace talks with Taliban for resolving the crisis. Their representative office was set up in Doha, the capital of Qatar. However, the proposal was suddenly dropped because of some diplomatic reservations.

President Trump said, “Ultimately, it is up to the people of Afghanistan to take ownership of their future, to govern their society, and to achieve an everlasting peace.  We are a partner and a friend, but we will not dictate to the Afghan people how to live, or how to govern their own complex society.”

Moreover Trump favored to extend more decision making power to the commanders on the ground. He argued to “expand authority for American armed forces to target the terrorist and criminal networks that sow violence and chaos throughout Afghanistan.” He said “Micromanagement from Washington, D.C. does not win battles.”

US president summed up his Afghan policy saying, “From now on, victory will have a clear definition:  attacking our enemies, obliterating ISIS, crushing al Qaeda, preventing the Taliban from taking over Afghanistan, and stopping mass terror attacks against America before they emerge.”

However, some of his observations were driven by his political compulsions. He observed that “9/11, the worst terrorist attack in our history, was planned and directed from Afghanistan because that country was ruled by a (Taliban) government  that gave comfort and shelter to terrorists. A hasty withdrawal would create a vacuum that terrorists, including ISIS and al-Qaeda, would instantly fill, just as happened before September 11th.” He further said, “In 2011, America hastily and mistakenly withdrew from Iraq. As a result, our hard won gains slipped back into hands of terrorist enemies.”

Rather it would be worth to recall that Iraqi government headed by Prime Minister Nouri al-Maliki did not oblige US “by requesting to extend their stay” in that country. He had clearly said that Iraqi parliament was divided on the subject.

In fact Iraq was the first country in US military overseas interventions where they were forced to leave on the first departure schedule.

President Donald Trump also did not choose to speak about the role of Saudi Arabia and other GCC countries in spreading terrorism. He has recently visited Saudi Arabia where more than 50 heads of Arab and Muslim countries were invited. During the visit Trump had also signed $ 110 billion weapons deal with Saudi Arabia.

Recently, Mutlaq Majed al-Qahtani, the special envoy of Qatari Foreign Minister, in an opinion piece in Wall Street Journal recalled that “Fifteen of the 19 hijackers in the 9/11 attacks were Saudis. Thousands of Saudi citizens have  taken up arms to join Islamic State (IS) and other radical groups.”

The Qatari diplomat also elaborated UAE’s role in supporting terrorism by saying, “Two Emiratis participated in the September 11 hijackings, and the staff report to the 9/11 Commission revealed that much of the funding for the attacks flowed through the UAE, which was a world hub for money laundering.”