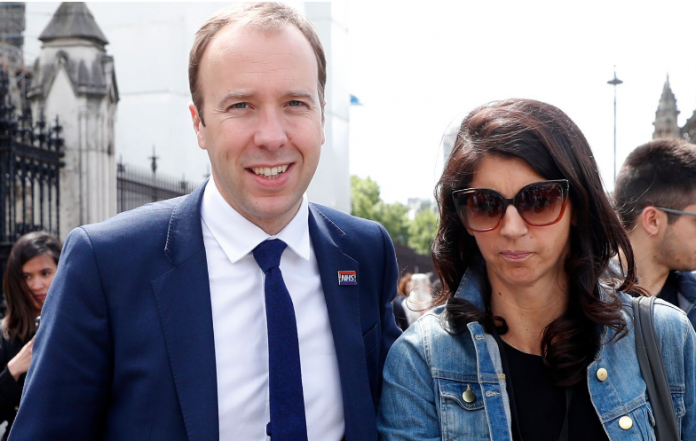 The United Kingdom health minister Matt Hancock resigned from his post on Saturday over the allegations of breaking country’s Covid protocols.

His resignation comes after the Britain’s health minister caught breaking Covid-19 rules by kissing and embracing an aide in his office.

In his resignation letter to UK Prime Minister Boris Johnson, Hancock said Britain have worked so hard as a country to fight the pandemic.

Hancock, 42, wrote to Prime Minister Boris Johnson to resign after The Sun newspaper published photos on Friday of the married minister embracing senior aide Gina Coladangelo, who he had appointed to a taxpayer-funded role to scrutinize the performance of his department.

Johnson had said on Friday he had accepted an apology from the minister and considered the matter to be closed, but Hancock had faced rising pressure to quit.

Hancock has been at the centre of the government’s fight against the pandemic, routinely appearing on the television to tell people to strictly follow Covid protocols to contain the virus.

It will be really challenging for Johnson to appoint a new minister to take the charge of a huge department that is responsible for overseeing the health service and tackling the virus, at a time when cases have started to rise again. The controversy may also harm the health department’s efforts to tackle the pandemic and undermine its messaging about the importance of maintaining social distancing.

Hancock, who ran against Johnson for the Tory leadership in 2019, had already been under pressure over his handling of the crisis. Johnson’s former aide, Dominic Cummings, earlier this month published text messages he said showed the premier regarded Hancock as hopeless. Cummings also accused Hancock of lying and incompetence at the height of the Covid outbreak last year.

Hancock and Coladangelo had been friends since their time together at Oxford University and both are married with children. At the time the photos were taken, pandemic rules advised against meeting people from different households indoors.

With 128,000 deaths, Britain has one of the highest official death tolls from Covid-19 in the world and Hancock, in the post for almost three years, had been heavily criticised for his initial handling of the pandemic.

However Johnson’s Conservative government has been boosted by a rapid rollout of the vaccine programme, with 84 percent of adults having one dose and 61 percent having both, well ahead of most other countries.

JNV Result 2021: Meanwhile, the provisional select list for class 11 is out, and this list has been released for different regions and students can check their names in the list according to their region.
Read more
Load more