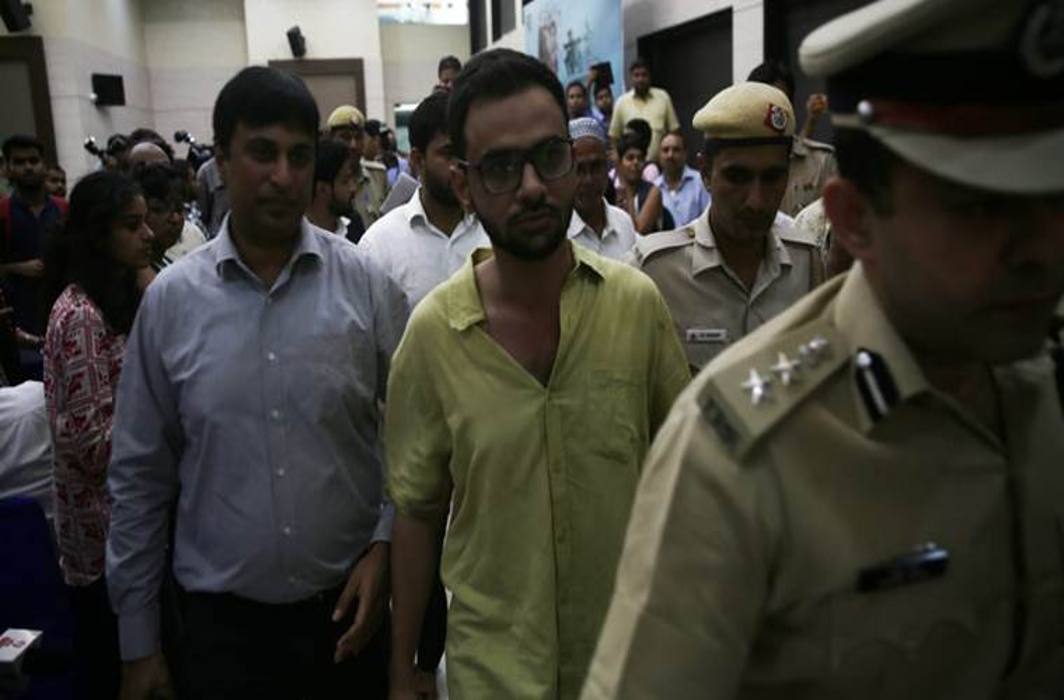 The Delhi Police Special Cell on Thursday, August 16, launched a manhunt to nab two young men who, in a video being circulated on social media including WhatsApp, claimed to have attacked JNU student Umar Khalid.

The two men, one of them holding the Indian flag, said they would surrender at the house of Sikh revolutionary Kartar Singh Sarabha on August 17.

They claimed, “By attacking Khalid we wanted to give a gift to the people on the occasion of Independence Day.”  The two men identified themselves as Sarvesh Shahpur and Naveen Dalal and appealed to the police not to “harass” others for the attack.

The police would take the help of their counterparts in Haryana and Punjab to track down the two men, reported The Indian Express (IE). Police suspect the video was recorded somewhere in Haryana or Punjab.

Khalid was attacked by an armed assailant on Monday, August 13, outside the Constitution Club of India where he had come to attend an event.

The accused had fled from the spot after the attack and he is yet to be identified. The attack and the escape happened two days before Independence Day, dodging police security in the area close to Parliament and offices of several central government ministries.

One of the men seen in the video made the video public on Independence Day through his Facebook profile, with the caption “Deshdrohi Umar Khalid par hamla, zyaada se zyaada share kare (Attack on the traitor Umar Khalid, share as much as possible),” reported The Quint.

Both men, identified as Naveen Dalal and Darvesh Shahpur, refer to themselves as gau rakshaks on Facebook. Gau rakshak bands have been behind many of the mob lynching incidents in the country after the propaganda hype alleging rampant cow slaughter the threat it posed to India and ‘Indian culture’.

The video has been forwarded to the Delhi Police, who are trying to match the photo of the two persons with the attacker seen in the CCTV footage recovered from the spot.

They also say, “We respect the Supreme Court and the Constitution, but we are angry that there is no proper provision in the Constitution to punish these mad dogs, like the JNU gang. Our elders in Haryana have taught us that mad dogs should be done away with, without delay. We, Darvesh Shahpur and Naveen Dalal Mandothi, are responsible for the attack on Umar Khalid in Delhi. This attack was a gift from us this Independence Day. We will surrender to the police on 17 August at 12 noon at patriot Kartar Singh Sarabha’s village, at his home.”

Kartar Singh Sarabha was a Sikh revolutionary who died in 1915. The village of his birthplace, Sarabha, falls in Punjab’s Ludhiana district, at a distance of 328 km from Delhi.

Towards the end of the clip, which is 4 minutes and 31 seconds long, the man on the right of the screen says, “Our message to all our fellow Indians is that we have done this attack not for ourselves, but for the entire nation. We do not care even if we lose our lives for this. We will not let terrorists like Afzal be born in this country.”

They continue, “He (Umar Khalid) had said ‘Bharat tere tukde honge.’ We will not tolerate those who stay in India and try to break India into pieces, those who commemorate the death anniversary of a terrorist by chanting anti-national slogans like ‘Pakistan Zindabad’. We seek the help of all our fellow Indians in this fight that we have started. They should not support such anti-nationals.”

The man on the left of the screen continues, “Umar Khalid says that there is fear in this nation. Look at the number of soldiers at our borders who are getting martyred, so many police personnel are working day and night on the streets. If you are still scared, go to Pakistan. Your fear was supposed to be put to an end, brother.”

The video reveals the extent to which hate propaganda based on falsehoods and manufactured ‘facts’ corrupts people’s minds and turns into a real threat to life of citizens. The colour given to JNU incident and ‘tukde tukde gang’ propaganda was based on videos which forensic probe found to have been manipulated. Voices of persons not present in the clips were inserted into the video clips.