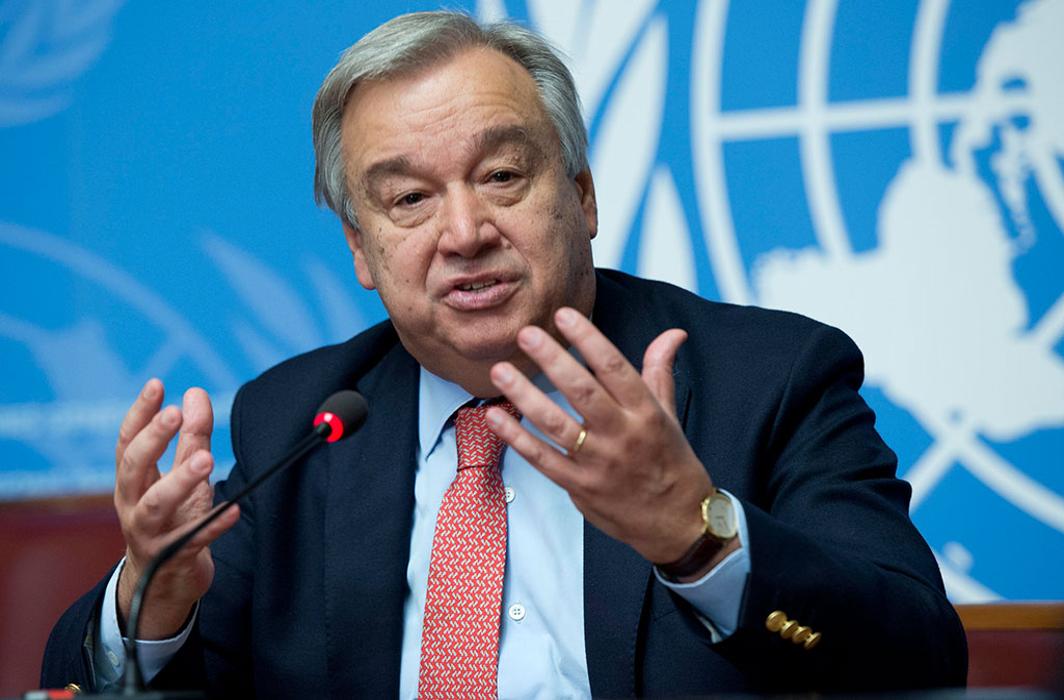 Iran says Israeli claim of shooting down its drone is ridiculous

UN Secretary-General Antonio Guterres has called for an immediate de-escalation in Syria-Israel theatre after reports of Syrian forces shooting down Israeli F-16 warplane and Tel Aviv’s claim of downing Iranian made drone in its territory.

UN spokesman Stephane Dujarric said in a statement on Saturday,“ Guterres is following closely the alarming military escalation throughout Syria and the dangerous spillover across its borders,”

Russian Foreign Ministry has also expressed concern about the latest developments in Syria and called on the sides to exercise restraint and avoid escalation of the situation.

In the meantime, Iran has rejected Israel’s claim of shooting down Iranian made drone in its territory on Saturday as “ridiculous” and clarified that Islamic Republic’s military advisory presence in Syria is at the request “constitutional and legitimate” government in that country.

According to Tehran based Press TV, Bahram Qassemi, the spokesman of Iranian Foreign Ministry said on Saturday, “Claims about the flight of an Iranian drone … are too ridiculous to be addressed because the Islamic Republic of Iran has advisory presence in Syria at the request of the country’s legitimate and constitutional government.”

“The government and army of Syria as an independent country have a legitimate right to defend [the country’s] territorial integrity and counter any type of foreign aggression,” he reportedly said.

The spokesman emphasized that the “illegitimate Israeli regime cannot cover up its atrocities and crimes against Muslim nations in the region by playing a blame game and spreading lies.”

Meanwhile, Ali Akbar Velayati, adviser to country’s supreme leader Ayatollah Ali Khamenei on international affairs, while speaking to the reporters in Tehran on Saturday said that the Syrian government and nation have proved that they would sacrifice themselves to “safeguard their country’s territorial integrity, security and independence.”

He further said that Syrian people have achieved victory in an “international war”, in which more than 80 countries dispatched terrorists to that country.

On the other hand Tel Aviv based Haaretz quoted military sources saying that Israeli army decided to shoot down Iranian drone over its territory in an attempt to prove Tehran was operating in Syria against Israel.

The Israeli army said that Iran’s Islamic Revolutionary Guards Corps (IRGC)’s Quds Force have been active for a long period of time from the T-4 Syrian air force base near to Palmyra. It claims that they are supported by Syrian army with approval of the Assad regime.

While describing the events leading to the crash of Israeli F-16 by Syrian forces, Haaretz said that “In response to the incursion by an Iranian drone, Israeli aircraft stuck Iranian targets in Syria, with a barrage of Syrian air-defense missiles bringing down an Israeli F-16 over Israel. Following the downing of the Israeli fighter jet, Israel said it carried out “large scale strikes” in Syria targeting Syrian air-defense batteries and four Iranian sites.”

Reuters also confirmed the situation which led to downing of Israeli F-16 warplane. A report compiled by its correspondents based in Jerusalem and Beirut said, “Anti-aircraft fire downed an Israeli warplane returning from a bombing raid on Iran-backed positions in Syria Saturday in the most serious confrontations yet between Israel and Iranian-backed forces based across the border.”

The agency, quoting an Israeli official, further reports that “The F-16, one of at least eight Israeli planes dispatched in response to what Israel said was an Iranian drone’s incursion into its airspace earlier in the day, was hit by a Syrian anti-aircraft missile and crashed in northern Israel.

Another Reuters report quoted Hezbollah condemning the Israeli aggression saying that Saturday marked the “start of a new strategic phase”. It also said that exploitation of Syrian airspace will be limited. “Today’s developments mean the old equations have categorically ended.”