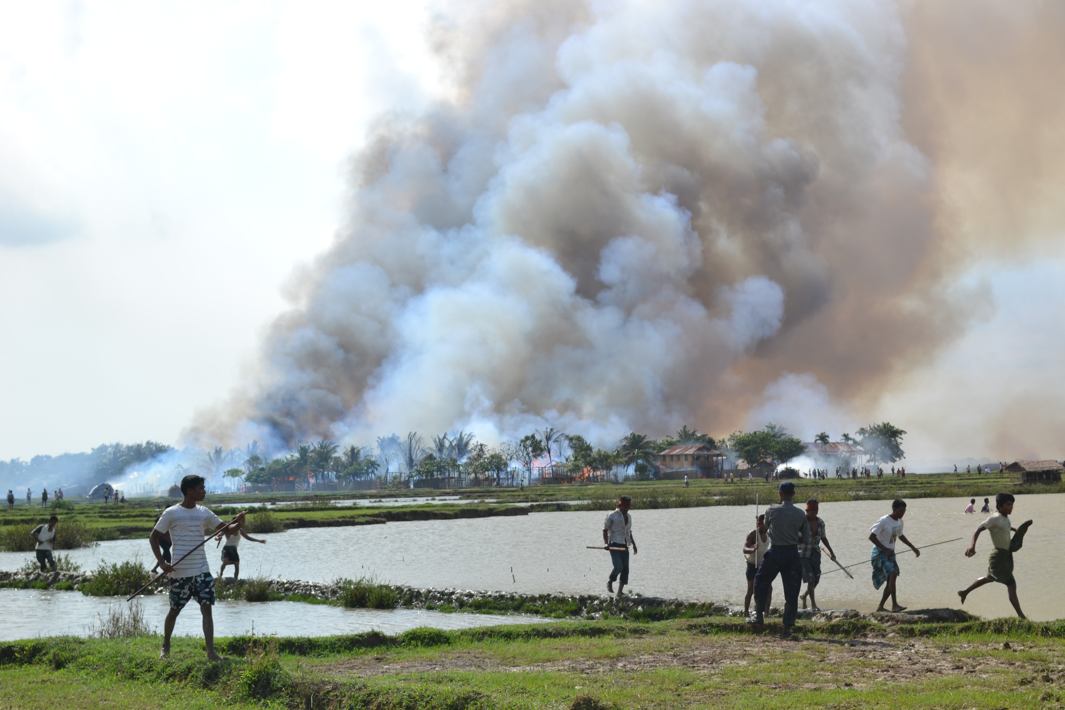 At a time when the global community has been slamming the Myanmar government for alleged state-sponsored violence against lakhs of Rohingya Muslims in the country’s troubled Rakhine state, the Myanmar Army said on Sunday that it had discovered a mass grave of 28 Hindus in the region. The Myanmar Army has blamed the killings on Muslim Rohingya militants associated with the Arakan Rohingya Salvation Army (ARSA).

A report by news agency AFP (Yangon) said that the Army’s announcement “could not be independently verified in a region that has been seized by communal violence since Rohingya militant raids on August 25 triggered a sweeping security crackdown.”

“Security members found and dug up 28 dead bodies of Hindus who were killed by ARSA extremist Bengali terrorists in Rakhine State,” a statement posted on the army chief’s website said. The Army said that security officers found 20 dead women and eight men in the graves, including six boys under the age of 10.

The ARSA is the group whose alleged attacks on Myanmar police’s posts on August 25 had triggered an army backlash so brutal that the UN believes it amounts to ethnic cleansing of the Muslim minority. The Myanmar establishment, including Nobel Peace laureate and State Counsellor Aung San Suu Kyi, has not expressly denied the Army’s atrocities on the Rohingya Muslims. Suu Kyi has in fact been under attack from fellow Nobel laureates, the UN and international human rights groups for her failure to check the persecution of the Rohingyas – world’s most persecuted ethnic minority.

More than 430,000 Rohingya have fled to Bangladesh from the Rakhine State in under a month amid reports of ghastly atrocities, rapes, murders and still worse being perpetrated on member of the ethnic minority by the Myanmar Army.

Some 30,000 Hindus and Buddhists based in the area have also been displaced, with some saying they were terrorised by Rohingya militants.

Myanmar government spokesman Zaw Htay confirmed the discovery of the 28 bodies on Sunday. A senior police officer in northern Rakhine told AFP they had been “buried with 10-15 bodies in each hole.”

The village – Ye Baw Kya – where the Army chief said the bodies were found is near a cluster of Hindu and Muslim communities in northern Rakhine called Kha Maung Seik.

Hindus from the area have told AFP that militants swept into their villages on August 25, attacking people who stood in their way, killing many and taking others away into the forest.

While the Myanmar Army continues to push its version of the story, blaming the violence in Rakhine State and its repercussions – including mass exodus of the minority community to neighbouring countries – on the ARSA, reports from Bangladesh, where a huge number of Rohingya refugees have taken refuge, point towards barbaric excesses – especially against women – perpetrated by the army.

A report by news agency Reuters, on Sunday, said: “Doctors treating some of the 429,000 Rohingya Muslims who have fled to Bangladesh from Myanmar in recent weeks have seen dozens of women with injuries consistent with violent sexual attacks, U.N. clinicians and other health workers said. The medics’ accounts, backed in some cases by medical notes reviewed by Reuters, lend weight to repeated allegations, ranging from molestation to gang rape, levelled by women from the stateless minority group against Myanmar‘s armed forces.”