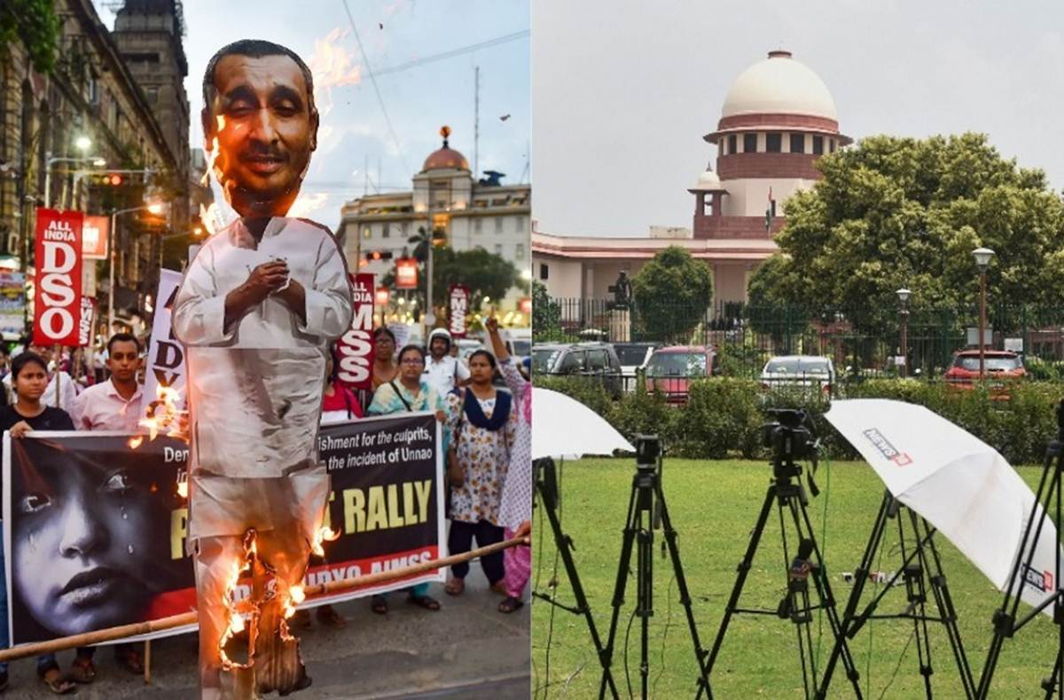 Yogi Adityanath government, with all its boasts about law and order in Uttar Pradesh being a model for the country, got a rap on its knuckles today (Thursday, Aug 1) when the Supreme Court ordered that all cases related to Unnao rape be transferred out of the state to Delhi – from the Lucknow CBI Court to CBI Court in Delhi.

The Bench headed by Chief Justice of India Ranjan Gogoi gave the CBI one week to complete the investigation related to the accident and then file the chargesheet in a fortnight.

The Supreme Court, pronouncing its order in the Unnao rape and accident case, held that the trial court must hear cases on a day-to-day basis and complete the same within 45 days. The top court also held that trial in four cases, which includes 29 July accident and the gangrape case, to be concluded within 45 days with hearings on day to day basis.

The Bench also said the victim and her counsel, who are admitted in Lucknow’s KGMU hospital, can be shifted to Delhi if the family desires.

It also directed the government to provide CRPF protection to her and her family. Concerned Commandant of CRPF will oversee the protection and submit a report in the Supreme Court.

The Bench also gave liberty to the accused to move the Supreme Court directly in case they want to challenge the order, said media reports, since it was given ex parte due to the facts/circumstances of the case.

The victim, who is now battling for life after an accident in Rae Bareli on Sunday, had written to the CJI on July 12 about the threats to her from BJP MLA Kuldeep Singh Sengar, the accused in the rape case. On Sunday, the woman and her lawyer were critically injured and her two aunts were killed after the car they were travelling in was hit by a truck on the highway.

Meanwhile, ahead of the top court’s order on the case, BJP expelled party MLA Kuldeep Singh Sengar, who is accused of raping a woman in Unnao.

Sengar, and nine others, including the son-in-law of a UP minister, have been booked by the CBI on allegations that they orchestrated the accident that has left the woman in a critical condition.

Earlier today, the top court had directed a “responsible” officer from the investigating agency to appear before it at 12 noon. The top court had also refused a plea of the Solicitor General requesting that the matter be adjourned to 10.30 am on Friday, as the officers probing the Unnao cases were out of Delhi. “We would like a responsible officer of CBI to come here with full information,” CJI Gogoi heading a three-Judge bench had told Mehta.

“Tomorrow is another day, Mr. Solicitor. We will see separately what can be done tomorrow. We want this to happen today,” Chief Justice Gogoi responded.

The court suggested that the CBI Director could be briefed by his probe officers telephonically. The CJI refused to postpone the meeting, which he said could even be held in chambers as the details of the rape case investigation may be sensitive in nature and not to be outed at this point.

The deadline given by the top court spurred CBI into action. A team of CBI officers reached King George’s Medical University in Lucknow on Thursday as the Supreme Court asked the central investigating agency to finish the investigation into 29 July accident where the two aunts of the survivor died. One of the aunts (maternal) was cremated on Thursday in Subeha village under heavy police presence.

Another team of CBI officers rushed to Sitapur jail where accused Kuldeep Singh Sengar is lodged. BJP expelled the MLA from the party today.

An enquiry will be conducted by Secretary General, under the supervision of a sitting Supreme Court judge nominated by the CJI, on whether any lapse or negligence by registry officials caused the Unnao victim’s letter to reach the CJI late.

Supreme Court registry had informed CJI Ranjan Gogoi that the delay in dealing with the letter written by the survivor and her family to the CJI was not deliberate. The registry receives more than 5,000 letter petitions a month. Last month, it received 6,800 letter petitions, secretary-general told the Supreme Court on Thursday.

Explaining the delay in delivering letter from the survivor in the Unnao case was not deliberate, the secretary-general told the Supreme Court that letter petitions are screened as per Supreme Court judgment. Registry was in the process of screening when it came to know from reports that the survivor had written to the CJI. The secretary-general of the registry further said that immediately, the letter was traced and placed before Ranjan Gogoi. “The delay was not deliberate,” Secretary-General to Supreme Court.

The Supreme Court then ordered an inquiry to be conducted by the secretary-general within seven days, under supervision of a sitting judge of the apex court, who will be nominated by CJI Ranjan Gogoi, into whether there was any lapse or negligence by registry officials in processing the letter of the Unnao rape victim to Gogoi.