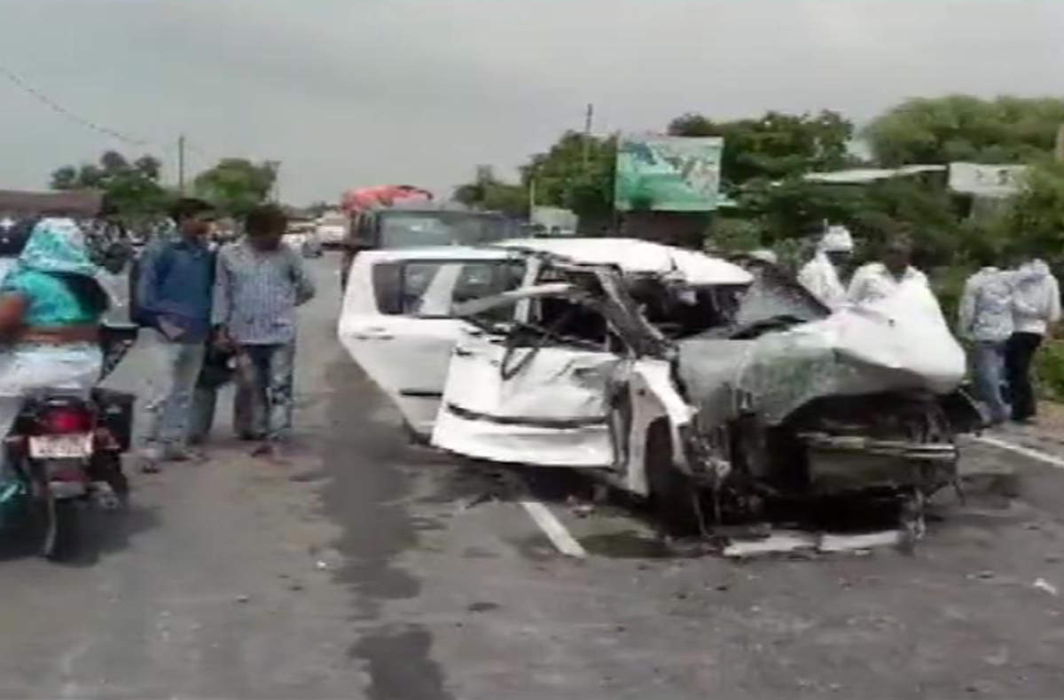 A murder case was filed against BJP legislator Kuldeep Sengar after yesterday’s accident in Raebareli, in which a truck crashed into the car in which a teenager he had allegedly raped was travelling with her lawyer and two aunts, both of whom were killed.

They were returning from Rae Bareli prison after meeting the rape survivor’s uncle, who was jailed in a forgery case.

The accident took place on NH 31 near Ataura police post under Gurubakshganj police station, 15km from Rae Bareli prison. The truck owner, Devendra Singh, and the driver, Ashish Pal, have been arrested.

One of the two aunts killed in the accident was a witness in the rape case against the BJP MLA, Kuldeep Sengar. The girl and the lawyer Mahendra Singh were reported to be critically injured. NDTV reported that doctors at the Lucknow hospital where the teen is admitted, said she has extensive fractures on her ribs, collarbone, an arm and a leg. She is in a critical condition and on ventilator.

The lawyer is battling for life with head injuries and multiple fractures in KGMU Trauma Centre, Lucknow.

The teen’s mother said the accident was meant to eliminate her daughter and that Kuldeep Sengar was plotting against them from jail.

The police had earlier said initial investigations indicate that it was an accident.

The girl was not accompanied by the security personnel assigned to her, and the truck that hit the car had its number plates scrubbed with black paint.

The mother of Unnao rape victim on Monday termed the incident as a conspiracy to “wipe out her family”. “It was not an accident but a conspiracy to eliminate all of us,” she was quoted as saying by PTI.

“The son of a co-accused in the case, Shahi Singh, and another youth of the village had threatened us. They said that they will deal with us,” she added.

Sengar, MLA from Bangarmau in Unnao, is lodged in Sitapur district jail. “MLA Kuldeep Singh and his associates planned the attack to threaten us so that we stop pursuing the case. Everyone in the village knew they were going to Rae Bareli jail,” said the rape victim’s cousin in Unnao.

Uttar Pradesh Director General of Police OP Singh said the state government is ready to transfer the case to the Central Bureau of Investigation (CBI).

Addressing a press conference in Lucknow, the DGP said that the woman was provided with three security guards but they were unable to accompany her as there was no place in the car. Prima facie, Singh said, it appears to be an accident and an “unbiased” probe is on.

“The state government is ready for recommending a CBI probe into the Sunday’s mishap in Raebareli if the victim’s mother or any relative makes any request in this regard,” the officer was quoted as saying by PTI.

The police said they have arrested the truck driver and the owner. The number plates, the owner allegedly said, were defaced to stop identification of the vehicle as he had defaulted on the payments for the vehicle loan.

The teen, the police said, was assigned nine security personnel, including a gunner. The gunner, Suresh, told NDTV that the security personnel were asked to stay back as “there was no space in the car”. “Aunty said there was nothing to worry about since five people were going and that they would be back by evening,” he said, according to NDTV.

The incident created an uproar. In Parliament, the upper house, Rajya Sabha, was adjourned till noon following Opposition protests.

Samajwadi Party chief Akhilesh Yadav alleged that it could be a conspiracy to kill her and demanded a CBI probe into the incident. “This incident has links with a BJP MLA and there is a BJP government in the state. There is ‘jungle raaj’ in the state. The criminals are roaming fearlessly. Only a CBI probe will solve this mystery,” Yadav said on Sunday.

In a series of tweets, Congress’s Priyanka Gandhi targeted the state’s BJP government led by Yogi Adityanath. “So a woman is allegedly raped by a BJP MLA. Her father is beaten up and dies in custody. A key witness dies mysteriously last year. Now her aunt who was also a witness is killed and her lawyer is critically injured in an accident caused by a truck with blackened number plates… The accused continues as a BJP legislator, and the BJP State Government has the audacity to run a ‘Fear-free UP’ campaign???”

So a woman is allegedly raped by a BJP MLA. Her father is beaten up and dies in custody. A key witness dies mysteriously last year. Now her aunt who was also a witness is killed and her lawyer is critically injured in an accident caused by a truck with blackened number plates.

Priyanka Gandhi Vadra said the road accident of the woman was “shocking”. “The road accident involving the Unnao rape victim is shocking. Where has the CBI probe in this case reached?” she asked on Twitter. “Why is the accused MLA still in the BJP? Why is there laxity in the security of the victim and the witnesses?”

Commenting on the incident, Congress leader Rahul Gandhi slammed the BJP’s ‘Beti bachao beti padhao’ slogan, saying it is “a new special education bulletin for Indian women.” “Don’t ask questions if a BJP MLA is accused of having raped you,” he tweeted.

The National Commission for Women expressed concerns over the incident and directed UP DG to ensure fair and speedy investigation into the matter.

Kuldeep Sengar, a four-time legislator who represents Bangermau in the Uttar Pradesh Assembly, has been in prison for a year over the alleged rape, which took place in 2017. The girl alleged that she was sexually assaulted by the lawmaker when she went to his Unnao home to seek a job. Kuldeep Sengar’s brother Atul Sengar has been accused of murdering the girl’s father, who was pursuing the case.

The case made it to national headlines laste year after the girl and her mother attempted to immolate themselves in front of the house of Chief Minister Yogi Adityanath.  The girl’s father, who was arrested and accused of illegal arms possession, died in police custody. Before the arrest, he was beaten up by Atul Sengar and his men. Postmortem report showed extensive injuries.

The government transferred the case to CBI, which lodged three FIRs on April 13, and arrested Sengar and his 10 aides.

On December 27, UP Police registered an FIR against the rape survivor on a complaint filed by the husband of a co-accused, accusing her of framing their son in a kidnapping case. Police registered a case of forgery and cheating against the minor, her mother and uncle Mahesh, who played a key role in the arrest of Bangarmau MLA Kuldeep Singh Sengar last year.

Earlier, a key witness in the case had died in custody. The survivor’s uncle, presently lodged in Rae Bareli jail, had cast doubt about the manner of the witness’s death. But the police claimed that the witness’s family stated that he died due to illness.

The gang-rape survivor’s uncle had said Mohammed Yunus, 32, was the key witness in the attack on the survivor’s father, who later succumbed to his injuries in judicial custody when he was sent to jail by the local police after being implicated in a fake case of possession of illegal firearms.

He had alleged that locals in Yunus’s village had expressed the suspicion that he was eliminated to help the jailed BJP MLA, his brother Atul Singh Sengar and their aides.

He said the Central Bureau of Investigation (CBI) had recorded Yunus’s statement and made him the key witness in the case against the MLA and his aides.