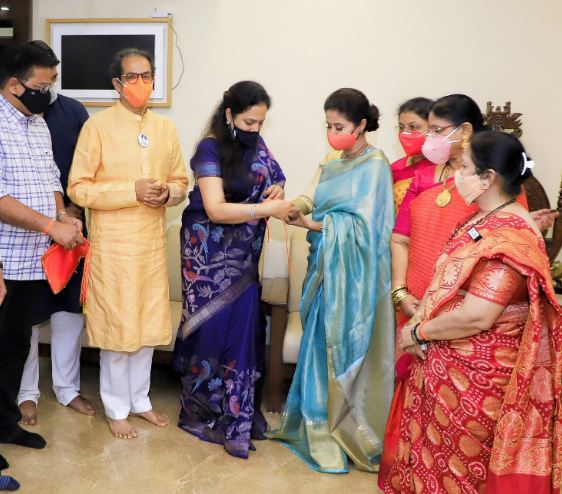 In the presence of Maharashtra Chief Minister Uddhav Thackeray and other party leaders, the actor-turned-politician Urmila Matondkar joined Shiv Sena on Tuesday. The actor is likely to join the state legislative council from the Governor’s quota.

Matondkar’s name is among other 11 names which had been forwarded to Maharashtra Governor B S Koshyari for nomination to the Legislative Council from the Governor’s quota as reported by news agency PTI. The list of 12 names, however, is yet to be approved by Koshyari.

Earlier, Shiv Sena leader Sanjay Raut said Matondar’s joining will strengthen the party’s ‘mahila aghadi’. Calling her Shiv Sainik, Raut on Tuesday informed about her formal entry at residence Matoshree in the presence of Thackeray and his son and minister Aaditya Thackeray.

The senior party leaders have said that the leadership was impressed with the way Matondkar tackled actor Kangana Ranaut when the latter compared Mumbai with Pakistan-occupied Kashmir, and criticised the Uddhav Thackeray government.

Being a well-known face nationally, Matondkar has a good social connect within Maharashtra. Hence, she can turn out to be an additional voice for the Shiv Sena to put out its messages on national level, told the party insiders.

The 46-year-old actor had last year contested from the Mumbai North Lok Sabha constituency on a Congress ticket. Later, she quit the party, a key ally of the Shiv Sena-led Maha Vikas Aghadi (MVA) government, citing inaction on the part of key functionaries of Mumbai Congress as the reason for her resignation.

Matondkar had an unsuccessful contest against Gopal Shetty of the BJP, who won by almost 4 lakh votes in the 2019 Lok Sabha elections. Later, in September, she had resigned saying that her efforts to work for the betterment of the party did not find support. Further she had said that her political and social sensibilities refused to allow vested interests in the party to use her as a means to fight petty in-house politics,  instead of working on a bigger goal in Mumbai Congress.