Acting Chief Yogananda Pittman told reporters that Capitol Police shot dead the driver after he jumped out of the car and lunged at them with a knife. 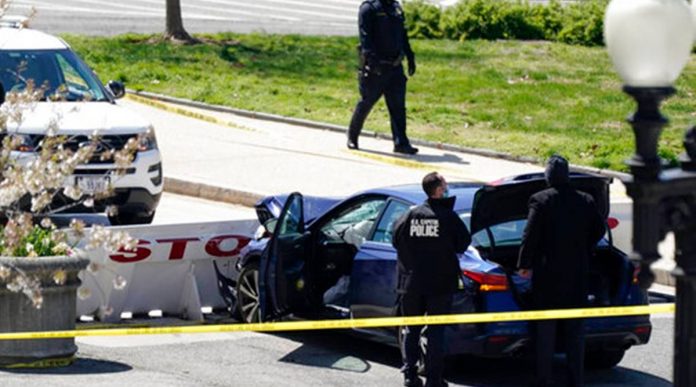 The US Capitol witnessed a deadly attack on Friday when a vehicle rammed through security and crashed into a barrier at the Washington complex killing one security official and injuring the other. The US Capitol has been put on lockdown in less than three months after a mob assault on Congress on January 6.

Acting Chief Yogananda Pittman told reporters the Capitol Police shot dead the driver after he jumped out of the car and lunged at them with a knife.

US President Joe Biden, who was with First Lady Jill Biden at Camp David for the Easter holiday, offered his heartfelt condolences to the family of deceased William Evans who was the veteran policeman killed in the attack.

Biden said in a statement that Jill and he was heartbroken to learn of the violent attack at a security checkpoint on the US Capitol grounds.

US media said police officials had identified the attacker as Noah Green, a 25-year-old black man from Indiana and an adherent of the black nationalist Nation of Islam movement.

Washington Metropolitan Police Chief Robert Contee said the attack does not appear to be terrorism-related, but obviously, we will continue to investigate

Some of Green’s online posts in March suggested a level that he was depressed as he had posted that he was unemployed and had health problems, and made references to biblical concepts of the end of times. He wrote that he had faced unimaginable tests and was now in search of a spiritual journey.

In one of his posts, he spoke of being tormented by the investigation agencies FBI and CIA, hospitalized, and subjected to mind control. He had also called the government the number enemy of Black people. It was also said that he was a follower of Louis Farrakhan, the leader of the Nation of Islam, who promotes black people and anti-Semitic thinking.