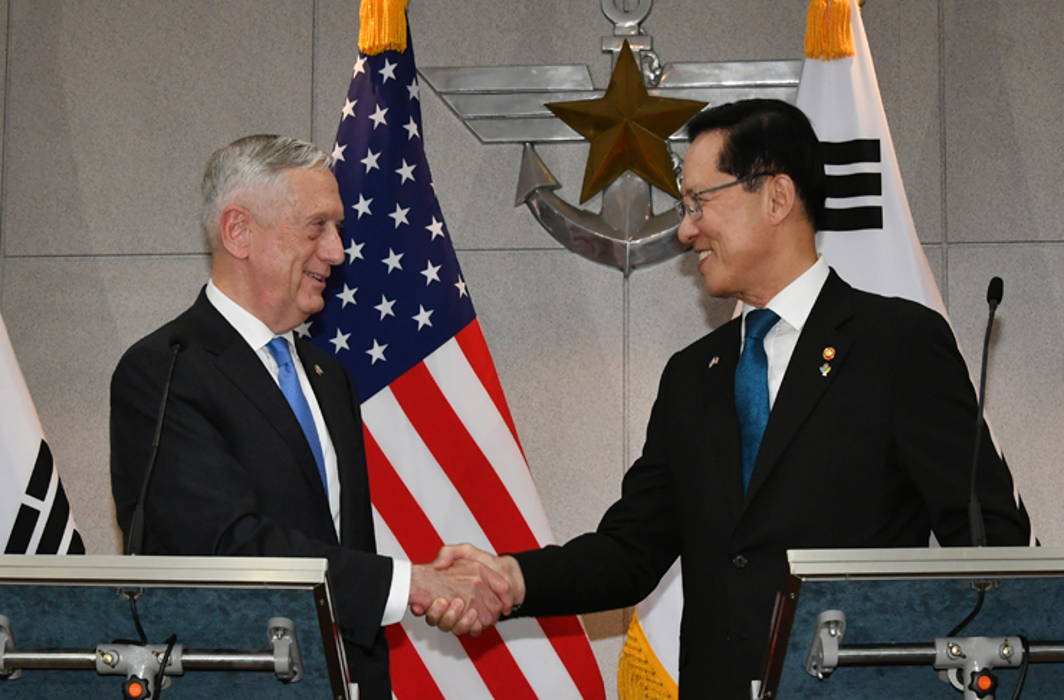 Amidst contradictory statements from US President Donald Trump after his meeting with North Korean leader Kim Jong-un on June 12 in Singapore, top defence leadership of US and South Korea have pledged to tighten security readiness in a peaceful manner for complete denuclearization of the Korean Peninsula.

According to Korea Times, US defence Secretary James Mattis and South Korea’s Minister of National Defence Song Young-moo met in Seoul on Thursday. This was the third meeting between to defence officials of South Korea and US.
South Korean Minister of National Defence said in opening remarks during talks with his U.S. counterpart James Mattis, “If North Korea continues to take action to realize its pledge for denuclearization, Seoul and Washington will come up with measures to show peace and trust to Pyongyang.”

He also said Washington has no plans to downsize the U.S. Forces Korea (USFK), at least for the time being.

The meeting between the two top defence leaders comes at a time when inter-Korean relations are showing signs of a rapid thaw, with North Korean leader Kim Jong-un pledging to scrap his nuclear arsenal.

Earlier this month, South Korea and US had decided to suspend the large-scale Ulchi Freedom Guardian (UFG) joint military exercise scheduled for autumn in response to Kim’s rare peace gestures.

US Secretary of State further said, “We are reinforced by shared democratic values and by common security interests. The U.S. commitment to South Korea remains ironclad and the U.S. will continue to use a full range of diplomatic and military capabilities to uphold this commitment. This includes maintaining the current U.S. forces levels on the peninsula.”

Despite the latest peace momentum on the peninsula, Song and Mattis also pledged to enhance the Seoul-Washington alliance by communicating closely with each other.

Earlier on Tuesday, Pyongyong has decided to skip its annual anti-US imperialism rally this year, which is considered to be the strongest sign that Kim Jong-un’s government is toning down its rhetoric in a bid for peace and progress. The rally was supposed to be held on Wednesday, July 27, a national holiday celebrated as the day of “Victory in the Fatherland Liberation War.”