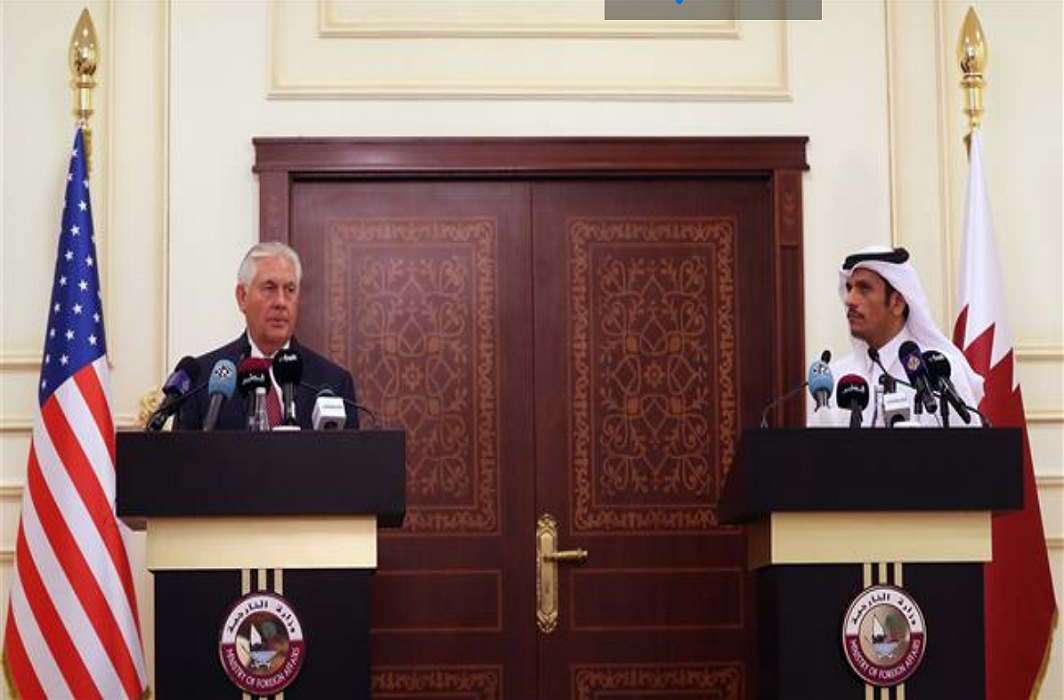 The US mediation efforts have failed to convince Saudi rulers to begin direct talks for resolving Qatar crisis. This was clearly indicated by Secretary of State Rex Tillerson on Sunday while addressing a joint press conference with his Qatari counterpart Sheikh Mohammed bin Abdulrahman Al Thani in Doha.

After spending a day in Riyadh, Tillerson said, “We cannot force talks upon people who are not ready to talk.” He further said, “In my meetings with [Saudi] Crown Prince Mohammed bin Salman, I asked him to please engage in dialogue, [but] there is not a strong indication that parties are ready to talk yet.”

This was Tillerson’s second visit to the region as part of US diplomacy for resolving the Qatar crisis. He said that he is not hopeful that Saudi Arabia is willing to enter discussion to resolve the crisis.

Tillerson who also met Qatari emir Sheikh Tamim bin Hamad Al-Thani expressed concern about the effect of the crisis on the regional security.

“It’s very important for the GCC to continue to pursue unity. It is most effective when it is unified and none of us can afford to let this dispute linger. We ask that everyone minimises the rhetoric and de-escalate the tensions and take steps to do so,” Tillerson said.

Earlier on Thursday Tillerson told Bloomberg, “There seems to be a real unwillingness on the part of some of the parties to want to engage… It’s up to the leadership of the quartet when they want to engage with Qatar because Qatar has been very clear – they’re ready to engage.”

However, Qatar’s foreign minister Sheikh Mohammed bin Abdulrahman Al Thani reaffirmed commitment to dialogue and emphasised the need for the crisis to be resolved. He said that Saudi led group was not ready “to tackle with dialogue the reasons for this crisis.”

He expressed frustration over the behaviour of the four blockading countries. He said, “These countries have resorted to undiplomatic tactics that have nothing to do with modern diplomatic lessons, and this is no good.”

He was equally concerned about the unity among Gulf Cooperation Council (GCC). “The GCC is quite important for the collective security and we feel sorry that the GCC will be the victim of the crisis against the state of Qatar,” he said.

He was also of the view that the lingering crisis has affected the collective security of the GCC member states.

Saudi Arabia, UAE, Egypt and Bahrain had suddenly cut diplomatic ties with Qatar on June 5 and imposed land, air and sea blockade. Saudi Arabia appealed “all brotherly countries” to sever ties with Doha. Kuwait and Oman did not follow Riyadh.

Saudi Arabia has accused Doha of financing “terrorism” and maintaining close ties with its regional rival Iran. However, Qatar denies the allegations.

After the crisis began, Iran has started supplying daily needs to the tiny oil rich country. Tehran also allowed Qatar Airways to use its air space for reaching Central Asia and European countries.

Meanwhile, Lieutenant General Jeffrey Harrigian of US Air Force Central Command, has on Sunday said, “There are no diplomatic issues that are impacting our ability to operate every day from here in our counter-ISIS missions”. Their Command Control headquarters is located just outside Doha at Al-Udeid airbase.

While in Riyadh, Tillerson also participated in the inaugural meeting of the Saudi Arabia-Iraq Coordination Committee, along with Saudi King Salman and Iraqi PM Haider al-Abadi. Iraq and Saudi Arabia have long been regional rivals.

This is again considered to be aimed to minimise widening Iranian influence in the region. In post 2003 era, Iran and Iraq have emerged to be the best friends.

Iranian military advisors have played important role in Baghdad’s fight against Daesh (IS). Baghdad has, time and again, expressed suspicion on US intentions while fighting IS as US jets were caught on camera throwing arms for the IS terrorist in Iraq.