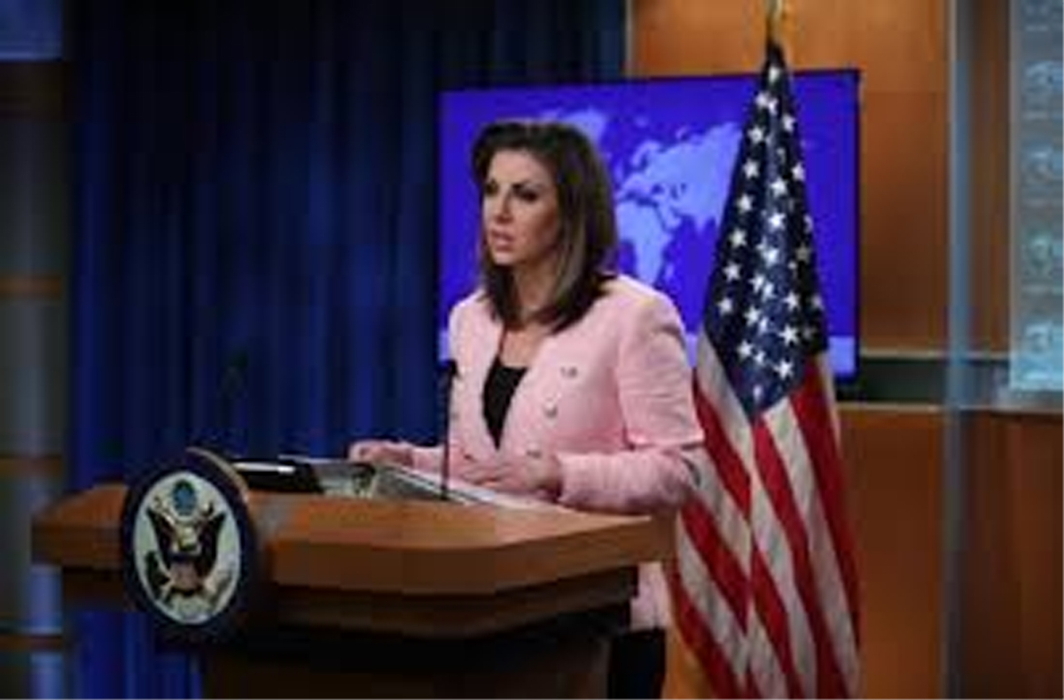 While India’s move to revoke Jammu and Kashmir’s special status evoked sharp reaction in Pakistan which insists on its hackneyed approach of treating Kashmir as the ‘unfinished agenda of Partition’, the international community has been more cautious and, on the whole, tilted towards India.

The United States, where some senators and other groups had been somewhat critical of India’s move, today (Friday, Aug 9) said that there is no change in its policy on Kashmir and called on India and Pakistan to maintain calm and restraint.

Asked by reporters if there has been any change in America’s policy on Kashmir, State department spokesperson Morgan Ortagus replied, “No.” To a followup question, he said, “And if there was, I certainly wouldn’t be announcing it here, but no, there’s not.”

The US policy has been that Kashmir is a bilateral issue between India and Pakistan and it is up to the two countries to decide on the pace and scope of the talks on the issue.

Ortagus said the United States supports dialogue between India and Pakistan over Kashmir. “It’s something that we’ve called for calm and restraint by all parties. We want to main peace and stability, and we, of course, support direct dialogue between India and Pakistan on Kashmir and other issues of concern,” the US state department spokesperson said.

India had, in a sudden move on Monday, Aug 5, revoked provisions of Article 370 to take away J&K’s special status and bifurcated the state into two union territories — Jammu and Kashmir, and Ladakh.

Ortagus said the US was working closely with the two South Asian countries. “We have a lot of engagement with India and Pakistan. Obviously, we just had Prime Minister Khan here, not just because of Kashmir. That’s certainly an incredibly important issue and something that we follow closely. But we have a host of issues that we work with India on quite closely and that we work with Pakistan on quite closely,” she said.

Responding to a question on Pakistan Prime Minister Imran Khan’s allegations of human rights violations in Kashmir, Ortagus said, “I really don’t want to go beyond what we’ve said, because it’s such a tenuous issue. It’s something that we’re talking to them about quite closely.”

“The United States, whenever it comes to any region in the world where there are tensions, asks for people to observe the rule of law, respect for human rights, respect for international norms. We ask people to maintain peace and security and direct dialogue,” she said.

“There are reports, as you’ve mentioned, of detentions and restrictions of residents in Jammu and in Kashmir. And again, that’s why we continue to monitor this very, very closely,” she said.

Ortagus reiterated earlier statements that the US was not consulted and informed by India about its decision on scrapping articles 370 and 35A of the Indian Constitution.

Meanwhile, after Acting Secretary of State for South and Central Asia Alice Wells, another senior US diplomat is heading to India. The visit was pre-scheduled but it would be used to discuss the current issues, Ortagus said.

“Deputy Secretary of State John J Sullivan will travel to Thimphu, Bhutan, and New Delhi, August 11 through 17th to advance the United States partnership with two nations that are critical to preserving the rules-based order in the Indo-Pacific region,” the US State Department spokesperson said.

She said Sullivan will be in New Delhi to advance the broad and multifaceted US-India Strategic Partnership, which is based on a shared commitment to democratic values, economic growth and rule of law.

“There, the deputy secretary will meet Minister of External Affairs S Jaishankar and address the India-US Forum,” Ortagus said.

After India’s move on Aug 5, Pakistan had termed the Indian action as “unilateral and illegal”, and said it will take the matter to the UN Security Council.

“The Secretary-General has been following the situation in Jammu and Kashmir with concern and makes an appeal for maximum restraint,” Guterres’ spokesman Stephane Dujarric said.

Despite Pakistan’s envoy Maleeha Lodhi’s pleas seeking intervention by the UN, Stephane Dujarric said that the Secretary-General “also recalls the 1972 Agreement on bilateral relations between India and Pakistan, also known as the Shimla Agreement, which states that the final status of Jammu and Kashmir is to be settled by peaceful means” in accordance with the Charter of the United Nations.

While rejecting Pakistan’s proposal for and intervention, Guterres was “concerned over reports of restrictions on Indian-side of Kashmir,” and warned that such actions could “exacerbate the human rights situation in region.”

He said there had been contacts from the UN Secretariat both with the Indian and Pakistani authorities and with the Permanent Missions of India and Pakistan.

He said there is no plan for the Secretary-General to brief the Security Council on Kashmir.

“We’ve expressed some of our concerns around the situation and called for calm, but also had a clear readout of the situation from the perspective of the Indian government,” Raab said.

Hua said China had always opposed the Indian side’s “entry of Chinese territory in the western section” of the Sino-Indian border into the administrative jurisdiction of India.

“This position is firm and consistent and has never changed. Recently, the Indian side has continued to damage China’s territorial sovereignty by unilaterally modifying the form of domestic law. This practice is unacceptable and will not have any effect,” she said.

She urged India “to be cautious in its words and actions on the boundary issue, strictly abide by the relevant agreements reached between the two sides and avoid any move that further complicates the boundary issue”.

Hua also said China was “seriously concerned” about the current situation in Kashmir. “The parties concerned should exercise restraint and act with caution, especially to avoid actions that unilaterally change the status quo and exacerbate the tension,” she added.

In a setback to Pakistan, the United Arab Emirates has backed the decision to reorganize J&K with UAE’s ambassador Ahmad Al Banna quoted as saying that he hoped India’s move would help improve social and economic conditions in the state.

A report in Gulf News said, “He (Al Banna) commented that from his understanding, the reorganisation of states is not a unique incident in the history of independent India and that it was mainly aimed at reducing regional disparity and improving efficiency. He viewed this latest decision related to the state of J&K as an internal matter as stipulated by the Indian Constitution.”

Sri Lankan PM Ranil Wickremesinghe said making Ladakh a union territory was an internal matter of India. “The creation of Ladakh and the consequential restructuring are India’s internal matters,” he said on social media.

The Lanka PM, however, faced some criticism for saying that Ladakh was turning into another state and that it had a Buddhist majority. The Ladakh region, including Kargil, in fact has more Muslims, mostly Shia, than Buddhists.

“I understand Ladakh will finally become an Indian state. Buddhists are 70% of Ladakh’s population and it will be the first Indian state with Buddhist majority,” he had said.

Backing India’s move, the Maldives government said, “The Maldives considers the decision taken by the Government of India regarding Article 370 of the Indian Constitution as an internal matter.”

“We believe that it is the right of every sovereign nation to amend their laws as required,” it said in a statement.

Neighbouring Bangladesh echoed the view. Speaking at a function in Dhaka, the country’s road transport and bridges minister and the ruling Awami League general secretary Obaidul Qader said that Bangladesh does not make comments on a neighbour’s internal issues.

Following a briefing by Pak PM Imran Khan, a statement from Mahathir’s office said: “Prime Minister Imran Khan among others, referred to the need to respect the relevant UN Security Council resolutions related to Jammu and Kashmir.”

“Malaysia would like to encourage all stakeholders to abide by the relevant USNC resolutions on Jammu and Kashmir towards the maintenance of international peace and security. As a close partner to both India and Pakistan, Malaysia places high hope that the two neighbours will exercise utmost restraint to prevent further escalation that could be detrimental to the peace, stability and prosperity in the region,” the statement said.