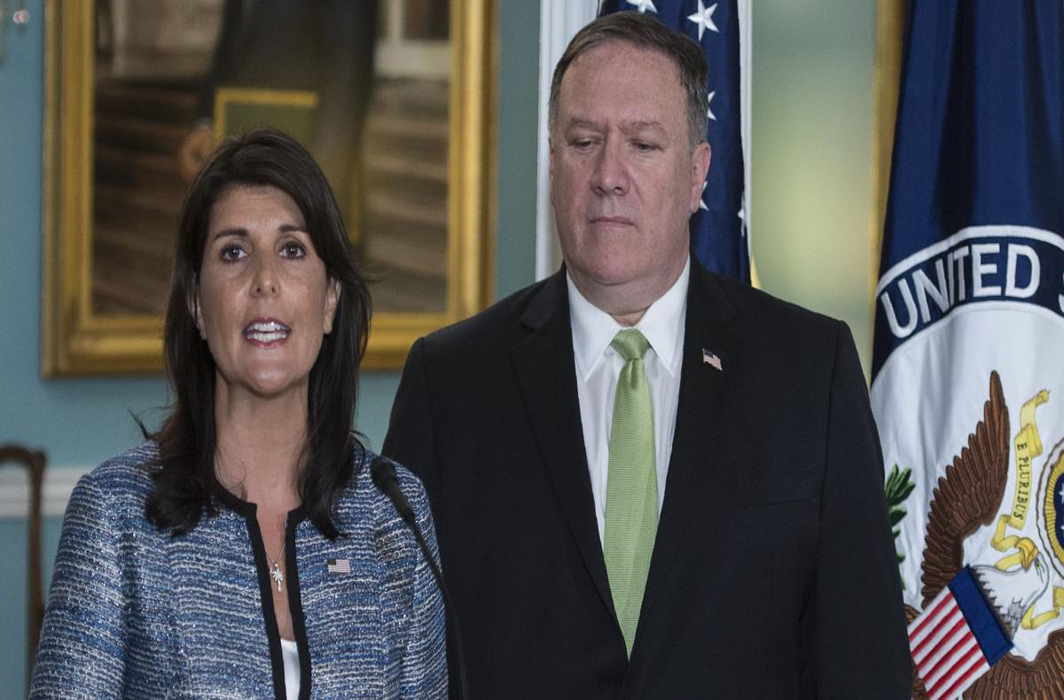 Continuing isolationist moves the US administration has withdrawn from the Geneva based United Nations’ Human Rights Council accusing it of being a “chronic bias against Israel”. Washington’s move triggered criticism by human rights groups while several world leaders described it regrettable.

Nikki Haley, US ambassador to UN announced the decision to pull out of the UN Human Rights Council on Tuesday. She said, “We take this step because our commitment does not allow us to remain a part of a hypocritical and self-serving organisation that makes a mockery of human rights.” US Secretary of State Mike Pompeo was standing beside her during the announcement.

Haley criticised Russia, China and Egypt for thwarting US efforts to reform the council. She did not spare even the countries which shared US values and encouraged Washington to remain but “were unwilling to seriously challenge the status quo.”

“Look at the council membership, and you see an appalling disrespect for the most basic rights,” she said Haley, citing Venezuela, China, Cuba and the Democratic Republic of Congo.

She also said the “disproportionate focus and unending hostility toward Israel is clear proof that the council is motivated by political bias, not by human rights.”

Reacting to the US decision, Zeid Ra’ad al-Hussein, the UN high commissioner for human rights, called it “disappointing, if not really surprising”.  He further said , “Given the state of human rights in today’s world, the US should be stepping up, not stepping back.”

The European Union said the move “risks undermining the role of the US as a champion and supporter of democracy on the world stage”, while British Foreign Secretary Boris Johnson called it “regrettable”.

It was appreciated by Israel, a major ally of the US, calling it a “courageous” move. The UN Human Rights Council voted last month to probe the killing of scores of Palestinian protesters in the Gaza Strip accusing Israel of excessive use of force.

The US exit from the 47-member Geneva-based body did not come as a shock, as Haley had talked about it almost from the moment she became the US ambassador to the UN in early 2017.

Commenting on the US Ambassador Nikki Haley’s announcement, Aljazeera’s Washington based reporter Rosiland Jordan said, “She was quite adamant at the time that the council held a very deep anti-Israel bias and that the US was going to try to root it out; otherwise it would leave the council.”

“But the primary reason why the US is pulling out of the council now is because of its efforts to reduce or eliminate of the unfair criticism, in the US’ view, of Israel’s treatment of Palestinians,” she added.

In their remarks, both Haley and Pompeo said the decision had been made after a long year of efforts to shame the council into reform.

On Monday, UNHRC’s chief Zeid Ra’ad al-Hussein called on Washington to halt its child separation policy from their immigrant parents at the US-Mexico border. He said, “The thought that any state would seek to deter parents by inflicting such abuse on children is unconscionable.”

US President Donald Trump administration move of withdrawing from UNHRC is the latest US rejection of multilateral engagement after it pulled out of the Paris climate agreement and the Iran nuclear deal.

The US move has attracted criticism from a wide range of organisations at home and abroad.  Jamil Dakwar, director of the American Civil Liberties Union’s Human Rights Program, said Trump’s “misguided policy of isolationism only harms American interests.”

Human Rights First, Save the Children and CARE, had earlier warned Secretary of State Mike Pompeo that the US withdrawal would “make it more difficult to advance human rights priorities and aid victims of abuse around the world.”

The US’ move is unprecedented in the 12-year history of the council because no country has ever dropped out voluntarily. Libya’s membership was suspended in 2011 after Tripoli’s crackdown on protesters.

The council’s 47 members are elected by the UN’s General Assembly for a three-year period, and can only serve for two terms in a row. A specific number of seats are allocated for each region of the globe.

Washington is halfway through a three year term and Trump administration had long threatened to quit if it was not overhauled. Under President Barack Obama the US was elected to the UN human rights top body for the maximum two consecutive terms. After a year off, it was re-elected in 2016.