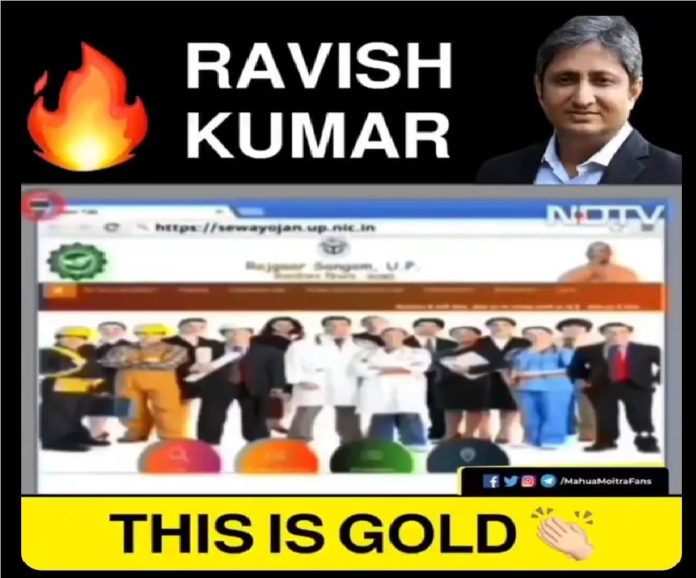 Memes, trolls and viral videos are coming up to be the number one source of entertainment for the social media generation. Be it civilians doing bizarre activities, celebrities acting dumb on Twitter or clips of journalists asking questions, everything is meme-worthy. Today, the subject of trolls is none other than famous Indian journalist, Ravish Kumar.

Recently, a video of Ravish Kumar trolling the Uttar Pradesh Government has surfaced. In the edit, he is standing for the Naujawaan’s of UP has been taking rounds on social media. The video also features the beloved Mithun Da.

In an old clip, Ravish Kumar was satirically questioning the pictures uploaded on the main page of the official website of Rojgaar Sangam UP. The pictures, taken from Google, feature a few foreigners posing as the youth. Kumar asks who these people are and why are they on the website if they are not from Jaunpur or Baliya. He mockingly asks few other questions, like, is it because the unemployed youth from Uttar Pradesh cannot strike such smiling poses for the pictures, that they have not been features in the pictures? Why are the foreign students smiling in the pictures in the first place? Is it because they got employed in Uttar Pradesh? He also compares the beauty and looks of the unemployed youth in Uttar Pradesh with the foreigners. He further urges the Chief Minister of Uttar Pradesh to remove the foreigners from the picture, and replace them with the unemployed people in his state. Kumar’s voiceover also says that if Uttar Pradesh’s youth cannot get air employment opportunities, they should at least get a fair opportunity to be real-life models for the website. After the outburst of these questions, a small clip of Mithun Chakraborty has been edited. In the edited clip, Mithun Da’s reply to Kumar’s last question ‘do you get my point?’ is extremely funny, as he says that he does not understand his point at all.

Earlier, Yashraj shared a video of Rakhi Sawant in which she was grieving about her water bottle and was cursing the one who dunked her water bottle in the swimming pool. The video also went viral and crossed a million views on Instagram.
Read more
Latest india news

Twitter trends and active trolls are a match made in heaven. The memes tend to go even more viral, if a famous person is involved. Today, the subject is Prime Minister Narendra Modi for his Beti Bachao Beti Patao gaffe.
Read more
Bollywood news

Pune (Maharashtra) , January 20: NEURIA, a free mobile application developed by Innoplexus A.G., helping millions of people all over the world with their...
Read more

Onboards over 30 digital influencers to its portfolio Set to achieve a growth of over 200% in 2022 Plans to onboard over 50 influencers in the...
Read more

Pune (Maharashtra) , January 20: NEURIA, a free mobile application developed by Innoplexus A.G., helping millions of people all over the world with their...
Read more

Onboards over 30 digital influencers to its portfolio Set to achieve a growth of over 200% in 2022 Plans to onboard over 50 influencers in the...
Read more