Amid fears of a third wave of the pandemic, the Supreme court had said it could not allow the Uttar Pradesh government to hold 100% physical Kanwar yatra. 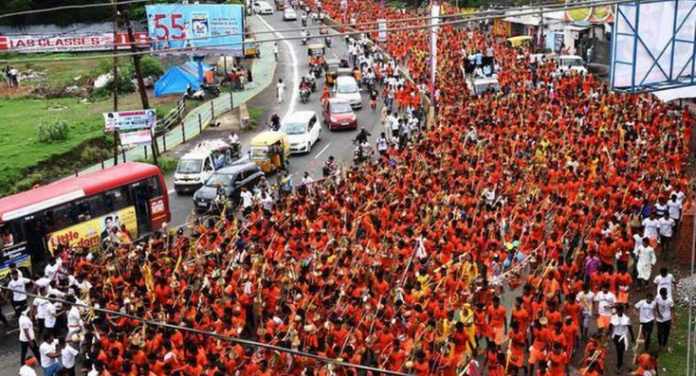 The Uttar Pradesh government has cancelled the Kanwar Yatra citing a decision by groups representing the pilgrims on Saturday.

The announcement came a day after the Supreme Court gave the Yogi Adityanath government time till next week to reconsider its decision to go ahead with the religious event amid the Covid-19 risks.

The Apex Court had taken suo motu cognizance of the state’s move to go ahead with the annual pilgrimage over Covid-19 risks. The court had said that it was giving one more opportunity to reconsider or else it would pass orders.

Amid fears of a third wave of the pandemic, the court had said it could not allow the Uttar Pradesh government to hold 100% physical Kanwar yatra. It stressed that sentiments, including religious ones, are subservient to the right to life.

Earlier, the State government was going ahead with a pared-down symbolic version of the Kanwar Yatra, however, now on appeal of the authority, the Kanwar Sanghs have called off the pilgrimage, said Navneet Sehgal, UP additional chief secretary information. Months after the deadly second wave, the looming threat of a Covid third wave has led the organisers to reconsider their decision to hold the religious event.

Meanwhile, Chief Minister Yogi Adityanath had even convened a meeting for the preparation and security arrangements for the yatra. He had even directed officials to make all preparations in time, ensuring that the Covid protocol was fully followed in these yatras, which was scheduled to start on July 25.

Every year, around 30 million Kanwariyas from northern states walk or drive down in groups to collect water from the Ganga in Uttarakhand’s Haridwar and take it to offer at temples of Lord Shiva back home. Owing to the pandemic, last year too, the yatra was cancelled.