The pre-wedding festivities included haldi ceremony, mehendi ceremony and sangeet ceremony, which was followed by the wedding held on January 24 at The Mansion House in Alibaug. 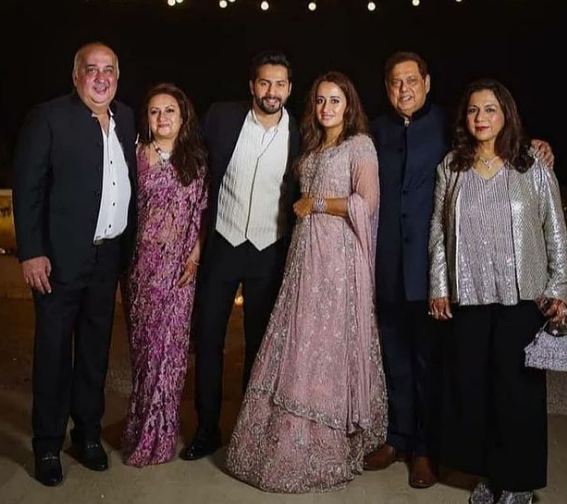 The wedding festivities of Varun Dhawan and Natasha Dalal are over, but the excitement  around it is still high. As the couple kept a strict no-phone policy, the pictures from the wedding were hard to come. Though Varun himself shared the first pictures from his wedding, the fans could not stop digging out more inside photos from their grand wedding.

The social media has been flooded with many unseen pictures from the wedding, which have been shared by wedding guests and fan clubs.

Most recently, few photos from the couple’s cocktail-sangeet party have been doing rounds on the internet. In the pictures, Varun and Natasha can be seen posing with their families.

Varun sported a tuxedo, while Natasha complimented him in a pale pink lehenga. Varun’s father David Dhawan and mother Laali Dhawan joined the frame with Natasha’s Father Rajesh Dalal and mom Gauri Dalal.There were many other photos from the ceremony where the couple were surrounded by their close families and friends.

Fashion designer Manish Malhotra, who was one of the guests in the wedding has also been sharing pictures from the wedding festivities.Recently, he posted a bunch of pictures in the form of video, where he can be seen posing with Varun, his parents David and Laali in one frame.He captioned the video as, #wedding #memorable #moments #family #love.

Few days back, he had also shared another video collage of one of the pre-wedding functions. He captioned it as, Now that’s what I call an absolute fun wedding #familytime #funtimes #moments #memories #love #familyselfies. In the pictures, both Varun and Natasha were featured surrounded by family members.

The pre-wedding festivities included haldi ceremony, mehendi ceremony and sangeet ceremony, which was followed by the wedding held on January 24 at The Mansion House in Alibaug.

The wedding was a low-key affair as the close friends and families were only in attendance. Among the Bollywood celebrities, filmmakers Karan Johar, Kunal Kohli, Shashank Khaitan and fashion designer Manish Malhotra were present.

Reportedly, the newly wed couple Varun and Natasha will host a wedding reception in Mumbai sometime in February.