Varun and Natasha’s families are expected to reach the venue today to officially get the celebrations started. The pre-wedding festivities will begin with a Sangeet ceremony and will be followed up with the wedding on Sunday. 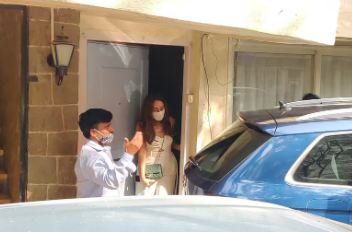 Bollywood actor Varun Dhawan is all set to tie knot with his long time girlfriend and fashion designer Natasha Dalal in an intimate wedding at The Mansion House in Alibaug on January 24.

Ahead of the wedding preparation, the bride Natasha was spotted outside her house leaving for the wedding venue in Alibaug. The camera also caught the glimpse of her bridal trousseau, which were being transported from their Mumbai residence to Alibaug.

The guest lists have been restricted to a select close friends and family, keeping the Covid-19 protocols in mind. From Salman Khan to Shah Rukh Khan, many Bollywood biggies are expected to be in attendance for the wedding. Alia Bhatt, Katrina Kaif, Ranbir Kapoor, Karan Johar, Jacqueline Fernandez among others have been sent the wedding invites.

Varun and Natasha’s families are expected to reach the venue today to officially get the celebrations started. The pre-wedding festivities will begin with a Sangeet ceremony and will be followed up with the wedding on Sunday.

While the couple kept mum about their marriage plans, Varun’s uncle Anil had confirmed that they will tie the knot on Sunday to a publication, SpotboyE. Soon after, their family members started sending e-invites to the selected guests. According to the sources, around 50 guests will attend the wedding, and all of them have been informed that the nuptial will take place at the resort with all Covid-19 safety precautions.

Varun and Natasha were childhood sweethearts and have been dating for years now. The love blossomed between the two years after school when they met at a music concert. They kept their relationships hidden for long periods of time, since Natasha did not want to come in the public eye.

Recently, on Kareena Kapoor’s radio show What Women Want, Varun had talked about her lady love. He said for the first time he met Natasha in the sixth standard. They were very close friends till eleventh or twelfth grade, he had said.

It was on Karan Johar’s Koffee With Karan, when Varun Dhawan opened up publicly about his relationship with Natasha. He had said they are serious and soon going to get married.The rumours of their wedding kept making headlines since then. And now finally, the two are soon going to become man and wife.