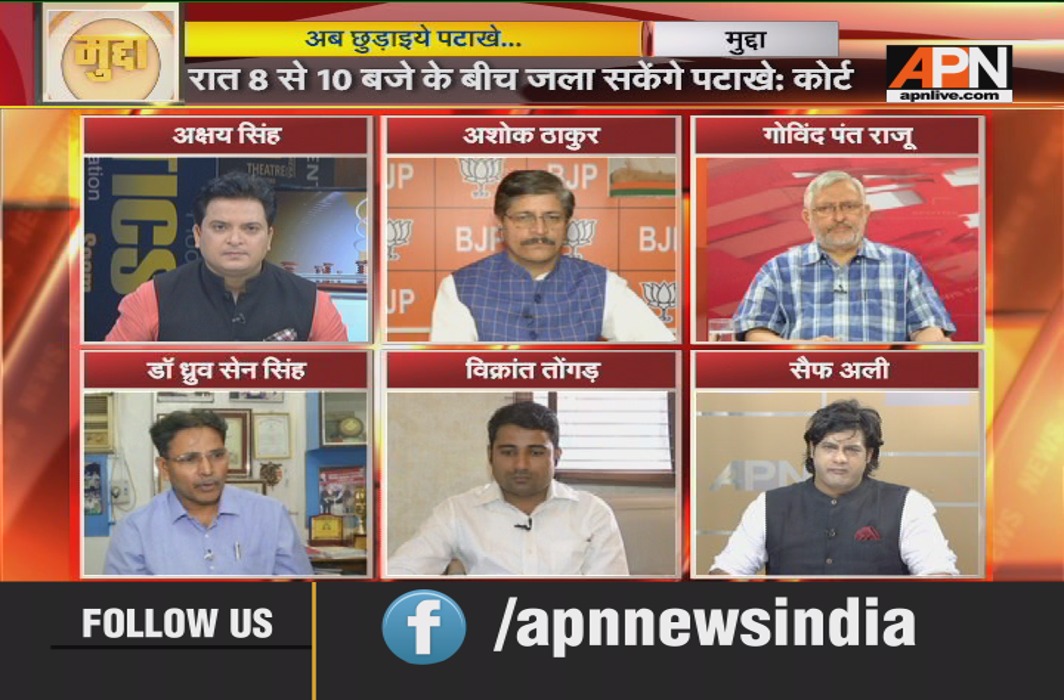 The Supreme Court has said that people can burst low-emission firecrackers between 8 pm and 10 pm this Diwali, ruling against a blanket ban on fireworks. However, the apex court ordered that firecrackers should not be too noisy or polluting. Should the courts be intervening in matters related to pollution and celebrating of festivals? APN’s Mudda discussed the issue of judicial activism. Anchorperson Akshay Tyagi posed the questions to panelists including BJP’s Ashok Thakur, Congress’s Saif Ali, environmentalists Vikrant Tomar and Dr Dhruv Sen Singh, APN consultant Govind Pant Raju.

Singh said: “This verdict has to be lauded.”

Thakur said: “Firecrackers entail huge investments. No doubt, fire cracker businesses will suffer and the industry will feel the pinch. However, the verdict was along expected lines. Businessmen should have been well-prepared. The SC has given two hours; the hours should have been increased. It is also a matter of faith. Certain things are demanded by the society, rituals and religion are among these matters. The use of crackers has gone down over the years.”

Ali said: “Why should we celebrate Diwali with firecrackers? Diwali is a festival of lights. I favour this verdict whole heartedly. The Sheila Dixit government had introduced CNG transport. Why is the BJP representative seeking longer hours? He should think of people whose health is affected.” To this, Thakur said: “Then during Eid, we should not kill animals.”

Tomar said: “It’s not that the verdict targets only one particular community. The verdict is for the good of all.”

Raju said: “I welcome the apex court verdict. But I object to the timing of this. It should have come earlier. The court should have given an order for green crackers much earlier so as not to hurt business interests. Since the crackers will be there in the market, the ban is likely to be violated in some pockets, openly or secretly. Of course, crackers pollute the air and also aid noise pollution.”

Ali said: “We will act against whatever hurts the public. There is no pollution during Bakr Eid, so why should one mention it (he said referring to a comment made by Thakur)?”

Thakur said: “If it’s a matter of noise pollution, why should people use loudspeakers during other festivals, or during namaz?”

Akshay then asked Thakur if the government can ensure loudspeaker ban while campaigning.

Singh said: “Whatever the faith, it’s everybody’s responsibility to ensure that the environment does not get polluted in any way. Therefore, it is good that the SC has given orders to control pollution.”

Tomar said: “During winter, air pollution rises, which is why ban on crackers, lighting of fire and odd/even rules are enforced. This is to avert the likelihood of a health emergency.”

Raju said:”We talk of pollution, but things work slowly. Look at the Clean Ganga Plan. For any plan to be effective, bureaucratic red tape, corruption and bribes also need to be tackled.”

Ali said: “We have to look at all aspects of the pollution story including garbage dump yards, burning of fires, polythene ban, town planning and so on. But I can’t see the government taking any strong steps. Haryana farmers are burning fires, what is happening?”

Thakur said:”The government will take all steps to ensure that the SC order on pollution is fully implemented.”