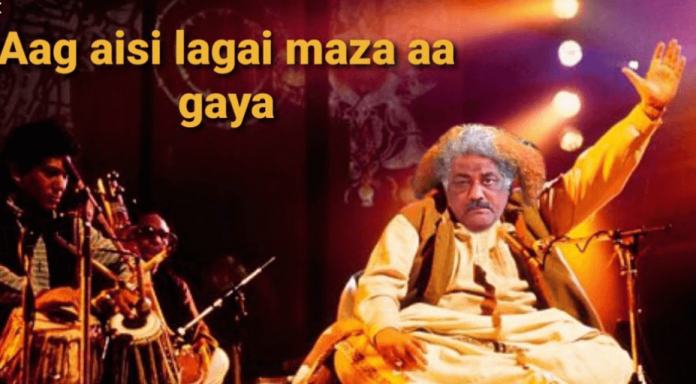 Jackie Chan movies had their heyday in the late 1980s and early 1990s with minutely-choreographed group fight sequences taking one’s breath away. But a viral video from Baraut town of Baghpat district in Uttar Pradesh is proof that the real-world fight is more coordinated than the fictional Jackie Chan fisticuffs.

The fight was waged between two rival chaat vendors with lathis and whatever else was within reach. While most of the men in the melee were relatively young, one of them, the chacha, with saffron-dyed hair and in a green kurta, gave it back as good as he got. Again dismissing all new age stigma surrounding older people.

Some passers-by captured the whole fight unspool into this panoramic WWE contest on camera, and put it on social media. After some hours, the video began trending on Twitter, social media did not waste any time in dishing out memes and jokes on it. People were comparing the incident to scenes from the film Gangs of Wasseypur directed by Anurag Kashyap.

Another Twitter user said the winner of the #Baghpat Heavyweight Championship match is.

Other Twitter user compare the incident with the Hollywood movie Harry Potter.

One of the netizen compared Chacha with one of the Harry Potter’s character Hegred.

Chacha, finally identified as Harinder, told a reporter that the rival vendor insulted his chaat and stole his customers by telling them Chacha’s chaat is not fresh.

The bizarre fight continued for about 20 minutes before it broke up. When the matter came to the limelight, Baghpat police arrested the people. According to the police, half a dozen people were injured and 8 people have been arrested since the video became viral.

On social media, users compared the fight to a WWE match and some even used the raging hashtag “Pawri Ho Rahi Hai”.

Because of his stringy, mop hairdo, Harinder, or “Chacha”, is being compared to Albert Einstein. The thing about this whole conflict, over which many laughed and held their sides in pain, is that none of these men suffered any grievous injury even if they were thulping each other with practised precision. Chacha did have a black eye, though!