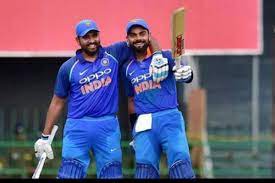 Virat Kohli, the current Indian captain across all three formats, is likely to step down from his responsibilities in ODIs and T20Is to focus on his batting and remain the Test captain, say reports. It is said that Kohli is open to sharing the captaincy with current deputy Rohit Sharma after the completion of the T20 World Cup in the United Arab Emirates and Oman.

Kohli took over the white-ball cricket captaincy from ex-captain M.S. Dhoni in 2017. Since then Kohli has taken the team to reach new heights in all formats, but he has failed to win a single major ICC trophy for the team. Another reason why Dhoni has been goaded out of retirement and appointed mentor for the team in the T20 World Cup.

A Times of India report quoting a BCCI source said Kohli is going to hand over the limited overs cricket captaincy to Sharma after the T20 World Cup. Kohli wants to focus on his batting considering the upcoming tournaments in 2022 and 2023. According to source, Kohil will remain the captain in Test cricket. In recent times, people have been questioning Virat Kohli’s ability to click with the bat, especially when the captain needed to stay at the crease. This is said to be the reason for his decision to split the captaincy and focus on his batting. Kohli last scored a century way back in November 2019 in Kolkata against Bangladesh.

Kohli has led India in 95 ODIs, winning 65 and has won 29 T20Is of the 45 matches he has captained. In Test cricket, Virat Kohli is the most successful captain in the annals of Indian cricket, having won 38 matches in the 65 matches he led the team.

On the other hand, Mumbai Indians captain and India vice-captain Rohit Sharma has won 5 IPL trophies as captain. For India, Sharma has led India 10 times in ODIs, winning 8 of them and in T20Is, he has captained 19 times of which India’s won 15 matches.

Facebook
Twitter
Pinterest
WhatsApp
Linkedin
ReddIt
Tumblr
Telegram
Mix
Previous articleTamil Nadu against NEET: Here’s why
Next articleWhen Nick Jonas opened up about how Priyanka Chopra made his life magical, his reply will melt your heart