Not cricket: Muslim baiting over Pakistan victory just not done! 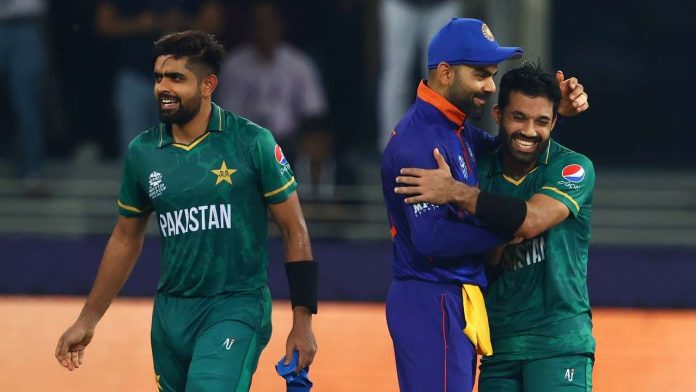 Billion Bleed Blue didn’t help on Sunday. Tears streamed copiously. Some took it on their chin and moved on, switched channels. Others hyperventilated. Seeing a conspiracy (only for Mohammed Shami, the rest played cricket, you see) in every ball slammed to the fence in a 10-wicket thrashing never before experienced. Soon to come was the communal colouring, taking offence at people celebrating the splendid performance by the Pakistan team. Many heavies succumbed to this slight and blew hot and cold. Calling for the punishment of those who hailed the loss to the arch-rival, the sundered sibling.

For a country that takes pride in papering over its otherwise blatant communalism, Sunday was no-holds-barred. Cases in point, Virendra Sehwag and Gautam Gambhir. Sehwag fumed at people bursting crackers to celebrate Pakistan’s victory in India and he said that firecrackers are banned during Diwali but yesterday in parts of India there were firecrackers to celebrate Pakistan’s victory. Achha, they must have been celebrating the victory of cricket. Toh, what’s the harm in fireworks on Diwali. Hypocrisy Kyun, Saara gyaan tab hi yaad aata hai. Since the big-hitter stepped out against the crackers, the veteran found company in the other Delhi opener, who is now an MP.

East Delhi MP Gautam Gambhir said that those who are bursting crackers on Pakistan’s victory can’t be Indians. He further said that we stand by our boys.

Well, if you think that was just the flak, then let us tell you that it didn’t stop there. After India lost the match, some of the users started hurling abuses at Mohammed Shami and even called him a traitor.

One of the users said that he must be on Pakistan’s side, that is the reason why we lost the match.

Some others saw India’s performance jinxed (aka panauti) by the presence of some heavyweights at the Dubai International Stadium, we wonder who they are talking of? Would you tell us?