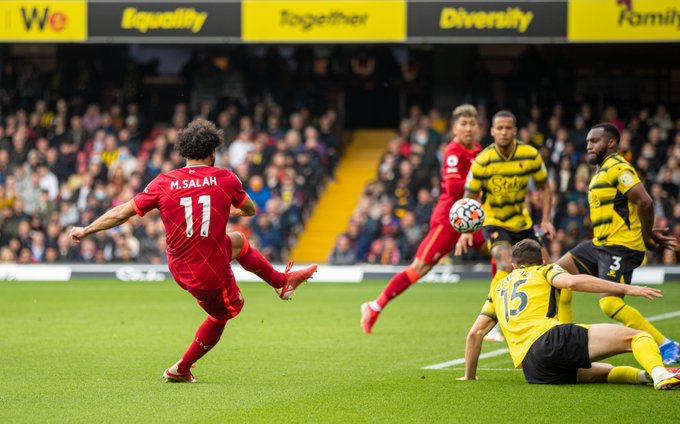 Mohamed Salah scored a sensational solo goal and produced a sublime assist to Sadio Mane, in a 5-0 victory for Liverpool against Watford in a Premier League match. Whereas, Roberto Firmino scored a hat-trick and Mane scoring his 100th Premier League goal,  Jurgen Klopp’s Liverpool go to the top of the Premier League table.

Liverpool took the lead in the 9th minute of the game when Salah put a sublime pass to Mane with his left foot for Mane to register his 100th goal in Premier League. Liverpool were already 2-0 up by the halfway of the game with Mane and Firmino’s goals, while in the second half Salah scored a wonderful solo goal and Firmino completed his hat-trick with a late goal in the 91st minute.

The Egyptian forward is in the form of his life and has been a standout performer this season. First, he provided a beautiful assist for Sadio Mane and then scored an unbelievable solo goal. After receiving the ball from Firmino inside the box, Salah somehow dribbled past several Watford players before cutting it back and then smashing into the corner of the net. Watford goalkeeper Ben Foster couldn’t help but watch the ball getting into the net.

Liverpool controlled the entire game with 80% possession to their side. This win lifts Reds back to the top of the Premier League table with 18 points in 8 matches, two ahead of European champion Chelsea who has played a game lesser.

This was the first match of Claudio Ranieri as Watford coach, which ended in demolition by Liverpool, who delivered a master class.