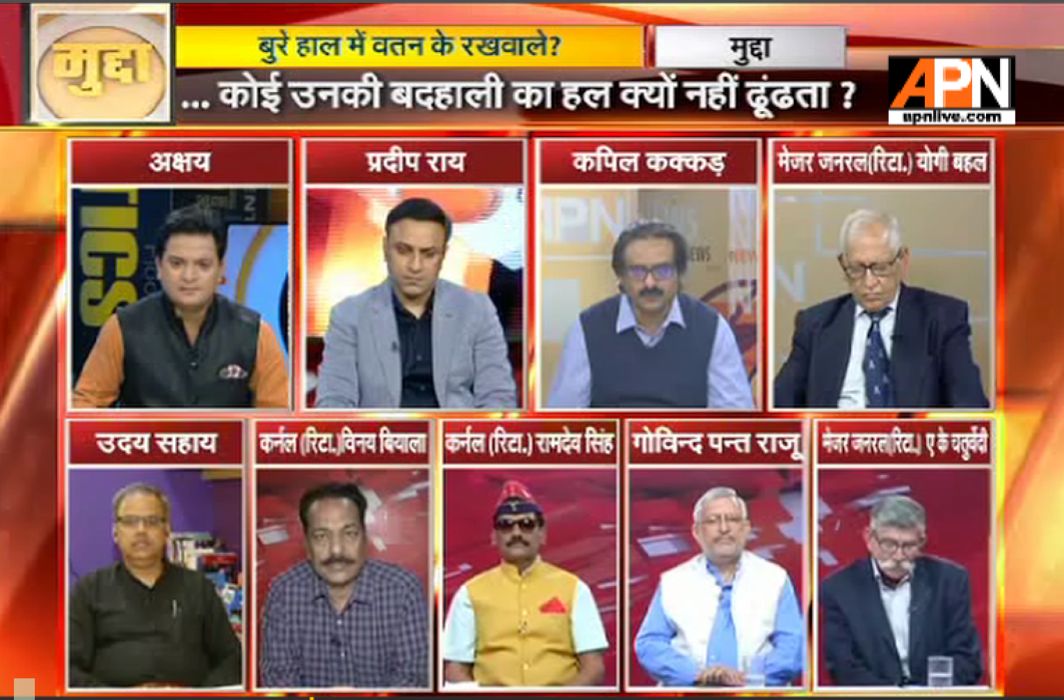 Even as tension along the border is on the rise, recent incidents of skirmish among jawans within the army and the police force have also come up, indicating a disturbing trend. Deprived of their offs, living in poor conditions far away from families, and unsure of when the Seventh Pay Commission will be implemented, jawans are being pushed into frustration, and forced to take steps they would not if the situation were more comfortable. Recently, an assistant commandant of the RPF was killed and three others were injured when a constable of the force opened fire from his service rifle in Meghalaya. Many such incidents keep happening all over the country, even while political leaders try to score brownie points from these tragedies. These and similar issues were the subject of Mudda, APN’s popular debate.

Col Singh said “defence is given 10 times more work than it can handle, and at many places even basic amenities are tough to access. They have to tackle insurgency, civil security, border escalation and so on. Tensions are bound to rise”.

Maj Gen Yogi Behl said that in the last 70 years, babudom and politicians have systematically downgraded the army, but the army has never shirked its responsibilities. “In 1947, politicians told us to come back from PoK, and that acted as a morale dampener. In the China war, our jawans were ill-equipped and under-clothed. In 1965, then prime minister Lal Bahadur Shastri went for peace talks in Russia, and Haji Pir Pass captured by us had to be given away… all this has affected the morale of the forces.”

Pradeep Rai said if the government of the day does not keep in mind army and police welfare, incidents will keep happening. After all, the army is a disciplined force and a strict regimen has to be followed. “A jawan should be allowed to visit home and should get proper nutrition. The government needs to suitably redesign its policies to ensure that the lower level staff if equally happy and not demoralised.”

Sahay said that urgent thinking needs to be done to keep the field staff in good spirits.

Kakkar pointed out that in the Northeast and Kashmir, suicide rate is the highest among jawans because they are battling extreme situations. They are living a life of helplessness and tiredness, and this needs to change. “Loneliness is high among jawans and there is no coping mechanism,” he added.

Col Biyala said the situation in the army is much better now than what it was earlier. But local leaders have to take care of the implementation aspect. A good officer will plan holidays of all personnel well in advance. Each personnel needs to go home at least once in six months.

Regarding the food, Maj Gen Behl said that police can tie up with local hotels, but that luxury may not be available to jawans serving in remote, inhospitable areas.

Raju said the police, army and the paramilitary forces grappling with different issues. Dedicated work hours need to assigned to all personnel, so that they have enough time to rejuvenate.

Kakkar said that he noticed insensitivity in recruitment.

Rai said that in Mumbai, work hours are assigned to the police though the situation in the rest of the state is far different.

Uday Sahay said the foundation is faulty. “Saying that the police force is available 24 hours on duty, sets off a very negative trigger. Do we know our men? A fresh perspective in thinking is needed,” he said.

Col Ramdev Singh said that when any soldier is martyred, politicians rush to take credit, and look for photo-ops, but later the family is forgotten.

Rai said that the government knows pretty well the situation among jawans and in the police force; many of them visit jails and border areas. “However, priority needs to be accorded for the welfare of those who help us feel secure in our county, and in our homes.”