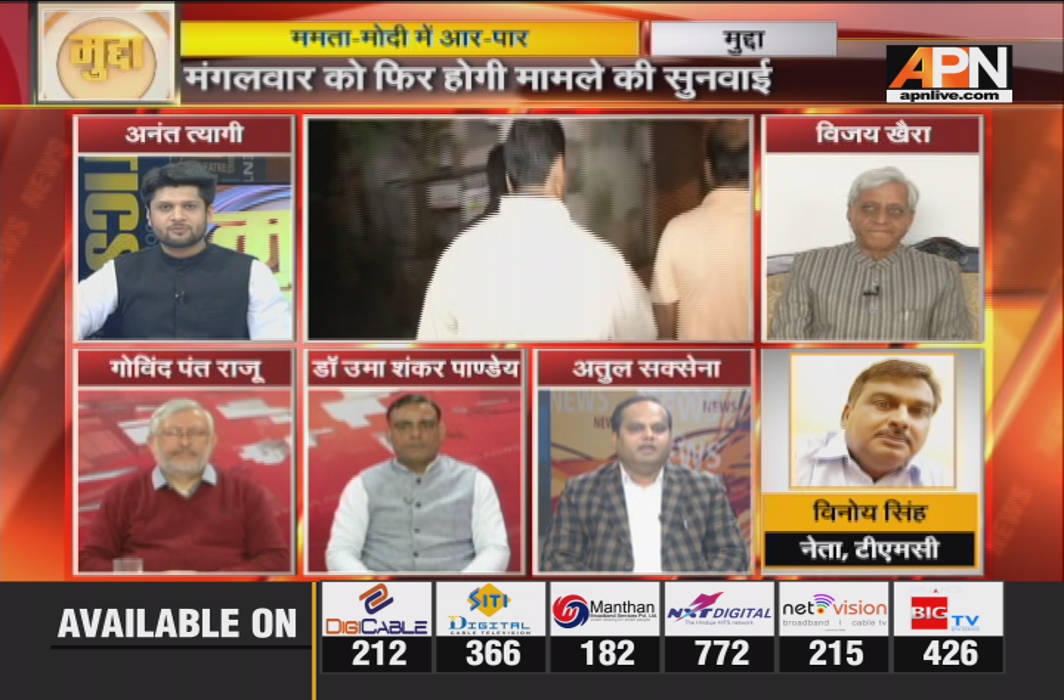 West Bengal Chief Mamata Banerjee has been on a dharna since last evening in protest against what she calls an “attack on federalism”. The face-off erupted between the Chief Minister and the Centre after CBI officials were intercepted in Kolkata. They were not allowed to meet the top cop of the state. Why is Mamta saving the police commissioner? Meanwhile, the Supreme Court on Monday agreed to give an urgent hearing to applications moved by the CBI alleging destruction of evidence related to Sharada chief fund by the police commissioner. APN’s popular debate Mudda discussed the latest developments.Anchorperson Anant posed the questions to panellists, including the SP’s Atul Saxena, Congress’s Uma Shankar Pandey, BJP’s Vijay Khera, TMC’s Vinoy Singh, former IPS Narayan Rai and APN consultant Govind Pant Raju.

Rai said:”Bureaucrats are suffering in this political ping pong. The CBI has been caught in a political dragnet. Why was there hurry? There is more to it than meets the eye.”

Saxena said: “It looks like Hitler-raj. Modiji is trying to use the CBI to instil fear. The common man has faith in the CBI, but it has become a ploy in the hands of Modi and Shah. There is a way to investigate. CBI cannot go directly to the police commssioner.”

Pandey said: “Government has to meet the people’s expectations. Modi is using the CBI, questions are bound to arise on the role of the PM. Earlier, things never became so bad, the CBI was never dragged to the roads; RBI governor has resigned under BJP rule,  data clean up is going on, what is all this? Earlier, this was unheard of. Elections are so near now.  Opposition parties are bound to get together because the government is going too far.”

Raju said: “This is Mamata Banerjee’s fight. BJP is a direct challenge to her, she is ruffled by the BJP. Mamata has no challenge from the Congress or the opposition parties. If BJP makes inroads in Bengal, it will reflect poorly on Mamata’s stature.”

Vinoy Singh said: ”CBI is acting like Modiji’s ghulam. BJP will make no inroads in West Bengal. Mamata is not against the law. The Sharada chit fund matter is in the courts. Mamata is on dharna because the federal structure of the country is being threatened. Mamata is sure to be the next PM.”

Shankar said:”Right now the issue is not of stature, but what is happening in the country. The alleged names that have cropped up in the Sharada chit fund, like Mukul Rai and Hemant Bishwa Sharma…they are with the BJP.”

Rai said: “CBI has been probing the matter, but it has been in a hurry. I can’t see why there is so much of hurry in the matter.”

Khera said: “I am surprised Rai is talking like this. This investigation has been going on even since before the time the BJP came to power. CBI had sent four notices to Rajeev Kumar, he did not respond. How could he ignore four summons? High Court has never said that investigations can’t go on, Rajeev Kumar should have found the time to give his response.”

Saxena said: “Centre cannot interfere unless it is something unavoidable. Sharada chit fund probe has been going on for the last five years. Rajeev Kumar is SIT chairman. What kind of proof can he have at his residence?”

Uma Shankar Pandey said: “It has been proved time and gain that the CBI is in the BJP’s pocket.”

Raju said: “It is like the times of the Mughal Sultanate. If centre wanted to put pressure, I would like to say, just asking questions to the police commissioner is not any pressure. What about the CM’s responsibility. Is it to sit on a dharna like this? Isn’t she undermining the stature of the CM? Mukul Rai is still being probed and will not be spared If found guilty. Mamata is trying to grab the political limelight.”

Khera said: “I would like to say that the probe is with the CBI. Central officers can be probed by the CBI at any time.”