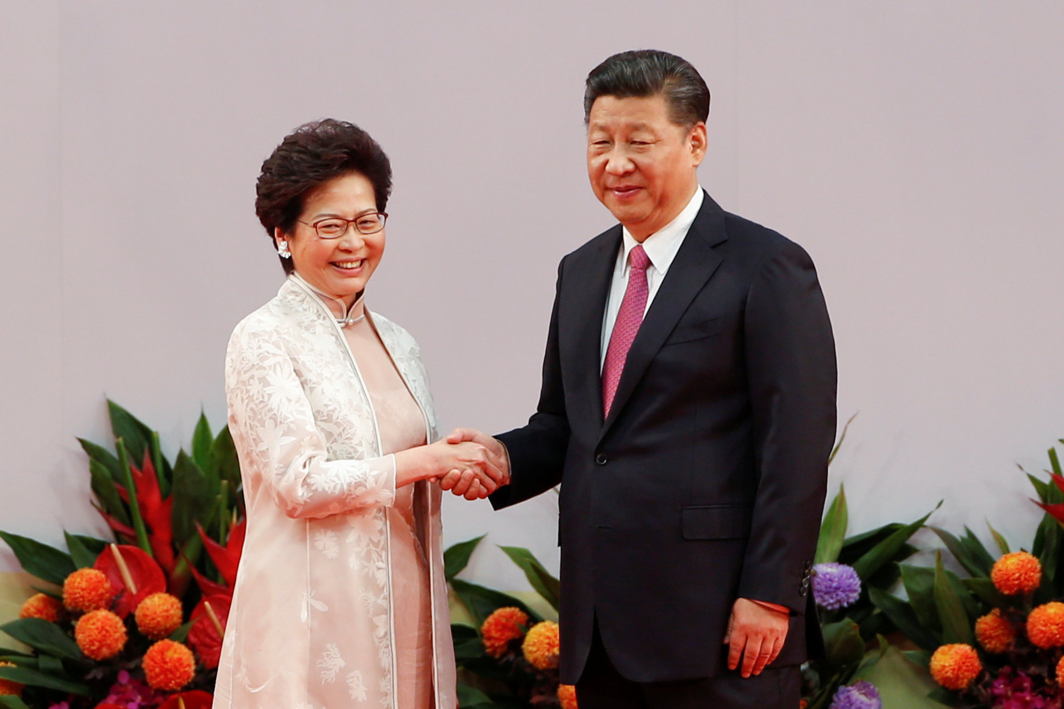 Hong Kong witnessed clashes between pro and anti China protesters on Saturday when President Xi Jinping swore in Carrie Lam as new leader marking the 20th anniversary of its handover by the last British governor to Chinese rule.

Security was tightened near the harbor front convention centre, the venue for the oath ceremony, where on this day in 1997, Chris Pattern, the last colonial governor handed back Hong Kong to Chinese rule.

While addressing a packed hall of dignitaries and mostly pro-Beijing establishment figures at the swearing ceremony, Chinese President Xi Jinping said “Any attempt to endanger China’s sovereignty and security, challenge the power of the central government and the authority of the Basic Law of the HKSAR (Hong Kong Special Administrative Region) or use Hong Kong to carry out infiltration and sabotage activities against the mainland is an act that crosses the red line and is absolutely impermissible”.

Carrie Lam took oath of office as Chief Executive of Hong Kong under Chinese national flag before shaking hands with President Xi Jinping. She was chosen by 1200 person “election committee” having pro-China and pro-establishment loyalists in March this year.

Lam spoke in Mandarin, mostly spoken in Northern China, instead of Cantonese dialect used in Hong Kong. She expressed her desire to create harmonious society and explore new land supply in a city where the sky high cost of housing has triggered discontent.

Lam’s swearing in by President Xi is considered to be deeply symbolic for frustrated activists who have been pushing for fully free leadership elections for the city.

Under Hong Kong’s mini-constitution, the Basic Law, the financial hub is guaranteed its freedoms for “at least 50 years” after 1997. HKSAR is run under a “one country, two systems” formula which allows wide-ranging autonomy.

The event was followed by declaration by Chinese Foreign Ministry on Friday that the document signed by Britain and China which initiated the handover “is no longer relevant”.

The 1997 Sino-British Joint Declaration gave Hong Kong rights which are not seen in mainland China through a semi-autonomous “one country, two systems” agreement lasting 50 years.

The pro democracy activists fear that those freedoms are now under threat from an assertive Beijing with growing interference in affairs ranging from politics, media and education. Many believe that Carrie Lam was a China stooge in Hong Kong where Beijing is tightening grip on the freedom of nearly eight million people.

The protesters were seen clashing each other while engaged in rival sloganeering. Pro democracy activists were holding banners with “Democracy, Self determination” while pro Beijing crowd was shouting “Long live China”. Scores of pro-democracy protesters were taken away by police, while several pro-China groups remained, cheering loudly and waving flags.

The pro democracy protesters were also seen supporting the victims of Beijing’s 1989 Tiananmen Square crackdown. They took out a symbolic coffin towards convention centre, which was kicked by a pro-Beijing activist.

Having failed in getting democratic establishment in Hong Kong, some young campaigners started supporting call for self determination or even independence for the mainland China. This caused a lot of frustration in Beijing.

President Xi Jinping’s visit to Hong Kong amidst heightened tension due to pro democracy protests was considered to be a major development. The opponents allege that China is violating “one country, two systems” arrangement by encroaching on city’s freedom in areas ranging from politics to media and education.