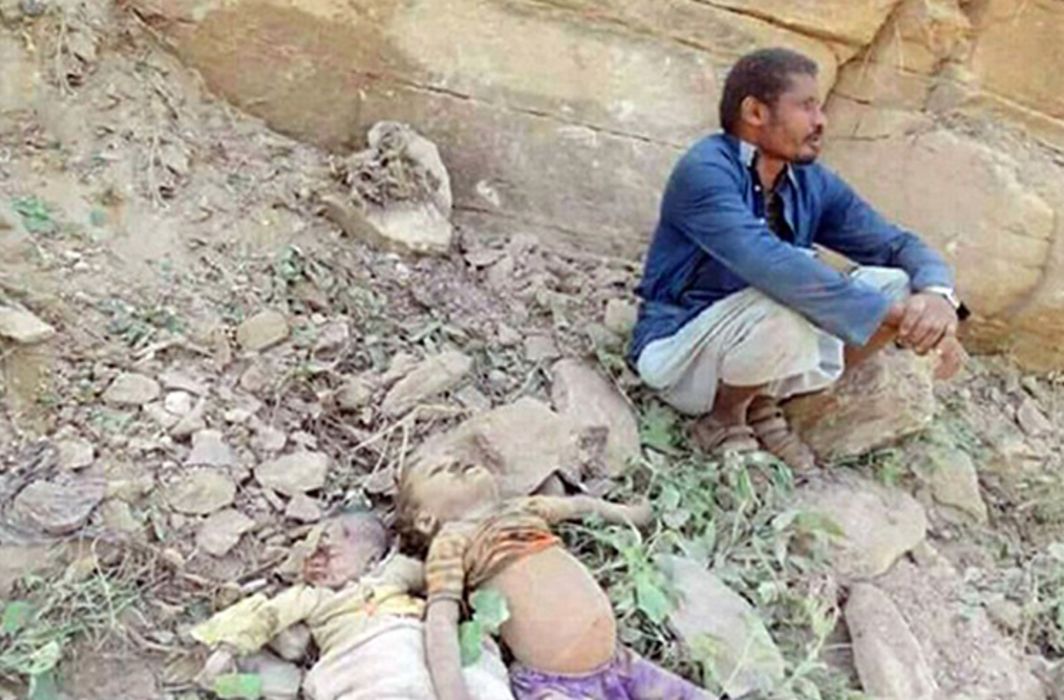 Amidst ongoing Saudi-led aggression on Yemen, a photo of a father from Sa’ada province sitting next to the dead bodies of his two children, killed in the air raids became viral through social media platforms. The heart rendering scene showing helpless father who probably become immune to the daily killings around him has raised a great public interaction.

Meantime, Associated Press reports of the immense hunger among the Yemeni civilians. Many Yemeni families have nothing to eat but leaves as a humanitarian crisis reaches a critical stage.

Journalists of the agency visited Aslam district situated in Yemen’s north-western Hajjah province where they witnessed the worsening hunger. Families with starving children have nothing to eat but the leaves of local vine, known as Halas in Arabic or Arabian Waz Leaf in English, boiled into a sour and made acidic green paste.

The agency reports that the main health centre was flooded with dozens of emaciated children. It said, “Excruciatingly thin toddlers, eyes bulging, sat in a plastic washtub used in a make-shift scale as nurses weighed each one. Their papery skin was stretched tight over pencil-like limbs and knobby knees. Nurses measured their forearms, just a few centimetres in diameter, marking the worst stages of malnutrition”.

Aslam district recorded one of Hajjah’s highest jumps in the number of malnourished children, from 384 cases being treated in January- an additional 1,319 more came in over the next six months.

Adding to the woes for the victims of Saudi-led coalition, Aslam’s main health centre has no paediatricians, electricity, oxygen cylinders and fuel for generators.

Saleh al-Faqih, a worker in a mobile Health Ministry clinic has told that “Aslam is just another picture of Somalia.”

A malnourished mother in al-Mashrada village, having a seven-month old girl in her lap said, “Since the day she was born, I have not had the money to buy her milk or buy her medicine.” The mother feeds her whole family with Halas mush.

In January this year, London based The Guardian reported that war in Yemen has killed or injured more than 5000mchildren and left another four lakh severely malnourished and fighting for their lives.

UNICEF report unveiled that nearly 2 million Yemeni children were out of school, a quarter of them since the conflict escalated with Saudi-led coalition intervention in March 2015.

The offensive initially consisted of a bombing campaign, but was later coupled with a naval blockade and the deployment of ground forces in the country. The blockade has halted humanitarian deliveries of food and medicine.