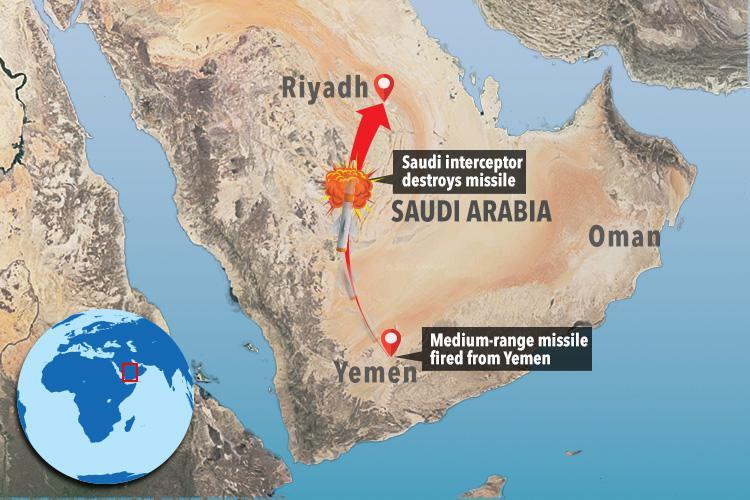 Saudi Arabia has claimed to have intercepted and destroyed a ballistic missile near Riyadh’s King Khaled international airport on Saturday. It was verified by Yemen’s Houthi forces  with their claimed of firing a long range ballistic missile travelling more than 800 km over the border with Saudi Arabia.

The military alliance led by Saudi Arabia has been pounding Yemen since March 2015 in an attempt to crush the popular Houthi Ansarullah movement and reinstate its ally former president Abd Rabbuh Mansur Hadi in that country.

Aljazeera quoted a Houthi spokesman that they launched a Burkan 2H missile, a scud type missile with a range of more than 800 km towards Riyadh late on Saturday.

Saudi lead coalition spokesman claimed that air defence intercepted the missile, bringing it down to the north of the airport.  He said, “Shattered fragments from the intercepted missile landed in an uninhabited area of the airport and there were no injuries.”

The Houthi spokesman extended  their threat to hit other capitals in the region who were part of the Saudi led coalition. He said, “The capital cities of countries that continually shell us, targeting innocent civilians, will not be spared from our missiles.”

On the other side, Yemen’s Revolutionary Committee is supported by Yemen Army (pro-Saleh Abdullah (former President) and Houthis), Yemen Republican Guard, Yemen Air Force and Shia Ahrar al-Najran Movement. Houthis are allegedly being supported by Iran and Hezbollah.

Meanwhile, Yemen’s official Saba news agency has reported that the missile force of the army and popular forces have claimed that the “ballistic missile hit the target accurately.”

Moreover, a military official told the news agency on Saturday that the popular forces targeted gatherings of Saudi mercenaries’ sites in some places in Asir province killing and injuring dozens of them.

A Houthi spokesman Colonel Aziz Rashed has reportedly told Tehran based Press TV on Sunday morning, “Our Yemeni forces succeeded in launching a missile, a Borkan H2 long distance missile, at the King Khalid international airport in north eastern Riyadh which was in response to the massacres committed by the US-Saudi coalition in Yemen.”

He further said, “This comes in order to even out power between the coalition and Yemen, who have been attempting to fight more than one country in the past three years.”

On the other side, Saudi state news channel Al Ekhbariya said, “The missile was of limited size (and) no injuries or damage” were reported.  It further said that the missile was destroyed near Riyadh’s King Khaled international airport, which was functioning normally.

Meanwhile Saudi Press Agency (SPA) reported on Saturday that Saudi-led military coalition has claimed that an air strike that hit a market in Yemen’s northern Sa’ada province was a legitimate military target.

On Wednesday an air strike carried out by the Saudi led coalition killed 26 people at a hotel and an adjoining market, where the Houthi fighters gather.

Till date more than 12,000 people have been killed in more than two and half years destroying infrastructure including hospitals, schools and factories.

Recently Saudi Arabia’s Crown Prince Muhammed bin Salman had vowed not to allow Yemen’s Houthi Ansarullah movement to emerge as another Hezbollah in the region.