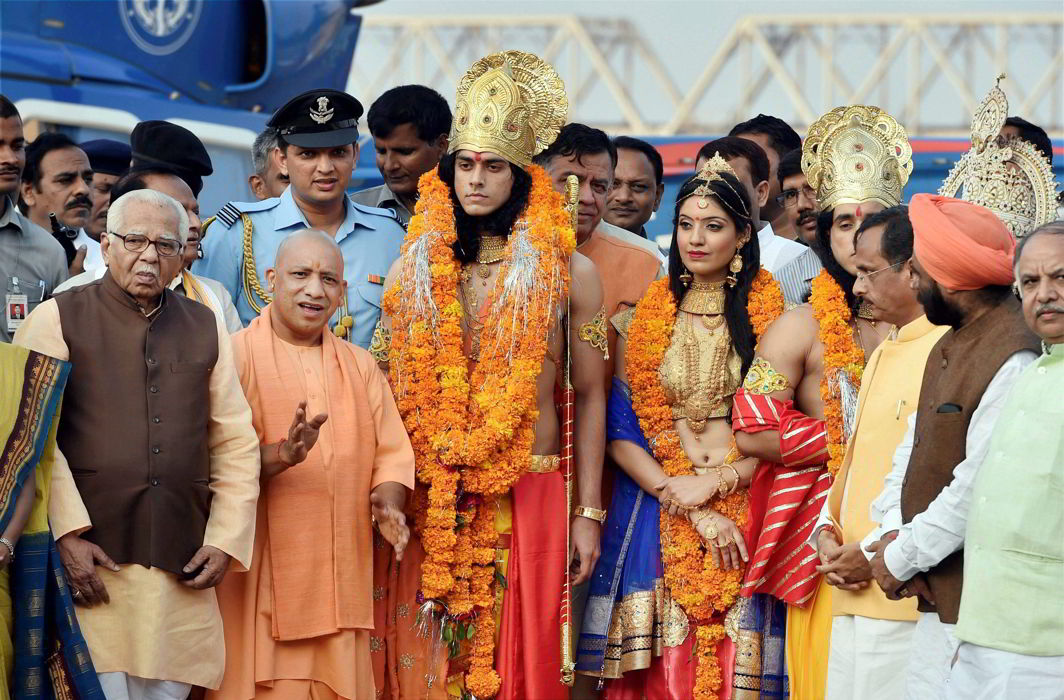 A day after he kick-started the state-sponsored grand Diwali celebrations in Ayodhya, Uttar Pradesh chief minister Yogi Adityanath visited the disputed Ram Janmbhoomi-Babri Masjid site, on Thursday, and also warned his political detractors to not interfere in his faith.

The chief minister’s visit to the disputed site, which had been mired in a title suit that the Supreme Court is expected to begin proceedings on in December, comes at a time when the Adityanath government has been drawing flak from the Opposition for reviving the BJP’s ‘Hindutva agenda’.

Adityanath had, on Wednesday, insisted that the Opposition should not see any political designs behind the elaborate Diwali celebrations that his government had organised on the banks of Saryu river in Ayodhya. However, the chief minister went on the offensive on Thursday, asserting that the temple town had “remained neglected, faced attacks continuously” but that he was now going to develop Ayodhya with his government-proposed schemes for the district that collectively envisage works amounting to a massive Rs 133 crore.

“Shri Ram Janmabhoomi mein shraddhalu desh aur duniya se aate hain, unki suraksha aur suvidha, saaf safai dekhne ke liye bhi main wahan gaya (Devotees visit Shri Ram Janmabhoomi from all over the country and the world, I was there to check the preparations in terms of their security, convenience, and cleanliness as well),” Adityanath was quoted as saying by news agency ANI.

“It’s about my personal faith as well. How can the opposition interfere in that?” he added.

The chief minister’s assertions come at a time when the BJP is drawing criticism from all quarters over the controversial remarks made by its elected leaders (like Sardhana MLA, Sandeep Som and MPs Vinay Katiyar and Subramanian Swamy) over the historic Taj Mahal. Adityanath had himself intervened in the issue on Tuesday, insisting that there should not be any politics over the Taj Mahal. His comments were seen as a direct censure of the likes of Sangeet Som who called the 17th Century Mughal-era marble mausoleum as a “blot on Indian culture”.

However, Adityanath’s stern remarks over the Taj Mahal controversy didn’t put an end to the brouhaha. BJP’s Kanpur MP Vinay Katiyar claimed on Wednesday that the UNESCO World Heritage Site in Agra was actually a Hindu temple which was “destroyed by the Mughals” and Rajya Sabha MP Subramanian Swamy too jumped into the controversy, claiming that he had documents to prove that land for the mausoleum was “stolen” by Mughal Emperor Shah Jahan from the Jaipur royal family!

While Adityanath may insist that his grand Diwali celebrations in Ayodhya, visit to the Ram Janmbhoomi site, the Sugriva temple and Hanumangarhi Temple were all part of his plan to promote the temple town as a religious tourism destination, the Opposition isn’t willing to buy the argument.

Several Opposition leaders, including those from the Congress, SP, BSP and Left parties, have called out Adityanath’s visit to Ayodhya along with the Taj Mahal row, as the BJP’s “planned effort” towards communal polarisation and that the party which came to power at the Centre on promises of ushering in development was now returning to its original plank of ‘Hindutva’.