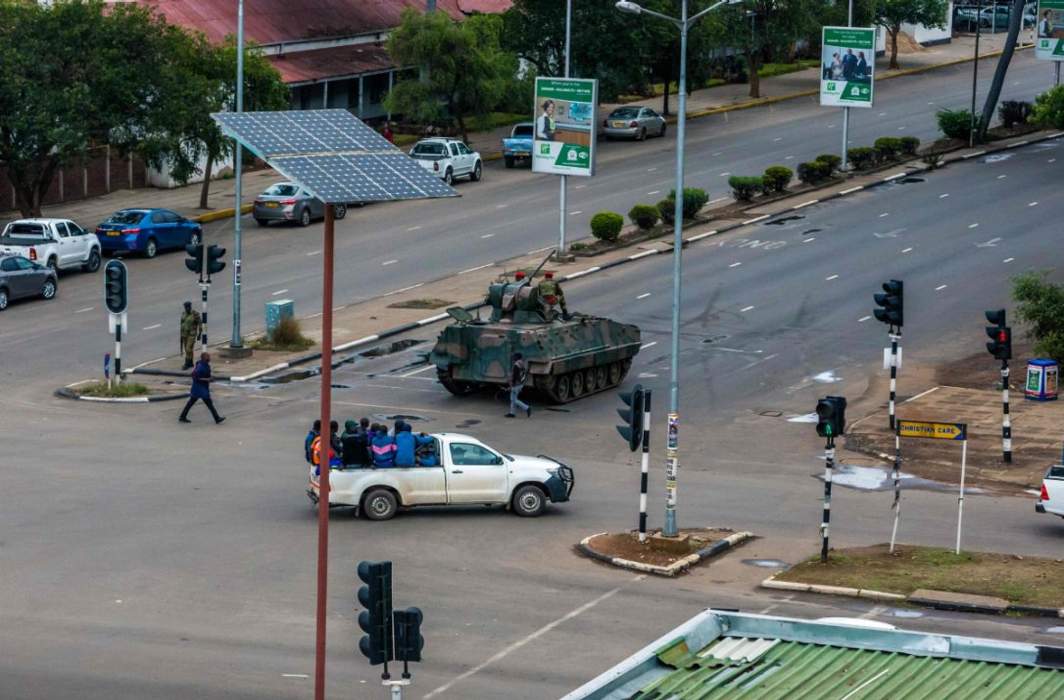 Robert Mugabe and his family’s political future remains hanging as Harare witnessed usual business on Thursday. No people’s outcry was reported over the sudden taking over all powers by country’s military to target “criminals” close to the outgoing leader.

According to the reports, the military takeover went unchallenged and efforts have apparently begun to form a transitional government. Special envoys of South African President Jacob Zuma arrived in Harare on Wednesday evening. Zuma, as chair of the Southern African Development Community (SADC), has called for an emergency meeting in Botswana on Thursday.

CNN reports that discussions were taking place with military leaders with the tacit support from key African nations. Tanks were seen at important intersections of the capital throughout Wednesday.  The downtown residents described the situation as “quite calm” despite deployment of military armoured vehicles.

There are reports that Robert Mugabe might be offered safe exit from Zimbabwe without facing any prosecution.

A student told in Harare, “There are military tanks on the streets, which has never happened before. The military is obviously now in charge despite their insistence that it’s not a coup. It is.”

Zimbabwe was plunged into political uncertainty on Wednesday when army spokesman Maj. Gen. S.B. Moyo announced that army was conducting an operation to target “criminals” close to Mugabe.  He also assured that Mugabe and his family were safe and sound.

Meanwhile, South African President Jacob Zuma has said that Mugabe is being detained at his home and he is unable to leave. Military personnel were deployed at presidential palace, parliament, airport and the state broadcaster building.

Meanwhile, Kudzanai Chipan, head of the Zimbabwe African National Union-Patriotic Front (ZANU-PF) Youth League, has issued an apology for criticizing the head of the armed forces earlier this week. He spoke on public broadcaster on Thursday.

However, South African President Jacob Zuma did not choose to denounce the Zimbabwe military’s move. Instead he called on military leadership to show restraint and expressed hope they “will not move and do more damage.”

He further said, “I am hoping that the situation is going to be controlled so peace and stability comes back to Zimbabwe.”

A meeting of the Southern African Development Community (SADC) was called by Jacob Zuma on Thursday in Botswana. The meeting will include foreign ministers and delegates from Angola, Tanzania and Zambia.

The US embassy in Harare said in a statement, “We call on Zimbabwean military leaders to exercise restraint, respect the rule of law, uphold the constitutionally-protected rights of all citizens, and to quickly return the country to normalcy.”

The military takeover is followed by a succession battle in Mugabe’s ruling ZANU-PF, especially after recent removal of Vice-President Emmerson Mnangagwa. Observers believe that Mugabe was preparing to hand over powers to his wife Grace Mugabe.

Weird morning… Moyo, Kasukuwere, Chihuri & Chombo haven’t shown up for work and ZBC seems to be playing some half decent tunes for a change. Something going on I don’t know about? #Zimbabwe