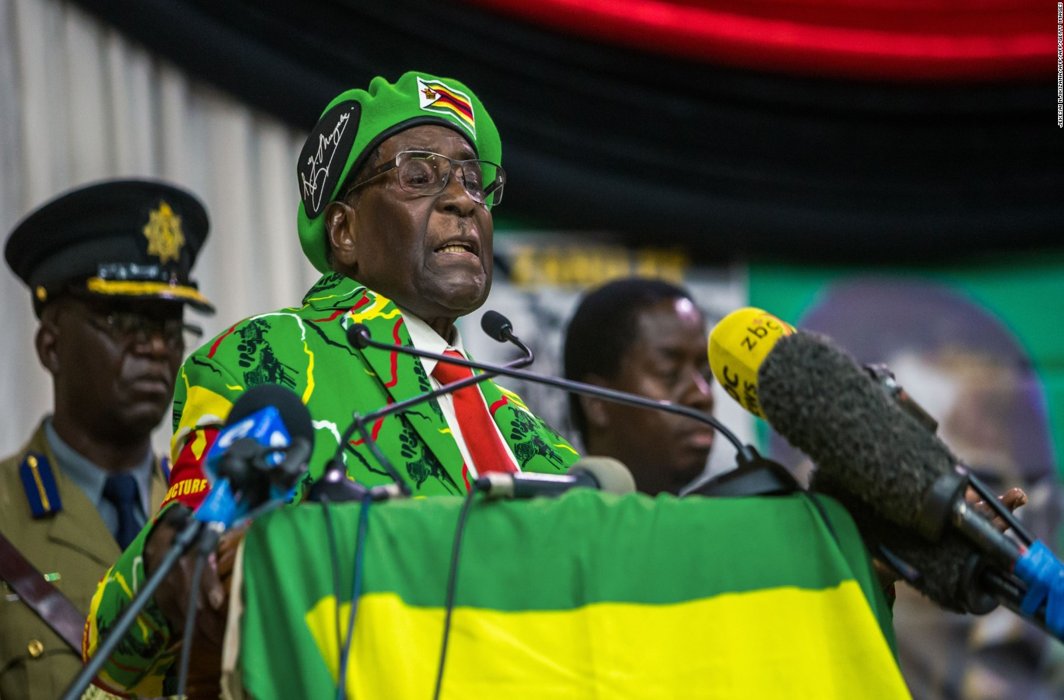 Military firm on assault against “criminals” but denies Coup d’etat

In a sudden development plunging Zimbabwe into political uncertainty, top military man has seized power in a targeted assault on “criminals” around President Robert Mugabe, 93, who has assured the nation and global community of the leader and his family being “safe and sound”

According to Reuters Zimbabwe’s Major-General SB Moyo, chief of staff logistics, said on national television on Wednesday that the move was targeted to assault on “criminals” around President Robert Mugabe who were causing social and economic suffering.

Reports indicate that soldiers and armoured vehicles blocked the roads leading to the main government buildings, including parliament and the courts in central Harare. Eyewitnesses said that people were seen queued for cash outside banks.

Major General SB Moyo said, “We are only targeting criminals around him (Mugabe) who are committing crimes that are causing social and economic suffering in the country in order to bring them to justice. As soon as we have accomplished our mission, we expect that the situation will return to normalcy.”

A government source has also confirmed the detention of Finance Minister Ignatius Chombo by the military officials. Chombo was a leading member of the so-called ‘G40’ faction of the ruling Zanu-PF party, led by Mugabe’s wife Grace, who had been vying to succeed Mugabe.

Weird morning… Moyo, Kasukuwere, Chihuri & Chombo haven’t shown up for work and ZBC seems to be playing some half decent tunes for a change. Something going on I don’t know about? #Zimbabwe

Earlier on Tuesday, soldiers were deployed across Harare who seized the state broadcaster after Mugabe’s ruling Zanu-PF party accused the head of the military of treason, prompting frenzied speculation of a coup.
According to Harare based The Herald daily the Zimbabwe African National Union- Patriotic Front (ZANU-PF) Youth League, on Tuesday said it will stand by President Mugabe in the face of any threat to his position as the constitutionally elected leader of the country. Secretary of the Youth League Affairs Cde Kudzanai Chipanga told journalists on Tuesday that young people will not allow anyone to interfere with President Mugabe’s leadership.

In a video message available on youtube the youth leader was heard saying, “It is our country and future at stake and we will not let any individual military man interfere with the leader of the party and legitimately voted President of this country, Cde Robert Gabriel Mugabe. All those in security sector fatigues who wish to engage in politics are free to throw their hats in the ring and not hide behind the barrel of a gun. We the youths of Zimbabwe constitute the majority of the population in our millions and it is our future which is at stake. Freedom is a non-negotiable birthright bestowed upon us by the revolution.”

In the immediate reaction to the Zanu –PF Youth League statement, General Constantino Chiwenga, the commander of the Defence Forces, in the unprecedented reprimand of President Mugabe and Zanu- PF, warned against firing of liberation movement stalwarts from within its ranks.

The military commander thundered at the media saying, “The current purging of which is clearly targeting members of the party with a liberation background must stop forthwith.”

Last week Mugabe removed Vice President Emmerson Mnangagwa from both the government and the ruling party.

Within Just 24 hours after Chiwenga’s threatening statement to intervene to end a purge, a Reuters reporter saw armoured personnel carriers on main roads around the capital. During the late evening hours aggressive soldiers were seen asking car drivers to keep moving through the darkness. The journalist who reported from ground zero was barked by a soldier, “Don’t try anything funny. Just go”.

The soldiers overran the ZBC, state broadcaster and ordered its staff to leave and even manhandled some of the resisting ones. Three explosions were heard in the heart of the capital Harare.

Robert Mugabe has led Zimbabwe for the last 37 years. His opponents blame him as a despot who has destroyed one of Africa’s most promising states because of disastrous handling of the country’s economy and willingness to resort violence against them.

The United States and British governments have issued advisories to their citizens in Harare to stay indoors because of “political uncertainty.”

Zimbabwe has been on edge since Monday when Commander of the Zimbabwe Defence Forces Chiwenga announced his readiness to “step in” to end a purge of supporters of sacked vice-president Emmerson Mnangagwa.

The sacked vice president Emmerson Mnangagwa, a former security chief nicknamed “The Crocodile”, was appointed only a few months ago. He was considered to be a favourite to succeed his life-long political patron Mugabe. But Mnangagwa was ousted a week ago to pave the way for Mugabe’s 52-year-old wife Grace to succeed him.

Mugabe chaired a weekly cabinet meeting in the capital on Tuesday, officials said, and afterwards Zanu-PF said it stood by the “primacy of politics over the gun” and accused Chiwenga of “treasonable conduct … meant to incite insurrection”.

The grim situation was indicated because neither Mugabe nor Grace have responded in public to Chiwenga’s remarks and state media did not publish his statement.

In recent years, the economic meltdown has reached a very low level. The growing inflation is a major concern for the people. At present, imported goods were running out and economists say that currently inflation growth is rated at 50 percent a month.

Grace Mugabe’s rise has brought her into conflict with the independence-era war veterans, who enjoyed privileged status in Zimbabwe until the last two years when they spearheaded criticism of Mugabe’s handling of the economy.

According to the a trove of intelligence documents studied by Reuters, Mnangagwa  was planning to revitalise the economy by bringing back thousands of white farmers thrown out of the country some two decades ago. He was considered to be reviving relations with world financial institutions including World Bank and IMF.

Robert Gabriel Mugabe has been President since 1987. Earlier he was Prime Minister for seven years. He chaired Zimbabwe African National Union (ZANU) group from 1975 to 1980. Ideological he is knows as African nationalist, during 1970s and 1980s he was identified as a Marxixt-Leninist. However after 1990s he is known as socialist. His policies have been described as Mugabeism.

Congress President Sonia Gandhi on Friday hit out at the Centre over the ongoing farmers’ agitation, alleging that the government has shown...
Read more