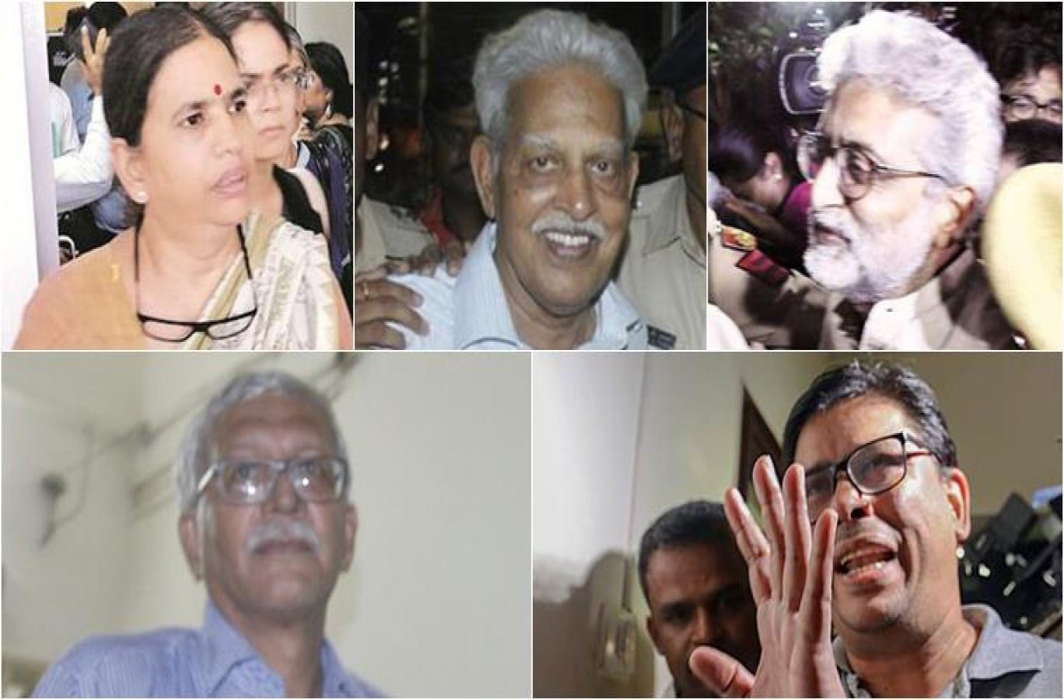 The Supreme Court on Thursday, September 20, reserved its verdict on the arrests of activists following raids in the Bhima Koregaon case.

The bench headed by Chief Justice of India (CJI) Dipak Misra and also comprising Justices AM Khanwilkar and DY Chandrachud, asked the Maharashtra Police to file their case diary pertaining to the ongoing investigation in the case by September 24. It also asked the parties to file their written submissions by then.

The SC bench reserved judgment after the counsel for both parties, including senior advocates Abhishek Manu Singhvi and Harish Salve, concluded their submissions.

Historian Romila Thapar and others had sought the immediate release of the activists picked up in raids across several states on August 28. The Maharashtra Police had arrested the activists on August 28 in connection with an FIR lodged following a conclave — Elgaar Parishad — held on December 31 last year that had later triggered violence at Bhima- Koregaon village.

The five activists — Varavara Rao, Arun Ferreira, Vernon Gonsalves, Sudha Bharadwaj and Gautam Navlakha —  are under arrest at their respective homes since August 29. The day after they were picked up, the SC had ordered that they be kept under house arrest.

Along with historian Thapar, others who sought their release and independent probe into the matter included economists Prabhat Patnaik and Devaki Jain, sociology professor Satish Deshpande, and human rights lawyer Maja Daruwala. While one petition was filed by the five citizens a day after the arrests on August 28, an intervention application was also filed on behalf of five activists – Shoma Sen, Surendra Gadling, Mahesh Raut, Rona Wilson and Sudhir Dhawale – who were arrested in June.

The SC had said yesterday that it would look into the case with a hawk’s eye as liberty cannot be “sacrificed at the altar of conjectures”.

It had told the Maharashtra government that there should be a clear-cut distinction between opposition and dissent on one hand and attempts to create disturbance, law and order problems, or overthrow the government on the other.

The defence also alleged that the entire case was cooked up and adequate safeguards should be provided to protect the liberty of five activists.

The apex court had earlier said that it may order a Special Investigation Team (SIT) probe if it found that the evidence has been “cooked up”.

The hearing on Thursday saw heated exchanges when Abhishek Manu Singhvi, appearing for the petitioners, said the letters placed before the court as evidence of the crime were made public by the Maharashtra police officer Param Bir Singh at a press conference, creating a prejudice against the activists.

He placed before the court a transcript of a show on NDTV, in which the officer participated and spoke about the letters, which revealed an alleged plot to kill Prime Minister Narendra Modi.

Intervening, senior lawyer Harish Salve, appearing for the complainant Tushar Damgude, wanted to know how the petitioners obtained a copy of the letters.

Mehta said the letter that had alleged a plot to assassinate Prime Minister Modi was revealed by the officer during the press conference. However, he said the activists also had access to the letters since it was from them that the letters were recovered.

Singhvi said despite finding out about a grave conspiracy, the police have still not filed an FIR on the alleged assassination plot.

Earlier, Mehta submitted that the police have corroborated information mentioned in 13 different letters recovered from the arrested activists, allegedly written to and received from Maoist handlers. “We have evidence to show they followed the instructions and went to places mentioned,” he said.

Mehta said evidence recovered goes back to 2012 and that it would be absurd to claim that the police have been planting evidence for six years continuously to make these arrests. He also questioned the rationale of the intervening petitions, stating that when arrests have been made and the lower judiciary has taken cognisance, the question of habeas corpus will not arise.

Mehta, while taking the court through the evidence collected so far, said the investigation is being conducted responsibly as per law.

Harish Salve said the line the court should draw is between dissent and unlawful activity.

Salve also said just because the party in power is associated with a particular ideology, cases against the activists perceived to be of another ideology cannot be dismissed as motivated. “This is akin to a vote of no confidence against a resilient system,” he asserted.

In his rejoinder to Mehta’s arguments, senior lawyer Abhishek Manu Singhvi, appearing for the petitioners, said despite nine months since the filing of the FIR in January, the two former judges who had openly claimed to have organised the Elgar Parishad event have not been questioned.

Singhvi said the transit remands for taking the five arrested in August to Pune were based on disclosure statements of the activists arrested in June. “They did not rely on the 13 letters,” he said.

Chief Justice Misra intervened to state that admissibility of evidence will not be decided by the Supreme Court as it was the job of the magistrate handling the case.

Questions about letters cited by police

Lawyer Anand Grover said there were discrepancies in the letters written in Hindi as Marathi font and phrases have been used. At this point, Justice Chandrachud also pointed to such a usage from one of the letters.

Singhvi said that his clients are “nowhere in the FIR”. “The entire object of the proceedings against these accused is to create a subtext of plot to assassinate the prime minister,” Singhvi said.

“The Maoist plot isn’t mentioned in any record produced in court. The entire experience by the Maharashtra Police is to rope the people ex post facto,” Singhvi said. “The transit remand application is based entirely on Bhima Koregaon and has no mention of the three letters,” he pointed out in court.

Here, Salve interrupted Singhvi but the latter objected saying, “Interventions that too by an intervenor.” Singhvi then asked that how can a man in jail write a letter, referring to Professor Sai Baba.

Singhvi also pitched in: “Your Lordships have sufficient Marathi bench strength,” he said, referring to Khanwilkar and Justive DY Chandrachud on the bench.

After going through the letters, senior advocate Anand Grover said, “The letter allegedly written by Sudha Bharadwaj and Ronal Wilson contains Marathi words which they could not have written as they are Hindi speaking… Letters by Rona Wilson and Sudha Bharadwaj written in Hindi include words that only Maharashtrians could have written. That is why I am saying this case is cooked up,” Grover remarked.

The court then concluded the hearing, ordering the written notes to be filed by Saturday.