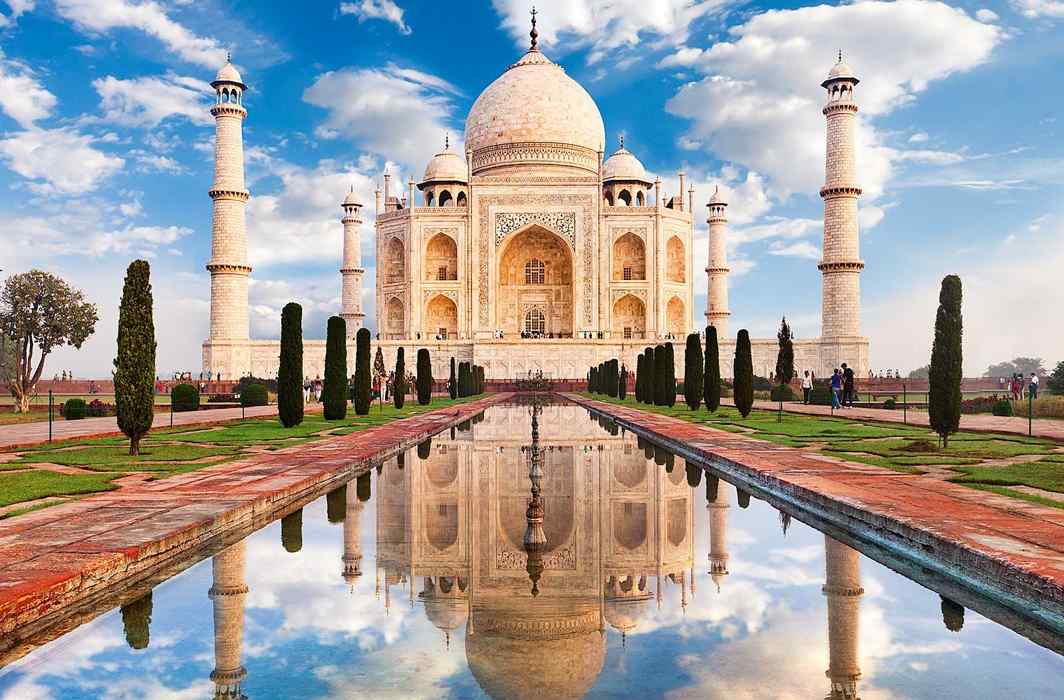 Uttar Pradesh chief minister Yogi Adityanath may have tried to end the controversy triggered by his party colleagues over the Taj Mahal by asserting that the marble mausoleum was built by the “blood and sweat of Indian labourers” but the Hindu Yuva Vahini – an army of rogue right-wing lumpens founded by him – seems bent on keeping the debate over the monument’s past alive.

On Monday, some members of the Hindu Yuva Vahini’s (HYV) Aligarh unit reached the Taj Mahal along with representatives of fringe right-wing group, Rashtriya Swabhiman Dal, and began chanting the Shiv Chalisa in violation of rules that prohibit offering of prayers inside the premises of the UNESCO World Heritage Site. The incident comes days ahead of Yogi Adityanath’s scheduled visit to Agra on October 26 during which he is also expected to visit the Taj Mahal.

The HYV goons led by the Aligarh unit chief Bharat Goswami reiterated the claim made by Vinay Katiyar, the controversial BJP MP from Kanpur, recently to state that the mausoleum of Mumtaj Mahal built by her husband, Mughal Emperor Shah Jahan, was originally a Shiv temple called Tejo Mahalaya.

Sources said that the activists were stopped from chanting the Shiv Chalisa within the Taj Mahal premises by the CISF personnel who are responsible for security at the monument. The HYV members were reportedly detained by the CISF and asked to tender a written apology for the act before being let off. The CISF however declined to reveal the identity of the detained right-wing activists.

During the argument between the HYV members and the CISF, Goswami purportedly said that the Hindu Yuva Vahini was being stopped from worshipping Lord Shiva during the reign of ‘Hindu Sarkaar’. He claimed that Monday is dedicated to Lord Shiva under the Hindu customs and so they wanted to recite the Shiv Chalisa inside “Tejo Mahalaya”, referring to the Taj Mahal by the name coined by BJP-RSS sympathizers and right-leaning self-styled historians to ascribe a Hindu past to the monument.

The Taj Mahal – indisputably the biggest tourist attraction in Uttar Pradesh – has been at the centre of a controversy for the last several weeks now. While the monument was omitted by the Yogi Adityanath government’s tourism department from a brochure on tourist hotspots in the state earlier this month, BJP MLA Sangeet Som and MP Vinay Katiyar had later dubbed the stunning 17th Century marble mausoleum as a “blot on Indian culture” and a “Hindu temple” respectively.

On Monday, actor Prakash Raj – who was trolled by right-wing rogues recently on Twitter for criticising Prime Minister Narendra Modi’s silence over the brutal killing of senior journalist Gauri Lankesh and the abuses hurled at her by Twitter users followed by Modi – also joined the debate over the Taj Mahal to take a swipe at those disputing its past.

The popular actor, through a post on Twitter, wondered whether the Taj Mahal would “be a past in our future”.

#justasking .....Will this worlds wonder #tajmahal be a past in our future ..??? pic.twitter.com/4tTvBHr7UR