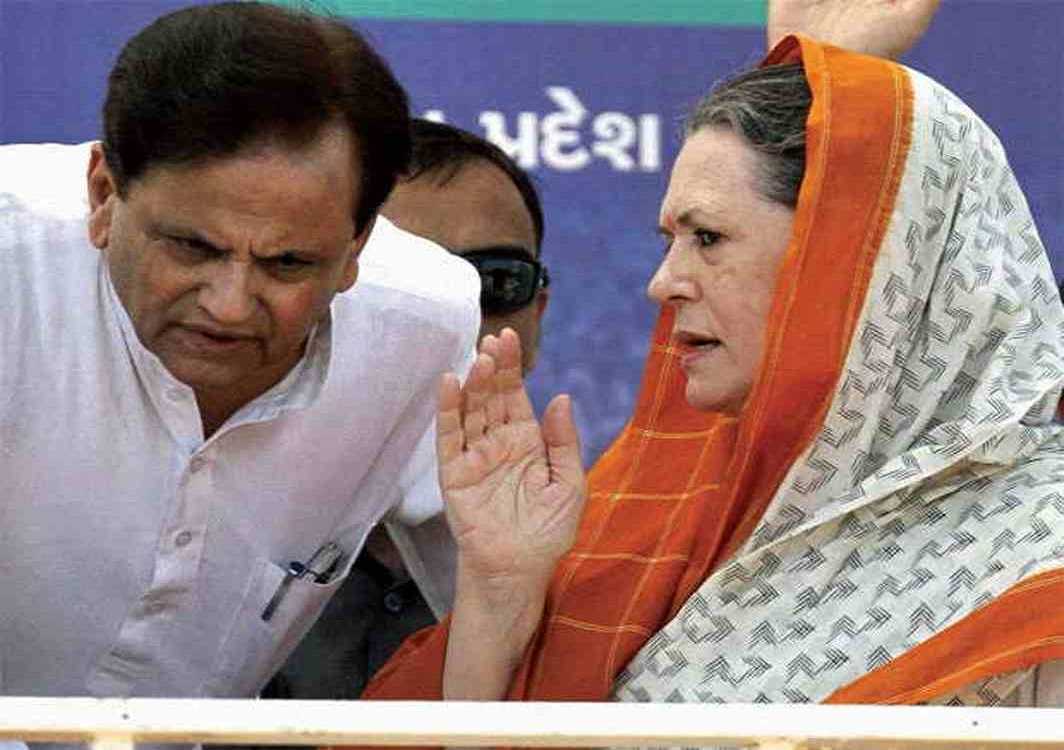 It would be rank bad form to describe Ahmad Patel as a form of life under Sonia Gandhi’s furniture, because the entire Congress Working Committee defers to him as “Ahmad Bhai” with varying degrees of insincerity.

Look, how he came out of the throng which was blocking his path to the Rajya Sabha. P. Chidambaram, Ghulam Nabi Azad, Anand Sharma would not be marching back and forth from the Election Commission past midnight pleading for “Ahmad Bhai” had the Congress President not monitored the events, remote in hand, on a minute by minute basis.

She must have been close to a nervous breakdown when the numbers of Gujarat party MLAs sank from 57 to 43 who had to be whisked away to a Karnataka holiday resort to stop further hemorrhage. Even then a couple dug burrows to sneak out. If those two exhibitionists had not been caught flashing before “unauthorized persons”, Ahmad Bhai’s goose had nearly been cooked.

It is, of course, fake news that in celebration, he lifted up his arms in front of Sonia Gandhi and sang:

(From the eye of the storm have

I rowed the boat to the bank)

Parties fight to advance their mission or when parties face adversity. The Congress fights when chosen leaders are in trouble. A reversal for Ahmad Patel in Gujarat would have been an enormous loss of face for Sonia. By helping her keep her face what does the party gain? That would be a hurtful question to the deluded who are convinced that one day the Congress, like the Phoenix, will rise again.

There are other important, unproven stories. Sonia and, by extension, “Ahmad Bhai”, have to be somehow saved because they have the key to the treasure. This is the testimony of Congressmen who have picked up their marbles and walked away from the game. And their tribe is growing.

That “Ahmad Bhai” made such heavy weather of a solitary seat reflects on a matter of some political value. “Ahmad Bhai” is no mass leader. He would not be able to collect 100 persons for his meeting. He is a maestro in pre and post electoral politics – the consummate fixer across the political field, particularly in Gujarat where a great deal of back scratching between him and the likes of Amit Shah has gone on for some time. In direct proportion to the growing self confidence of the Modi-Shah duet, such deals may now onwards be at a discount. They may even be discontinued without notice. Were Ahmad Bhai’s travails parts of this shifting of gears by the two “Gujjus” because they are on a winning streak?

Ahmad Bhai’s deal making abilities in Gujarat became the subject of some speculation even on the eve of the 2014 elections when Priyanka Gandhi Vadra, warned of an impending Congress rout, turned up to save her mother and brother by campaigning in Rae Bareli and Amethi. She did save them.

Her pitch was shrill. Her family was being “humiliated” by the BJP. They were targeting her husband’s land deals. Like her grandmother, she would fight back, she said. She then unleashed her finest invective on Narendra Modi’s “snoop gate”, how the Gujarat strongman had allegedly organized surveillance of a woman architect across these states.

Poor Priyanka did not even know that a few days ago there was a front page cabinet announcement that matters of such sensitivity will now only be handled by the next union cabinet. Priyanka could scream herself hoarse on “snoop gate”, “Jashodaben”, “Ishrat Jehan” but it was now so much shouting into the wind. Her leaders, “Ahmad Bhai”, and Manmohan Singh included, had waved a white flag at Modi. An electorate on the eve of a key election may be forgiven for being totally befuddled at the turn of events. How should the common man know that the deal has been struck because Sonia does not want Priyanka to worry herself sick about Robert Vadra’s travails.

That even so, there is an occasional eruption of fierce sloganeering against each other is, according to Congress sources, a possible part of a broad understanding.

What Shankersinh Vaghela told a group of journalists during the 2002 Gujarat riots sheds light on “Ahmad Bhai’s” genius. Just imagine, the leader of the opposition, Sonia Gandhi, did not even visit Ahmadabad after it had witnessed the most ghoulish pogrom.

“Had Sonia gone on hunger strike outside Raj Bhawan in Gandhinagar on February 28 (peak of pogrom), the situation would have been controlled”, Vaghela said. Fingers were pointed at “Ahmad Bhai”, for having advised Sonia against visiting Gujarat.

All of this has history behind it. It fits into the Congress unprecedented victory in 1984 being seen by the party as majoritarian consolidation against the minorities, in this instance the Sikhs. But the floodgates had been opened. By 1986, the most secular of congress General Secretaries, V.N. Gadgil, told me with considerable alarm:

“A feeling is growing among Hindus that Muslims are being appeased.” The Congress had turned. Rajiv Gandhi was to go far on this route. He gave the call for Ram Rajya in 1989 from the hallowed precincts of Ayodhya.

How appeased the Muslims were became clear after the Sachar Committee report in 2005. The Sonia-Manmohan duet did nothing to implement recommendations following the report.

Pundits are shy of admitting that what we have in competition are two parallel efforts at Hindu consolidation: one is pursuing an aggressive Hindutva agenda, an awesome machine on the roll. The Congress, which has already crashed between two stools, remains frozen but only on one stool. The other stool has been moved from the drawing room. The party is ever cautious not to be seen with Muslims on issues that might drive away the Hindu vote which, alas, is already proceeding towards the BJP, in single file or, maybe, two.

In this critical moment, Rahul is inspiring poetry. A variation on the old limerick:

As Congressmen went up the stair

They met Rahul who wasn’t there

He wasn’t there again today

We wish, we wish he’d stay away”