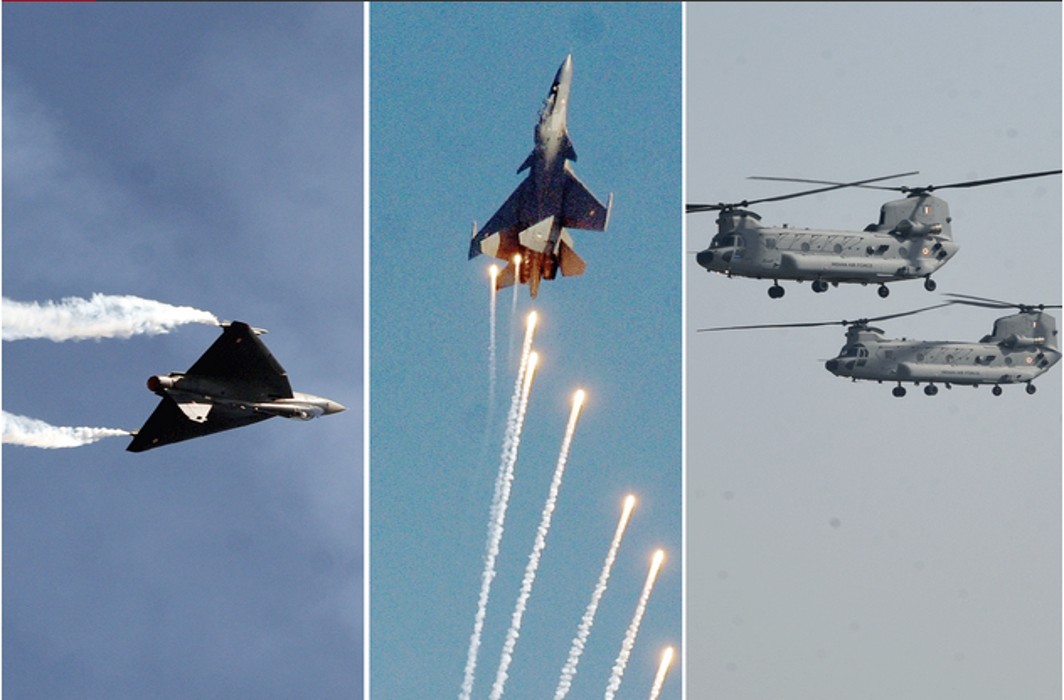 The 87th birth anniversary of the Indian Air Force (IAF) today – Tuesday, Oct 8 – will see induction of its newest multirole fighter jet Rafale at a handover ceremony in Merignac in France, with Defence Minister Rajnath Singh, who is in France, taking delivery of the first Rafale made by French firm Dassault Aviation.

The IAF posted a promo video on Twitter and Facebook, with a brief depiction of Balakot airstrike and the air combat the following day.

#AFDay2019 : Promo video on the occasion of 87th Anniversary of Indian Air Force.

Wing Commander Abhinandan Varthaman led a formation of the MiG-21 Bison, with heroes of Balakot airstrike, flying in an ‘Avengers’ formation. Wing Commander Varthaman was awarded the Vir Chakra for shooting down a Pakistani F-16 in February. His aircraft also was downed by enemy fire.

Invoking the Balakot airstrike, Air Chief Marshal RKS Bhadauria said it was the duty of the air warriors to remain combat-worthy and alert at all times amid the “present security environment in the neighbourhood.”

Addressing IAF personnel and their families on the 87th birth anniversary of the Air Force, he said, “All Air Warriors should serve with great integrity at all times.”

“The IAF achieved a whole lot in the last year and showed its capabilities to carry out special operations. We carried out the Balakot airstrike successfully this year. We aim to further raise our operational preparedness. Apart from combat skills, the IAF has been at the forefront of providing humanitarian aid and in search and rescue operations,” the Air Chief Marshal said.

Two squadrons of the IAF – 51 Squadron and 9 Squadron – which played a role in the air strike in Pakistan’s Balakot in February, were decorated with citations.

“Forty indigenous projects have already been incorporated by the IAF and another 122 projects are under development. The advanced fifth generation aircraft to be made indigenously in India has already been launched,” the Air Chief Marshal said.

The IAF also posted a clip of the whole show on Air Force Day (air show starts after 1:34:30)

The air show by the IAF started with flag-bearing sky divers of the Akash Ganga team dropping out of an AN-32 aircraft in their colourful canopies.

Next came the Chinook heavy-lift twin-rotor transport helicopter and the Apache attack helicopters, being showcased for the first time. Both these helicopters were acquired from the US and inducted into the IAF in the last few months.

The flypast included a spectacular manoeuvre by the Russian-origin multirole fighter jet Sukhoi-30MKI. The Light Combat Aircraft (LCA) Tejas also made several manoeuvres in the air as the crowd below cheered for it.

A flypast of vintage planes including the Dakota that had served the IAF for over 40 years was also carried out over Hindon. The Dakota DC-3 aircraft of the 1940s was used till 1988. It was one of the most versatile transport aircraft of its time.

The Indian Air Force was set up on October 8, 1932, with an initial strength of only six Royal Air Force-trained officers and 19 Havai Sepoys (air soldiers). The aircraft inventory comprised four Westland Wapiti IIA army co-operation biplanes, according to the information on IAF website.

Rajnath Singh will meet with French President Emmanuel Macron in Paris today as he takes delivery of the first of the 36 Rafale aircraft that India bought from France. He will perform a ‘Shastra Puja’ on Dussehra today. While the formal handover ceremony takes place today, the first batch of four Rafale jets will fly to their home base in India by May 2020.

Prime Minister Narendra Modi gave his wishes in a tweet this morning: “Today, on Air Force Day, a proud nation expresses gratitude to our air warriors and their families. The Indian Air Force continues to serve India with utmost dedication and excellence.”