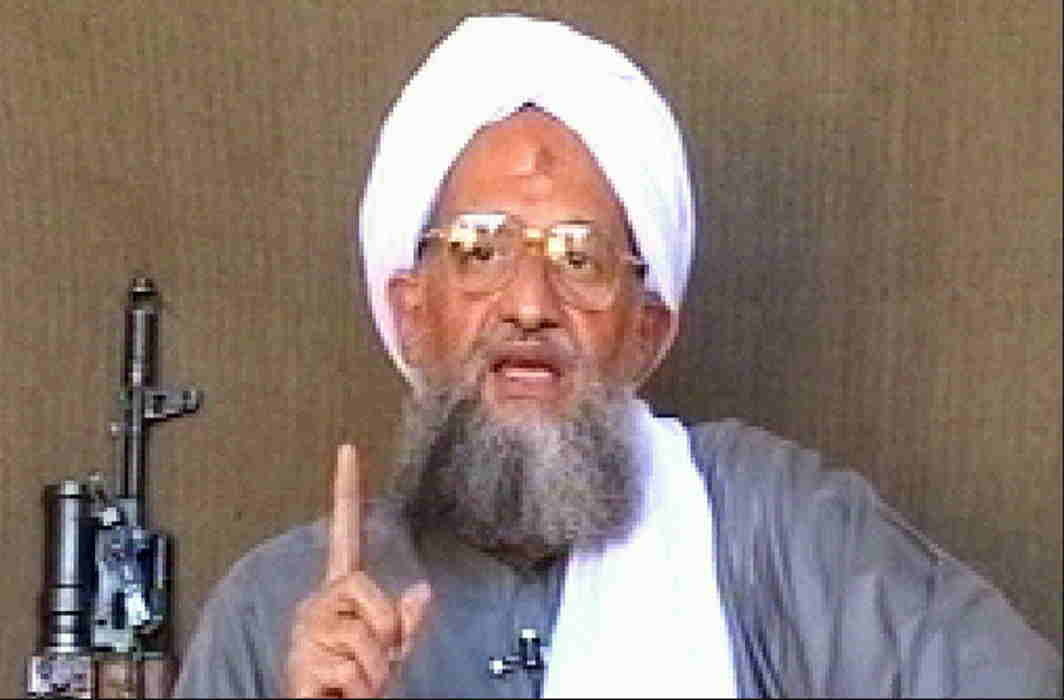 Terror group Al Qaeda’s chief Ayman al-Zawahiri has called upon “Mujahideen in Kashmir” to inflict “unrelenting blows” on the Indian Army and government in Jammu and Kashmir, according to a report from American website Foundation for Defence of Democracies’ (FDD) Long War Journal.

The report by Thomas Joscelyn said Zawahiri’s statement was released in a video by Al Qaeda’s media arm As-Sahab, which transcribed his latest message, titled “Don’t Forget Kashmir”, in Arabic and English.

“I am of the view that the mujahideen in Kashmir – at this stage at least – should single-mindedly focus on inflicting unrelenting blows on the Indian Army and government so as to bleed the Indian economy and make India suffer sustained losses in manpower and equipment,” Zawahiri said. “In doing so, the mujahideen must persevere patiently.”

The Long War Journal said Al-Qaeda has been grooming a group – the Ansar Ghazwat-ul-Hind, its Kashmir cell – towage jihad against Indian security forces in Kashmir.

Zawahiri did not name thisgroup but the video flashed an image of Zakir Musa, who led the group and was killed by security forces in an encounter in Tral area of Pulwama district in May. The following month, Hameed Lelhari was appointed the new chief of Ansar Ghazwat-ul-Hind.

In his 14-minute speech, Zawahiri said the “fight in Kashmir” was not a separate conflict but a part of the worldwide Muslim community’s battle against an array of forces. He called on “unnamed” scholars to propagate this point.

“You (the scholars) must clearly state that supporting the jihad in Kashmir, the Philippines, Chechnya, Central Asia, Iraq, Syria, the Arabian Peninsula, Somalia, the Islamic Maghreb and Turkistan is an individual obligation on all Muslims, until sufficient strength is achieved to expel the disbelieving occupier from Muslim lands,” he said.

Wearing a white colour turban and a long white shirt, Zawahiri in his speech calls Muslims around the world to “strongly empathise” with the cause – Jihad for the implementation of Shariah – of Kashmir. He also asks Muslims to express sympathies and extend support to the people living in the state.

He said mosques, markets and places where Muslims in Kashmir gather should not be targeted.

Zawahiri described the Pakistani Army and government as “toadies of America”. He claimed that Pakistan had prevented the “Arab Mujahideen” from “heading to Kashmir after expelling the Russians from Afghanistan”.

“All the Pakistani Army and government are interested in is exploiting the mujahideen for specific political objectives, only to dump or persecute them later,” Zawahiri added.

He claimed Pakistan’s conflict with India “is essentially a secular rivalry over borders managed by the American intelligence”.

Zawahiri while cautioning Kashmir’s pro-Pak terrorists says that “Pakistani government and its army is interested in exploiting terrorists for specific political objectives… only to dump or persecute them later.”

The Al Qaeda chief also talks about how Pakistan after surrendering to U.S post 9/11 arrested, sold, persecuted and killed Taliban and al-Qaeda fighters and how it provided safe houses to America to bomb Afghanistan and “in return received bribes”.Zawahiri in the video says that the relationship between U.S and Pakistan are that of a “petty thief and a gang’s boss” who complain to each other. “However, the cooperative alliance between the two continue to prosper,” he adds.

In a series of suggestions to Kashmir terrorists, he says “the first vital step is to turn the Jihad in Kashmir into Jihad for the sake of Allah…to liberate Kashmir jihad from the clutches of Pakistan intelligence agencies.”

Media reports said some experts suggest the involvement of the Pakistani ISI in putting out the video to show that it is not supporting terror.

Security agencies were reported to hold the Qaeda video is prompted by the government’s success in checking terror incidents in Jammu and Kashmir and isolating separatists.

“There has been a fall in terror attacks and a rise in the killing of terrorists in Jammu and Kashmir. The video is an attempt to motivate terror cadre,” a home ministry official was quoted by NDTV as saying.