If Monday blues were not enough, this Oreo Pakoda will ruin your day! WATCH 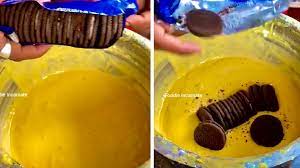 After enjoying the long weekend, Diwali festivities and the perfect festival food, people are back to their regular lives and are surely dealing with Monday blues. However, if Monday blues were not enough to make you feel gloomy then we just got our hands on Oreo Pakoda, and we can’t deal with things anymore now, and after watching that, we are sure, you’ll be divided too.

Recently, a video went viral on the internet in which it can be seen that a man was dipping Oreo biscuits in the Besan batter and was deep-frying those biscuits to make Oreo Pakoda. Soon after that, the video started doing rounds on the internet, several users were disgusted after watching the video.

One of the users wrote that someone please bomb Amdavad Oreo pakoda.

Another wrote that why are people making such cringe food.

Yet another wrote that people have so bad taste.

This viral video was shared on the youtube channel ‘Foodie Incarnate’ which is quite popular amongst the netizens. This popular channel is run by a food blogger named Amar Sirohi. Unsurprisingly, Amar Sirohi (food blogger) was himself amazed by this bizarre recipe of oreo pakoda.

You won’t believe but this bizarre oreo pakoda video of foodie blogger, Amar Sirohi has crossed 1.1 lakh views in just 3 days. Also, there are 7.1K likes on this video. In this video, we can clearly hear Sirohi asking about the price of bhajiya (oreo pakoda) and it’s only Rs 30 per 100 gm.

If you also want to try this peculiar oreo pakoda then you can visit Rokadiya Bhajiya’ in Bhopal, Ahmedabad.

Earlier, a video went viral in which it was shown how to prepare Rasgulla biryani that turned off the netizens. People said that after watching that video, they were feeling nauseated.