Sidhu vs Amarinder: No end to tussle, more gossip floating about 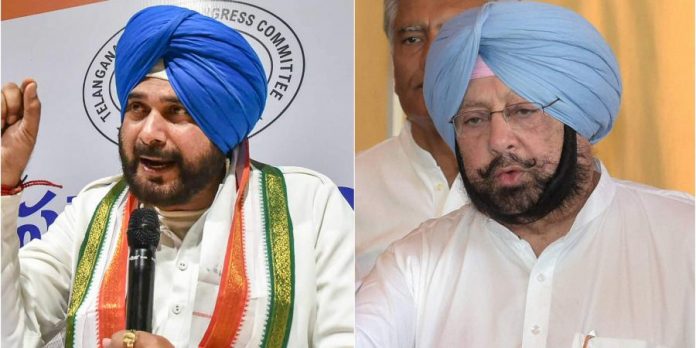 Amid escalating confusion in the Punjab Congress, almost mirroring its dithering at the national level, alleged rebel Navjot Singh Sidhu met party president Sonia Gandhi and general secretary in-charge of Punjab Harish Rawat in Delhi. The usually easy-with-quotes Sidhu kept mum for once when the media accosted him for his reaction.

While it has been very clear that Punjab Chief Minister Amarinder Singh does not want Sidhu landing up as the PCC chief replacing Sunil Jakhar, the rumours of Sidhu’s imminent ascension died a quick death when Harish Rawat denied making any such forecast or prediction about the former India opener as the Punjab PCC chief.

Rawat insisted he had come to submit his note to Sonia Gandhi, and once the party president took the decision regarding Punjab Congress, he will inform the media.

On Thursday, all kinds of rumours were doing their airing. Some said Amarinder Singh and Navjot Sidhu had agreed on a formula, allowing the Patiala royal to retain the CM’s post while Sidhu will be the Punjab Congress chief and will mount a defence of the government ahead of elections to the Assembly next year.

But like all rumours floated in the day, they were dead by 9 pm. The Punjab CM and his rival were closeted with their respective supporters.

Some details of the plan that died in eight hours or less pointed to two working presidents of the Punjab Congress from the Hindus and Dalits. Sidhu will replace Sunil Jakhar. There were no names for who will lead the Dalits. Representation of Dalits was one of the demands put forward by MLAs last month when they submitted their representation to the three-member committee set up by Sonia Gandhi to resolve this unending tussle. The committee met both leaders as part of its deliberations.

There were indications of a possible resolution this week as Sidhu had attacked the Punjab CM over the power crisis and the 2015 case involving the desecration of the Guru Granth Sahib and police firing during peaceful protests. An import from the Aam Aadmi Party, Sidhu had turned up the volume by praising former leader Arvind Kejriwal to spite the Punjab CM.