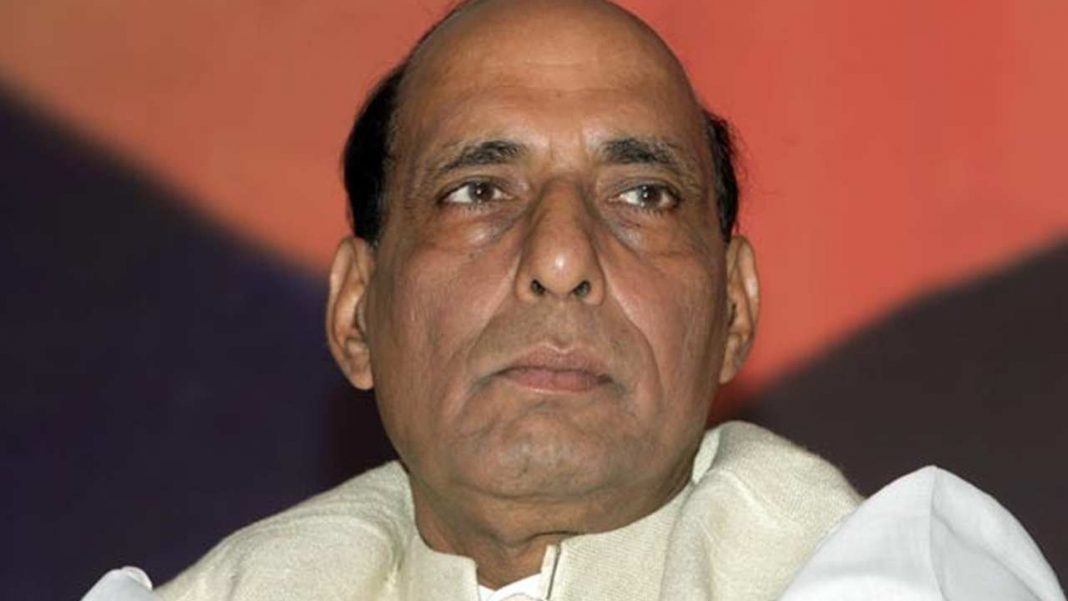 Union home minister to spend two days each in the Valley and Jammu region, will speak to Governor, political leaders, Armed Forces and common folk on range of issues. Former chief minister Farooq Abdullah says he isn’t hopeful of any outcome from the visit

Amid soaring tensions across Jammu and Kashmir over the controversial issue of possible repeal of Article 35A, Union home minister Rajnath Singh and a high-level delegation of his ministry arrived in Srinagar, on Saturday, for a four-day visit to the restive state. The home minister has stated that he is visiting J&K with an “open mind” and is will meet anyone “who is willing to engage in a dialogue on finding a solution to the Kashmir problem”.

During his stay, Singh is scheduled to meet J&K Governor NN Vohra, chief minister Mehbooba Mufti, members of the Armed Forces and paramilitary posted in the state and a cross- section of common citizens.

It may be recalled that while addressing a BJP event in Lucknow on August 18, Singh had said that the Prime Minister Narendra Modi-led Union government will find a solution to the “Kashmir problem” by 2022. While that may be a tall and ambitious target, Singh’s immediate challenge will be to quell rising tensions in the Valley over the upcoming verdict of the Supreme Court on a petition that seeks quashing of Article 35A – a provision in the Indian Constitution under Article 370 that grants special rights and privileges to the State and its citizens.

During proceedings in the case, the Centre had – through its Attorney General, KK Venugopal – for the first time taken a stand that the petition against Article 35A raised “very sensitive” questions that required a “larger debate”. Prior to Venugopal’s submission on behalf of the Modi government, successive Union governments had stood by the J&K government and told various courts that Article 35A would not be diluted in any form.

Venugopal’s suggestion had indicated that the ruling BJP – which has advocated repealing Article 35A in its successive poll manifestos over the past few decades – would not stand with the J&K government if the apex court decided to quash Article 35A. J&K chief minister Mehbooba Mufti had, in what was hitherto thought unthinkable, personally driven down to meet her arch political rival, National Conference chief Dr Farooq Abdullah, to discuss ways of ensuring that the Article – which she said was “synonymous with J&K’s existence as an Indian state” – is not repealed.

While the Union home minister will definitely hear the opinion of Mufti and other political stakeholders in the state on the Article 35A issue, it will be interesting to see how Separatists in the Valley – both hardline and moderate factions of the Hurriyat Conference – respond to Singh’s visit.

Singh’s visits also coincides with the ongoing raids by the National Investigation Agency (NIA) against Separatist leaders in the Valley – including high-profile members of the Hurriyat Conference like Syed Ali Shah Geelani and his family, Mirwaiz Umar Farooq, Yasin Malik and others – with the ostensible aim of finding the source of their funds, which the investigating agency has claimed come from Pakistan “to fund terror and violence in Kashmir”. The Hurriyat leaders have been extremely vocal against the NIA raids.

Another thing to look out for will be Singh’s discussions with officials of the Indian Army and paramilitary forces. Ever since the killing of Hizbul Mujahideen commander Burhan Wani in July last year, every encounter of an alleged terrorist or militant – local or Pakistani – that has taken place in the Valley has resulted in violent protests by the civilian population against the security forces. The use of human shields, pellet guns, pava shells, etc by the security agencies, particularly the Indian Army against the civilians has further intensified tensions in the region. In fact, even on Saturday, shortly before Singh’s arrival in Srinagar, an alleged militant was gunned down by security forces in a joint operation with the state police in Baramulla district’s Sopore town.

During his four day visit, the Union home minister will travel from Srinagar to Anantnag, Jammu and Rajouri. He is being accompanied by Union home secretary Rajiv Gauba and other senior bureaucrats of the ministry. Singh is expected to review works carried out in the state under the Prime Minister’s Development package and attend a Comprehensive Security Review meeting with the Cheif Minister and the top brass of the Army, CRPF and J&K police. Meetings with students and common citizens are also on the cards while no interaction with Separatist/Hurriyat leaders has been scheduled.

But will Singh manage to make the Kashmiri people believe that Prime Minister Modi’s assertion in his Independence Day address of solving the problems of Kashmir “by embracing people” and not by bullets and recrimination is indeed a line that the Union government was willing to pursue?

Former J&K chief minister Farooq Abdullah, the tallest political leader in the state at the moment, has said that he did not expect any concrete outcome from Singh’s visit.

“I have no expectation at all. He (Singh) will come; he will meet as he had done before. He led a delegation of MPs (earlier). What happened to that delegation and their recommendations? Nothing happened then and I expect nothing to happen now,” Abdullah told reporters ahead of Singh’s visit.