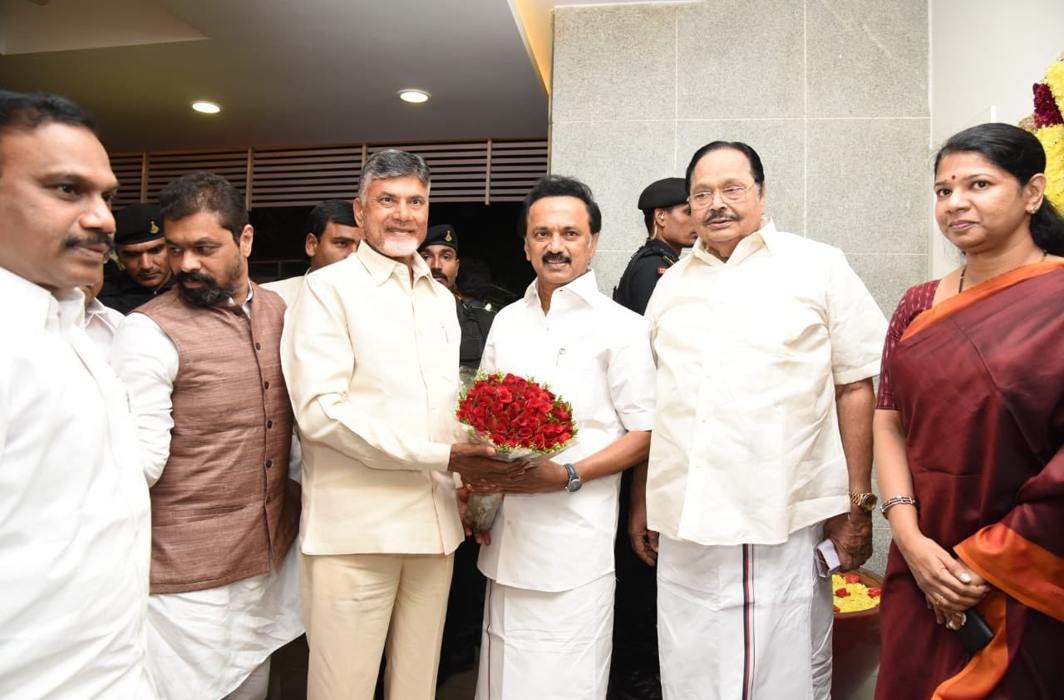 In the “now it’s there – ‘now it isn’t” alliance-building efforts of opposition parties against the BJP, Telugu Desam Party (TDP) leader and Andhra Pradesh Chief Minister Chandrababu Naidu has been meeting opposition leaders across the country to tie up grand alliance to take on BJP in the Lok Sabha Elections 2019.

The Andhra chief minister was a BJP ally till March this year, when he exited the NDA over his state not being granted special status.

After meeting Janata Dal (Secular) leaders and Karnataka chief minister HD Kumaraswamy, Nadu met Dravida Munnetra Kazhagam (DMK) president MK Stalin at his residence in Chennai on Friday. Other DMK leaders such as Rajya Sabha MP MK Kanimozhi and MK Alagiri were also present at the meeting where Stalin announced his party’s decision to support Naidu’s efforts to unite opposition parties against the ruling BJP-led NDA at the Centre.

“Regional leaders across India should immediately come together to oust BJP from power. Anti-national, anti-secular BJP rule needs to be stopped and Naidu has taken the efforts towards that. Naidu had met Rahul Gandhi. When he met Rahul, I had welcomed and supported it,” Stalin said.

Stalin urged leaders from all states to unite against the BJP at Centre, adding, institutions such as CBI, RBI and judiciary are supposed to be autonomous but the government does not allow that.

“Under the BJP rule at the Centre, states are losing their rights. Federal structure and democracy of the nation are facing a threat. I have been vocal on urging all the regional and federal forces to work together to remove BJP,” Stalin told reporters after coming out of the meeting.

“Since Chandrababu Naidu is concurring with my contention, he has called on me and asked DMK’s support to show doors for BJP. I assured him that we will stand together to remove BJP government from the centre,” he said.

Stalin also said that they will form a minimum programme plan to form the alliance.

“We, all the like-minded parties, will sit together and form a minimum programme plan for proceeding further. After that meeting, we will devise further strategies. Our only agenda is to work for removing BJP from the Centre,” Stalin said.

Speaking to the media, Naidu said when compared with Modi, Stalin is the better leader.

“I came here to request Stalin to join with us for saving the nation. Both the nation and democracy are in danger now. The BJP government is interfering with the autonomous institutions,” he said.

Naidu said he is trying to bring the opposition leaders on one platform. He said he has good relations with DMK and wants to work with the Congress to “save the nation”. TDP leader said they had differences with Congress for the last 40 years but will have to come together as Nation and Democracy are more important.

“We have good relation with DMK. We want to work with the Congress. We want to save nation and we want to protect the nation. We are together. I am only bringing them on one platform. They will decide how to take this forward. We have differences with Congress for last 40 years. But we joined together. Nation is important. Democracy is important,” Naidu told reporters after meeting DMK president.

“All of us are having some differences. But for the sake of protecting the nation, we should ignore the differences. As a major opposition party in the nation, Congress will play the role of an anchor in the Lok Sabha elections. I already met Rahul Gandhi. We have spoken a lot about this subject. Also, I will meet Mamata to discuss this,” he told reporters.

Naidu clarified he does not have any national ambitions behind his efforts to stitch an alliance saying, “Congress is the main opposition party. They have a pan India base. We are regional leaders. Mamta is strong in WB. Stalin is strong in TN. Am not face of this alliance. Am not any aspirant, I am only a facilitator.”

Targeting the government over “destruction” of key institutions, Naidu said: “CBI is completely defamed. See RBI today, even the RBI Governor prefers to quit. Interference by this government in such autonomous agencies, it never happened in the past.”

“The Enforcement Directorate and Income Tax are being used to malign and harass opposition leaders,” Naidu said, adding that the economy is in chaos.

Speaking of a “derailed banking sector and lack of confidence and escape of big time defaulters as NPA increases”, Naidu said “intolerance” towards other communities is increasing in India under the leadership of Modi.

He said people are prepared to defeat the BJP government now. Asked who would lead the Opposition alliance against the BJP, Naidu asked a reporter, “Have you got any benefit from the NDA government? You stood for so many days to get your money.”

When the question was repeated, Naidu said, in a lighter vein, “There are so many leaders. Even Stalinji is better than Narendra Modi.”

Naidu met his Karnataka counterpart HD Kumaraswamy and his father and former prime minister HD Deve Gowda of the Janata Dal (Secular) in Bengaluru on Thursday.