The unprecedented troops build up and clampdown in Jammu and Kashmir over the last few days came to a dramatic denouement today, Monday, August 5, with Narendra Modi government scrapping Article 370 of the Constitution that gave the state a special status.

The move, that evoked sharp reactions from many as well as fulsome praise from others, also proposed bifurcation of the state into two union territories, Jammu and Kashmir and Ladakh. While J&K would have a Legislative Assembly like Delhi and Puducherry, Ladakh would not have an Assembly – like Chandigarh, Andaman & Nicobar, Daman & Diu, Dadra & Nagar Haveli and Lakshadweep.

This has been on the agenda of BJP and Sangh parivar right from the start, from the time Article 370 was drafted in 1947.

Before this announcement, PM Narendra Modi called up NDA allies. A presidential order has withdrawn the 1954 order applying provisions of the Constitution to Jammu and Kashmir with modifications. A gazette notification to the effect was issued.

Shah said that President Ram Nath Kovind had signed an order that would come into force “at once”.

“The president on the recommendation of Parliament is pleased to declare as from 5th of August 2019, all clauses of the said Article 370 shall cease to be operative… ,” stated the resolution moved by the Home minister.

The announcement came after Prime Minister Narendra Modi held a meeting of his cabinet at his house this morning.

Jammu and Kashmir will also be “reorganised,” said the Home Minister, with the state’s bifurcation into two union territories, Jammu and Kashmir and Ladakh, the former with a legislature and the latter without one.

The Jammu and Kashmir Reorganisation Bill, which is expected to be passed in Rajya Sabha today, will be brought to Lok Sabha tomorrow.

BSP, BJD, YSRCP, Shiv Sena, AAP have extended support to the government’s move while Congress, TMC, DMK, MDMK and JD(U) have opposed the Bill till now.

Clause 7 of the Instrument of Accession signed by Maharaja Hari Singh declared that the State could not be compelled to accept any future Constitution of India. The State was within its rights to draft its own Constitution and to decide for itself what additional powers to extend to the Central Government. The Article 370 was designed to protect those rights.

According to the constitutional scholar AG Noorani, the Article 370 records a ‘solemn compact’. Neither India nor the State can unilaterally amend or abrogate the Article except in accordance with the terms of the Article.

It exempted the State from the complete applicability of the Constitution of India. The State was allowed to have its own Constitution.

Central legislative powers over the State were limited, at the time of framing, to the three subjects of defence, foreign affairs and communications.

Other constitutional powers of the Central Government could be extended to the State only with the concurrence of the State Government.

The ‘concurrence’ was only provisional. It had to be ratified by the State’s Constituent Assembly.

The Article 370 could be abrogated or amended only upon the recommendation of the State’s Constituent Assembly.

Once the State’s Constitutional Assembly convened on 31 October 1951, the State Government’s power to give `concurrence’ lapsed. After the Constituent Assembly dispersed on 17 November 1956, adopting a Constitution for the State, the only authority provided to extend more powers to the Central Government or to accept Central institutions vanished. Noorani states that this understanding of the constitutionality of the Centre-State relations informed the decisions of India till 1957, but that it was abandoned afterwards. In subsequent years, other provisions continued to be extended to the State with the ‘concurrence’ of the State Government.

Anticipating trouble, the centre has moved 8,000 paramilitary troops from different parts of the country to Kashmir, said reports.

The government’s step comes after a massive build-up of troops in the sensitive Kashmir Valley and a night where senior leaders including former Chief Ministers Omar Abdullah and Mehbooba Mufti were placed under house arrest.

Internet and phone lines have been forced out of service in parts of Jammu and Kashmir. Thousands of paramilitary troops have been sent to Kashmir after the government said it was cancelling the Amarnath Yatra, an annual pilgrimage, and asked tourists and outsiders to leave the state.

All educational institutions and offices are closed and groups have been banned from gathering in Kashmir and Jammu.

The announcement led to an uproar.

Former Attorney General Soli Sorabjee said it is not a wise decision taken by the Central government.

“I don’t think there is anything revolutionary here. It’s a political decision, even though it is not a wise decision,” Sorabjee told ANI.

Sorabjee also stated that it was “very unpleasant” to allegedly house arrest PDP chief Mehbooba Mufti and National Conference leader Omar Abdullah. “I think it’s very unnecessary. If not unnecessary, it is very unpleasant. It sent a wrong signal to the people of Kashmir. I don’t think it was so necessary to put them under the house arrest,” he said.

She said the government’s unilateral decision “to scrap Article 370″ is illegal and unconstitutional.

It will make India an occupational force in Jammu and Kashmir, Mehbooba said on Twitter.

“It will have catastrophic consequences for the subcontinent. GOIs intentions are clear. They want the territory of J&K by terrorising its people. India has failed Kashmir in keeping its promises,” Mehbooba, under house arrest in Srinagar, said on Twitter.

“Not sure how long I’ll be able to communicate. Is this the India we acceded to?” she asked.

“Government of India (GOI)’s unilateral and shocking decisions today are a total betrayal of the trust that the people of Jammu & Kashmir had reposed in India when the state acceded to it in 1947. The decisions will have far-reaching and dangerous consequences. This is an aggression against people of the State as had been warned by an all-parties meeting in Srinagar yesterday,” he said.

The government, he said in a statement, had resorted to “deceit and stealth” to lay the ground for these disastrous decisions.

“Those of us who gave democratic voice to the people of Jammu & Kashmir, are incarcerated as lakhs of armed security personnel have been put on the ground… A long and tough battle lies ahead. We are ready for that,” he said.

In BJP and its allies, the mood was triumphant.

His party colleague Ram Madhav also hailed the decision. “What a glorious day. Finally the martyrdom of thousands starting with Dr Shyam Prasad Mukherjee for complete integration of J&K into Indian Union is being honoured and the seven decade old demand of the entire nation being realised in front of our eyes; in our lifetime. Ever imagined?” he tweeted moments after Shah’s announcement.

Party spokesperson Shahnawaz Hussain said the move had opened the path of growth and development for Jammu and Kashmir.

Congress leader Ghulam Nabi Azad, calling it a dark day” in Indian democracy, said, “The BJP is drunk on power and the government acted like thieves in the night. Article 370 has been scrapped to help BJP get more votes. We had never thought that the state of Jammu and Kashmir would be destroyed this way.  BJP has wiped out Jammu and Kashmir’s identity and destroyed democracy. They’ve cut off head of the country. The party is playing with the integrity of the state.” 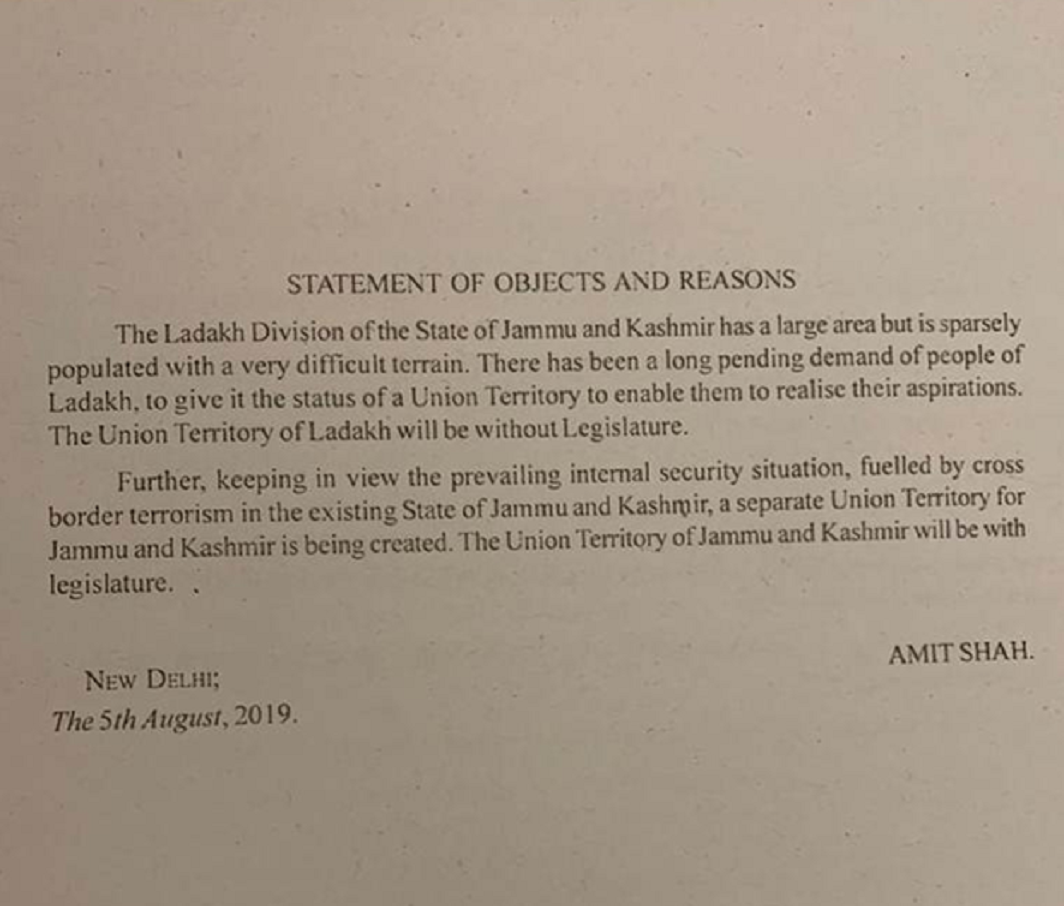 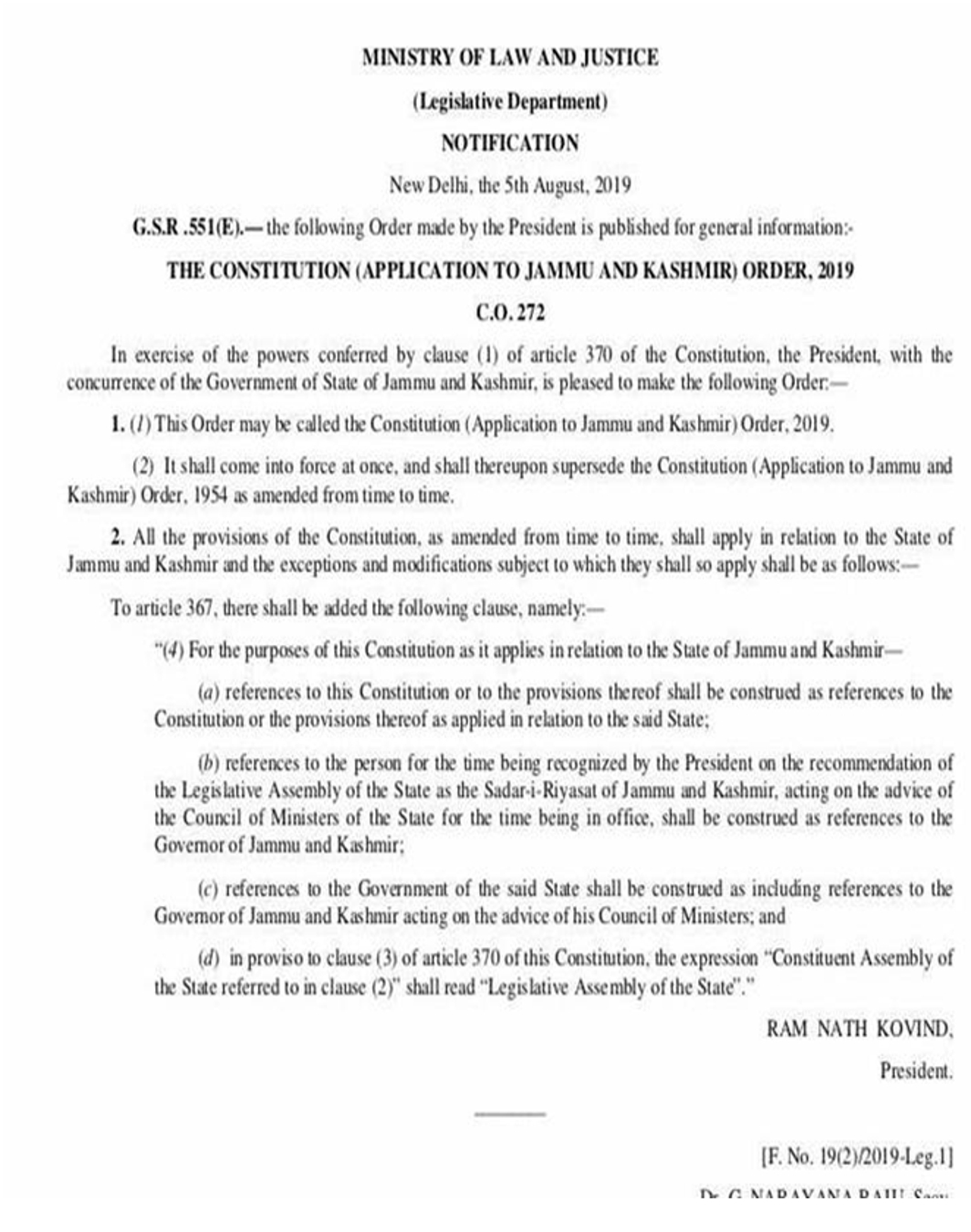